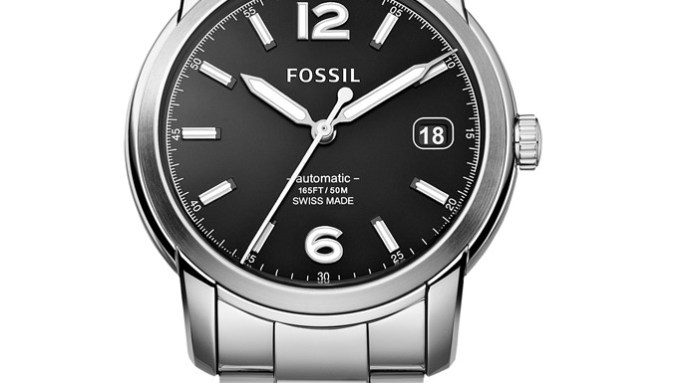 Fossil Inc. is releasing its first Swiss men’s watch collection this month, in the hopes of extending its reach to a higher-end consumer, particularly in Asia.

The collection, which will range from $695 to $995 and include automatic watches and chronographs, speaks to what Fossil deems a “growing demand” in Asia for luxe timepieces. In the past, Fossil has only carried mechanical watches with Japanese movements, which retail from $95 to $295. The launch of the Swiss collection comes at a time when the brand’s retail footprint in Asia is at “critical mass,” according to Fossil executive vice president Tom Kennedy.

“We’ve opened a significant number of stores in Japan, Korea, Singapore and Hong Kong,” he said, noting that in 2012 Fossil opened 16 doors in the Asia-Pacific region. “In the past three years, we’ve worked to position Fossil as a lifestyle brand. We’ve had the ability to significantly expand our price point through other categories, now it’s time to do it with watches.”

Fossil is focusing on the men’s market because, in Asia, the first watch purchase for the emerging middle class is typically a men’s timepiece. Kennedy said that “one in four Swiss watches that are sold globally are sold in Asia,” which makes the rollout potentially very lucrative.

The brand will roll out the watches, which include either a leather strap or a stainless steel bracelet, first in 60 Fossil stores globally. In Asia, the watches will be distributed in 19 doors, including in China, Malaysia, Korea, Japan, Singapore, Hong Kong and Macau, while in Europe, the watches will be in 17 locations, including stores in Austria, Germany, Switzerland, France, Italy and the U.K.

Fossil is also making a significant push in North America, where the watches will be available in 21 locations, including New York, Dallas, Miami, San Francisco, Houston, Las Vegas, Honolulu, Orlando and parts of Canada.

The clean yet sleek men’s collection, which is made of stainless steel, rose gold or gold plating, comprises 14 styles and is a departure of sorts from the look of a typical Fossil watch, even though there is a nod to vintage aviation and automobile dials.

“We wanted to show our design capabilities,” Kennedy said, adding that the collection is aimed to target rival brands such as Citizen, Longines, Hamilton, Tag Heuer, Seno, Oris, Breitling, Baume & Mercier and Rado.

“This [men’s launch] is part of a two-pronged strategy,” he said, explaining that while the women’s Swiss collection is a “longer-term” project, the goal of this launch is to broaden Fossil’s appeal to both new and existing customers.

“We view this as an opportunity to create a halo for the entire business and to show what is possible for the Fossil brand to execute,” he said. “This isn’t a replacement of our core business, it’s an extension of our portfolio.”