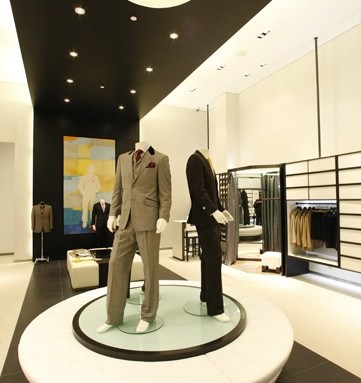 The custom suit has gone mass.

Once the exclusive province of tycoons, aristocrats and pedigreed tailors, made-to-measure suits now are being offered by a growing number of retailers and vendors at moderate prices and fast-fashion speeds. And by offering prices as low as $300, this growing wave is mounting a serious challenge to off-the-rack chains in the increasingly beleaguered suit category.

The trend is an unlikely turn of events for a sector better known for traditional and lengthy methods of production, high prices and a general focus on the monied, mature man. But even as traditional suit makers on Savile Row and global brands such as Brioni and Kiton continue to briskly sell custom suits north of $4,000, there appears to be growing demand from consumers, many of them younger men, who are responding to the notion of relatively low-price made-to-measure clothing.

That demand is fueling new businesses, like My.Suit, which creates a made-to-measure garment for $495 and delivers it in two weeks. Most bespoke and luxury brands deliver custom suits in six to eight weeks.

My.Suit, which opened a 3,000-square-foot store on New York’s Madison Avenue last month and also operates two other locations in the area, is owned by the South Korean conglomerate BK House, a privately held global company with more than 40 years of manufacturing and retail experience. “We’re a mass market custom suit store,” said James Hancock, vice president of sales, who added the store caters to men ages 25 to 45 and doesn’t sell suits for more than $1,000. “It’s like Build-a-Bear for grown men. This is the new way to build, buy and shop for a suit.”

My.Suit isn’t alone, however. Sartoriani, whose main showroom is on London’s Savile Row, opened its first New York City store in mid-January, where it sells a super 150s wool-cashmere suit for $995. In London, the deals are even more eye-catching, with two suits, two ties and two dress shirts selling for 995 pounds, or just less than $1,500. Like My.Suit, Sartoriani targets men who want “a luxury service at an affordable price,” said Marie-Royce Book, Sartoniani’s London-based managing director.

Other businesses have taken to the Internet. Indochino.com, which launched in fall 2007, calls itself the “fast-fashion” option for custom men’s wear. It makes suits (based on measurements customers take themselves) for as low as $300 and delivers in two weeks. “We’re bringing custom to the average person,” said co-founder Kyle Vucho, noting the company is able to produce so inexpensively because “there’s no middle man, no staffing, no storefronts.”

Another custom suit retailer, Astor & Black, has attracted 42,000 clients since it began in 2004 and is about to launch a service on its Web site that allows shoppers to reorder suits online. Suits start at $499 and the bulk of the business is at $895. Astor’s chief executive officer and founder, David Schottenstein, said the company has doubled in size every year and will have sales of more than $20 million this year.

“The opportunity for this market is massive,” Schottenstein said. “Better retailers have been able to meet the demand for custom, but no one is addressing a more moderate tier. Most big stores that sell these prices don’t have the service or expertise to do it.”

Given prices between $300 and $900, the new crop of custom retailers is going head to head with moderate and better department stores, which sell off-the-rack clothing at comparable prices.

Macy’s, which sells off-the-rack suits listed as high as $595, doesn’t offer custom services. Nordstrom sells made-to-measure suits from Hart Schaffner Marx and Joseph Abboud, the latter of which opens at $745. Bloomingdale’s retails off-the-rack suits as low as $695 and they go up to $2,195.

In fact, just as the custom suit business begins to gain steam, many department stores appear to be de-emphasizing their traditional suit offerings. Department stores rely increasingly on suit separates, in which the pant and jacket are sold separately and, more importantly, don’t require any tailors on staff to hem the pants.

The strategy raises the question: Could the midtier be missing a customer?

Marty Staff, ceo of JA Apparel Corp., thinks so. “Some midtier players would have a field day entering this business with sharper prices, but they don’t have the personnel,” he said. “Investing in made-to-measure is a logical extension and it could be a disaster for them if other businesses pick up the slack.”

The growth of custom suiting isn’t only benefitting new businesses. Individualized Apparel Group, a stalwart in custom men’s wear, said its made-to-measure suit business will be up double digits this year, led by its more moderately priced brands H. Freeman and Individualized Clothing, which sell made-to-measure suits as low as $895. Staff said the custom business for the Joseph Abboud brand will be up by as much as 50 percent this year.

“We are in the age of the consumer,” explained Staff, whose Massachusetts factory can turn a made-to-measure suit in five days. “He wants his products overnight, exactly to his specifications and gift wrapped. He wants something that can really fit him. He can customize everything else in his life. Why not suits?”

The interest in mass custom comes as the suit business continues to be challenged. For the 12 months ended December 2009, tailored clothing sales fell 10.4 percent to $3.28 billion, according to The NPD Group. Receipts for suits at department stores during the same period slumped 27 percent to $716.3 million.

Custom only accounts for a small percentage of the suit business (one executive pegged it at less than 10 percent), but custom suits — whether bespoke or made-to-measure — are gaining traction at all levels of the market. It’s a growth area for classic brands such as Dunhill, which just opened its first bespoke salon in the U.S. this month, and is even a new focus for designer brands like Buckler, which will start to offer custom suits out of its Gansevoort Street store in Manhattan next month. They will retail for around $1,200 to $1,500. Even Ralph Lauren is expanding its custom offering, with a fully handmade suit under its Purple Label that will retail for $10,000.

Custom’s growth has been fueled by what some see as a new generational attitude toward consumer products that has little to do with the traditions of bespoke tailored clothing. “You see so many younger customers coming into custom now,” said Joe Blair, president of IAG. “They customize everything they buy: their music, their shoes, what they read. This is a natural progression in a way.”

Men’s wear experts say mass market custom appeals to a younger customer who doesn’t care as much about the bespoke aspects of the garment and is more concerned with getting something they can essentially design themselves. “Instead of going to Macy’s and buying Tasso Elba, they’ll pay a little more for something that is made better and fits nicely. There’s value in that for a younger guy,” said retail consultant Jack Abelson of Abelson & Associates in Minneapolis. “I’m all for new ideas if it gets guys to wear suits. That’s good for the men’s wear industry.”

In a bid to appeal to this new customer, IAG is developing lower-price made-to-measure suits out of its new facility in Chile that will retail between $595 and $895. “We see tremendous potential there,” Blair said.

Clearly none of the latest made-to-measure offerings are sewn on Savile Row. My.Suit’s offerings are made at the company’s own factory in Mexico and Indochino’s are made in its Shanghai plant.

There are those who have their doubts. Entrepreneurs have been down this path before. Bright-eyed businessmen hook up with a Hong Kong tailor and a plan to deliver custom suits at a price, but underestimate the complexities of the business and fade out. More traditional, high-end tailors also bristle that their suits and those of the new retailers are both called “custom.”

“You’re getting inexpensive suits in inexpensive cloths,” said Joseph Wendt, owner of Joseph’s Custom Clothiers, which is about to open its first Manhattan store, where the bulk of the custom suits will retail for between $2,200 and $3,500 and are produced in New York State. “It’s for a younger guy who doesn’t want to spend a lot of money. But you won’t find a guy in a boardroom wearing a $500 suit made in Korea. You don’t get a Mercedes for the price of a Chevy.”

The struggle between traditional, luxury-level tailors and cheap-and-easy custom shops came to a head two years ago. Savile Row tailors lost their claim to the word “bespoke,” as meaning exclusively handmade, when the British Advertising Standards Agency ruled Sartoriani could use the term in its advertising.

And there are more consumers who can afford a Chevy than a Mercedes. My.Suit’s Madison Avenue store is expected to ring up more than $2 million this year, and Hancock said the plan is to open additional My.Suit stores, as well. The company is looking at Wall Street and the Rockefeller Center area of New York. “The five-year plan is to expand up the East Coast, but our dream is to eventually be a national player. Our factory is capable of making 1 million suits a year,” he said.

The new custom retailers also defended their products, arguing their factories can turn out high-quality goods that warrant the “custom” name.

“We do something really closer to bespoke than made-to-measure,” said Astor & Black’s Schottenstein. “Our tailors come to your office or home, measure you and then send [the information] to the factory where they make an individual pattern for you. We have young guys buying us, but we also see established men who are trading down because they like the value and quality we deliver.”

Besides, he said, true bespoke isn’t the modern way. “That requires multiple fittings and can take months,” he said. “Today, no one has the time or patience for that.”