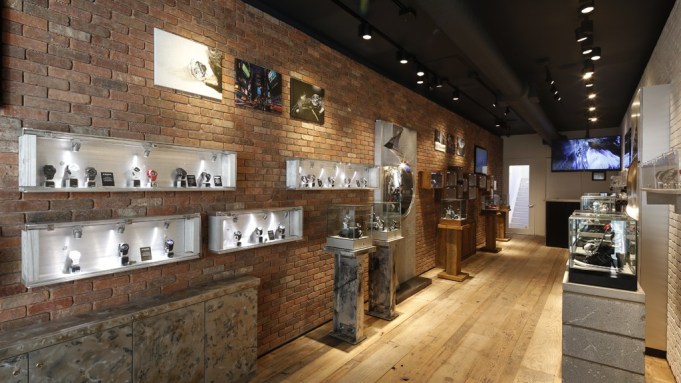 G-Shock is celebrating its 30th anniversary by opening its first freestanding store in the U.S.

The Casio-owned watch brand on Wednesday opened a 1,500-square-foot flagship at 454 West Broadway in the heart of New York’s SoHo district. The two-level store carries the full men’s and women’s collections as well as several limited-edition pieces, including commemorative items for the upcoming anniversary.

“SoHo is a fashion destination,” said Tadashi Shibuya, general manager of the timepiece division. “We have 300 stores around the world, but this is our first in the U.S. G-Shock is going to celebrate its 30th anniversary next May, so the timing is right.”

The store, with its streetwear-influenced design, is expected to appeal to its core customer: young men between 18 and 35 who are action sports enthusiasts. “G-Shock conveys toughness and this store has an industrial feeling,” Shibuya said, pointing to the cement blocks and metal I-beams used to hold display cases. “G-Shock is the toughest watch in the world; it’s unbreakable. The original concept is that you can drop it from 30 feet, it’s water-resistant and has a 10-year battery.”

The 800-square-foot first floor is devoted to selling space while the 700 square feet on the upper level is dedicated to a museum of the company’s watches over the years as well as a gallery space. “G-Shock supports up-and-coming artists,” he said, and has since its inception.

For the opening, the work of Brooklyn-based graffiti artist Eric Haze, who has collaborated with G-Shock since the late Nineties, is on display both in the gallery space as well as in a display case right inside the front door where Haze’s most recent watch and packaging designs are being showcased.

The second floor also features an elaborate G-Shock sculpture crafted from 1,200 watches that have been spray-painted gray as well as a company history video.

The majority of the watches retail for $130 to $150. The highest-priced offering in the store is a limited-edition titanium diving watch created for the anniversary that is priced at $1,700. The company’s best-selling model is the Mudman, which retails for $200 and features a compass, thermo sensor and moon phase graph. Nearly 40 percent of the brand’s sales are solar-powered watches, he said.

Although the majority of the offering is men’s, Baby-G, the company’s women’s collection, is also featured in the store.

Shibuya said there are no immediate plans to add other stores in the U.S., where the brand is carried in 1,000 department stores and about 2,000 jewelry stores. But that doesn’t mean he isn’t looking for other locations.

“We want to see how the customer responds,” he said. “We hope everyone will come to see what G-Shock is about. [Then if it’s successful] why not?” He said the first choice for a second location would be the Los Angeles area. “That’s a big, big market for us.”