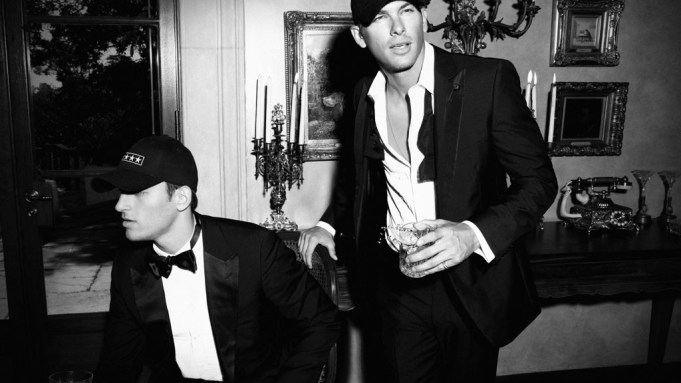 Former fashion publicist and talent agent Josh Reed is kicking off Gents, his new headwear and basics brand, with a splashy advertising campaign. Reed is investing $1 million to $2 million in a print campaign to draw attention to the new company, which is launching with a line of upscale, customizable baseball hats.

The black-and-white ads, shot by Yu Tsai, feature models Chad White, Adam Senn and Kevin Sampaio, along with newcomer Melissa Bolona. The initial advertising buy includes eight pages in the winter issue of VMan and spreads or single pages in the December issues of GQ, Details, Men’s Health, Nylon for Guys, Out and Playboy. Additional buys are planned for next year.

Reed’s pricy bet on advertising to springboard Gents into the fashion landscape was influenced by his time as director of men’s public relations at Calvin Klein Inc. from 2006 to 2010. “I want to explain the brand though imagery and really set the tone for future categories,” said Reed, who was most recently director of public relations at Gilt Man and a commercial talent agent at Todd Shemarya Artists Inc.

Los Angeles-based Gents launched in October with an e-commerce site at Gentsco.com, where shoppers can order 24 designs — such as a star, fleur-de-lis, Maltese cross or crown — on eight colorways in two sizes of fitted baseball caps for $59. A custom monogram can be added for $69.

“I moved out to L.A. to work as a talent agent and saw that guys were always wearing caps, even at places like Chateau Marmont and on the red carpet. But it’s hard to find anything without a flat brim or sports team on it,” said Reed. “I wanted to juxtapose the sporty with the sophisticated. Caps are something that’s masculine and athletic but missing from high-end fashion brands.”

Helping finance the start-up — and the advertising buy — are two silent investors that Reed declined to identify. The company has five employees and worked with consultant John Auerbach, the former president of Gilt Groupe’s Park & Bond site, on the launch.

“I think there’s a hole in the market in the better headwear space and his idea for online customization is a trend that’s only getting stronger,” said Auerbach. “Josh’s idea is to enter a number of niche categories that are quite specific and that nobody really owns right now and offer a range of well-designed essentials.”

Reed plans to add upscale, raglan-style T-shirts to the site this month, as well as knit beanies, like those favored by Ashton Kutcher and David Beckham, in cashmere and wool blends. Down the road, he envisions growing into gym bags, travel bags, dopp kits and accessories like dog tags. “David Yurman makes amazing dog tags but these will be a lower price point. I’m not competing with luxury brands. This is attainable luxury,” he explained.