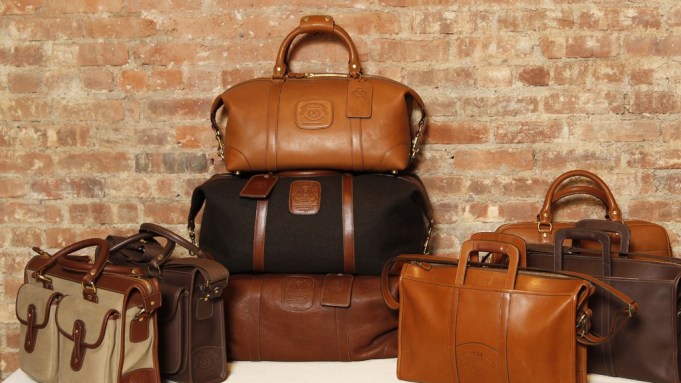 NEW YORK — Ghurka has experienced a lot of ups and downs in its 37-year history, but under the management of its new owners, the leather goods company is planning a major relaunch for fall.

This includes a new store in SoHo here, a new e-commerce site, a new advertising campaign, a series of collaborations and a wholesale growth strategy.

“I bought a Ghurka daytimer in the mid-Eighties when I graduated from high school,” Reuter said, sitting in the firm’s SoHo offices. He became a fan for life. “I couldn’t understand why it didn’t go further. What appealed to me was the whole warrior aspect of the brand. We all want to feel like warriors.”

Ghurka was founded in 1975 by Marley Hodgson, who had created Trafalgar, and the name derives from the hand-crafted leather goods created for the Ghurka soldiers of Nepal, who are renowned for their bravery.

“I decided I wanted to buy a luxury or aspirational brand,” Reuter said, “and one of the first ones I looked at was Ghurka. We came to an agreement and made the deal.”

Since that time, Reuter and his team have worked to take the product back to its roots as an aspirational luxury label. The product line, which centers around luggage, small leather goods and accessories, is manufactured in the company’s factory in Norwalk, Conn. Prices include $1,395 for the Express No. 2 travel bag in chestnut leather, one of the company’s iconic pieces, and $995 for the Cavalier. A satchel in khaki twill is $795, a weathered messenger bag is $395, and a classic wallet retails for $195.

Under ANG, Ghurka’s distribution was limited and wholesale volume was about $1.5 million, said Reuter, who is expecting that figure to double this year.

“We’re just getting rolling,” he said. “Ghurka has such strong DNA and the perfect foundation to build on.” He cited a brand awareness study conducted by the company that found Ghurka had 25 percent aided awareness. Coach has 96 percent, Cole Haan 81 percent and Tod’s 43 percent. “That told me there was latent awareness for the brand and if we can awaken it, we can really do something with it. There’s a huge tailwind for a relaunch.”

The acquisition was an asset purchase, he said, meaning Brightwork wound up with “a pile of legal papers and a trademark.” The first order of business was to create a business plan to “fix what was broken,” then add product, expand distribution and create a marketing platform. When the brand changed hands, he said, it was carried in only 18 stores, a number that will rise to 40 by the fourth quarter and that includes Bergdorf Goodman, Nordstrom, the Mitchells Family of Stores and Park & Bond in the U.S. as well as Beams in Tokyo.

“From Q1 through Q3, we were just getting ready, but this fall is when it all comes together,” Reuter said.

Pam Bristow, vice president of brand communication, said the company’s new Web site made its debut on Wednesday after eight months and is designed to not only sell product, but create an “in-depth brand experience.” On Tuesday, Park & Bond will offer an assortment of Ghurka products including a special grouping of two styles produced exclusively for the Web site: a Cavalier 2 bag in navy twill and leather with a matching dopp kit.

In September, the company will introduce the first product in its “specialist series,” she said, which is based on the company’s tradition of offering use-specific bags for business and recreational pursuits. The first will be a chef’s bag and knife roll for Daniel Humm of Eleven Madison Park and NoMad that will be available for holiday. Ghurka is also producing the restaurant’s wine list covers, place mats, coasters, check folios and other leather accessories.

The company also has a collaboration with McLaren Racing for select leather accessories, including leather manual pouches, and a selection of gift items, including custom travel trays in McLaren’s signature orange. Bristow said there are a “couple more” collaborations in the works, including a camera bag.

In October, Ghurka will open a 1,000-square-foot store in a former antiques shop at 65 Prince Street here, which Bristow said will be “a real brand statement.” The company also operates a store at 781 Fifth Avenue in the Sherry-Netherland hotel. The SoHo unit is being viewed as the flagship and Reuter has purchased elaborate turn-of-the-century Art Nouveau casework from a former bakery shop to anchor the space. “The Ghurka soldiers reached their height of notoriety in World War I,” Bristow said, “and we wanted to activate some of that heritage in the SoHo store.”

To communicate its positioning to consumers, Ghurka will launch a print ad campaign inspired by its woodcut product directories of the Seventies and illustrated by Steven Noble, who created the back of the $1 bill for the Federal Reserve. These black-and-white ads will run in the New York Times, The New Yorker and New York Magazine starting Aug. 30. There is also a color-image campaign shot by Thomas Lagrange that will break in September magazines including Esquire.

Looking ahead, the company hopes to expand into women’s and also wants to “experiment with opening price point items to open the brand to the next generation of consumers,” Bristow said. The first of these include a canvas grouping the prices for which have not yet been set.