GlobalTex made its debut at the Los Angeles Convention Center last week in the shadows of a challenging economy. 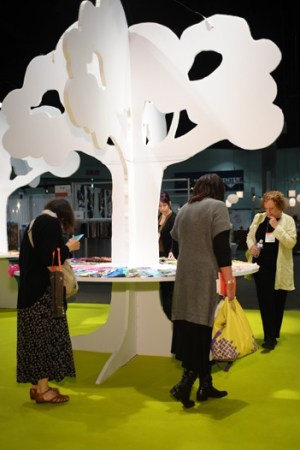 LOS ANGELES — GlobalTex made its debut at the Los Angeles Convention Center last week in the shadows of a challenging economy and a competing textile expo held just two weeks earlier.

For the three-day show, which ended April 30, GlobalTex’s organizers said they counted more than 2,200 attendees visiting about 125 booths. In addition to emerging designers such as Juan Carlos Obando, Katy Rodriguez and Maxine Dillon, representatives from established manufacturers including Karen Kane, Leon Max, Jem Sportswear, Kangol and Jerry Leigh came in search of fabrics for the spring-summer 2010 season.

Exhibitors said traffic seemed a bit light at the show, a trend some attributed to the fact that the Los Angeles International Textile Show at the California Market Center had finished two weeks earlier. Italy’s Almodo Mills complained there were too many shows, while France’s Solstiss Bucol, which participated in both GlobalTex and the CMC’s event, said GlobalTex turned out to be productive because it lured prominent fashion brands such as BCBG and Bebe.

The trade fair also drew 18 vendors from Vietnam, Los Angeles-based American Apparel Inc., which made its first appearance at a textile-centric event, and European mills such as France’s Philea, which had never exhibited in a local show before.

Market Center Management Co., the Dallas-based organizer of GlobalTex, was pleased with the outcome.

Some foreign exhibitors were unable to obtain visas to come to the U.S. and participate in the show. With its focus on international mills, on top of an ambitious plan to triple the number of exhibitors for the next show, GlobalTex said it will continue to work with government authorities and start the visa application process as early as possible to ensure exhibitors will come to the sophomore effort to be held from Oct. 13 to 15.

Several designers approved of GlobalTex’s format, which featured booths congregated at a central, open location rather than being split among different floors and separate building wings.

“It’s set up a little easier,” said Dillon, who shopped for voile, grosgrain and piped trim.

Vendors went high-tech and high-end with metallic finishes. Solstiss Bucol wove metallic thread into lace designed in floral patterns and geometric shapes that evoked the shimmering background of Gustav Klimt’s painting “The Kiss.” Almodo Mills applied a mirror finish on a cobweblike stretchy nylon lace costing around $4 a yard. France’s Philea integrated polyamide metal into purple linen priced at $9 a yard, and Reynaud Rexo, also from France, offered a stretch metal cloth printed with what resembled watercolor clouds for $20 a yard. Los Angeles-based Protrim Enterprises targeted denim designers with a 7-millimeter metallic thread that doubles in size after washing. Protrim president Gokhan Erkovan rationalized the $40 price for 1,000 meters of the polyester-based filament by explaining “you don’t need to change your machines, bobbins or anything.”

At Shara-Tex’s booth, which seemed to glow with swatches dyed orange, yellow and neon green, sales manager Bob Allen said the Eighties-inspired tints persisted from past seasons, although economic concerns weighed heavily on buyers’ decisions. “It’s all price-driven,” he said.

Noriko Sezaki, designer for design development company New Power Generation in Los Angeles, said she targeted an average price of $4 to $5 a yard for plaid and striped fabric to transform into men’s shirts.

Hilda Marquez aimed to stick to a budget under $10 a yard for silk and cotton to use in the launch of a new fashion company called Chiave LLC, backed by socialite Suzanne Saperstein.

“Anything that looks hand-painted is catching the eye right now,” Marquez said.

Organic materials also appealed to designers. American Apparel added new colors such as pomegranate and purple to its organic cotton collection of finished jersey T-shirts and hoodies on which designers can screen-print their own designs. Unitex International, from Vernon, Calif., said its eco-friendly array of organic cotton, recycled polyester and hemp outperformed its portfolio of burnouts, foil and Supima-Modal blends.