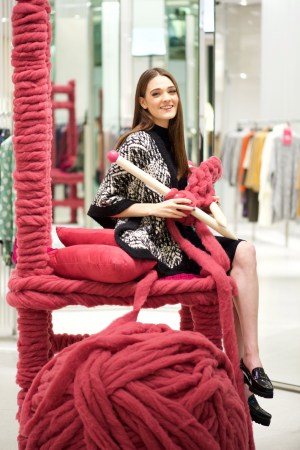 TORONTO — As Hollywood stars bid farewell this past weekend to the Toronto International Film Festival, Holt Renfrew and the upscale brand Line Knitwear turned the spotlight onto Canadian Wool Week.

Back for its second year, Holt’s flagship here mounted a live, in-store animation over the weekend where onlookers watched knitting circles, wool spinning, yarn bombing and other displays performed by local artisans, all using raw wool dyed in the luxury retailer’s signature shade of magenta.

An air of fantasy also permeated the event, which included an Alice in Wonderland-like figure sitting demurely on the store’s second floor, knitting in a chair covered in wool made by local craftsmen, while spinners worked elsewhere in the building “like Rumpelstiltskin,” said John Muscat, president and cofounder of Line.

“Our goal with Wool Week is to get a conversation going,” Muscat said.

“Wool Week was born out of a global endeavor launched by Prince Charles to bring more awareness to the industry and to help consumers appreciate wool’s unique, natural and sustainable benefits,” he said. “In Canada we do three million pounds of wool a year. Ninety percent of that wool is exported, while 10 percent is sold in Canada to local knit shops.”

Canada’s colder climate helps to produce wool with a higher elastic value. That, in turn, gives more durability to clothing — and a distinctive and marketable edge to Canadian wool manufacturers over their competitors, Muscat contended.

“Today, countries buy Canadian wool and spin it with their own product to give garments more wearability over a longer period of time. Yet the amount of wool Canada produces is a fraction of the global consumption,” said Muscat.

The evolution within the wool industry is one that falls in line with Holt’s own H Project, which searches out innovative global artisans and lends them support.

“The Prince of Wales’ vision for The Campaign for Wool…embodies so much of what Holt Renfrew’s H Project is all about,” said Alexandra Weston, the retailer’s director of brand and creative strategy. “We are proud to be part of this initiative helping to support and grow the local wool industry from farmers to artisans for a second year.”