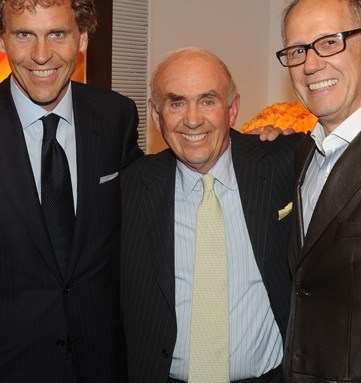 A sizable cross-section of the men’s wear industry convened Thursday evening at a memorial service for Stan Gellers, the former DNR senior editor and columnist who died in March at the age of 84.

Held inside the rooftop theater at the Lord & Taylor Fifth Avenue flagship in Manhattan, the standing-room-only crowd paid tribute to Gellers’ 52 years at the men’s wear title and his enduring passion for his craft.

“The industry has lost the last of an old breed,” said Ronnie Wurtzburger, president of Peerless Clothing. “Somehow he knows we’re all here and there’s a column he’ll write about it.”

Apart from his enthusiastic and unflagging devotion to journalism — Gellers was known for his witty, conversational writing style, encyclopedic knowledge of the tailored clothing business, and the occasional nudging of his interviewees towards his own point of view, as several speakers recalled to laughter — he was also recognized as an industry mensch who often helped people find jobs or deal with health problems.

“He was a career counselor who had his own agency going. If somebody lost a job, the first person you called was Stan Gellers,” said Wurtzburger. “We’re talking about someone who was a special human being.”

Wurtzburger was one of four speakers at the service, including Richard Cohen, president of Robert Talbott; Marty Staff, ceo of JA Apparel, and Edward Nardoza, editor in chief of WWD and former editor of DNR.

“Stan was the grease that kept the men’s wear industry going,” noted Staff, who spoke with Gellers on a daily basis. “I think many people in this room got to know each other and like each other — or not — through Stan.”

Among Gellers’ traits recalled with fondness by Staff and others was his long-standing attachment to free lunches with sources — where he often gleaned scoops — his movie-star looks in his youth, and his gruffness with both waiters and chief executives in his later years.

“I first met Stan in 1976. I was right off the boat and running Burberry’s wholesale business. ‘Did your father get you the job?’ First words Stan ever said to me,” remembered Cohen.

Cohen called Gellers a legend, comparing him to the venerable DNR columnist Clara Hancox, also a five-decade veteran of the title, who died in 2006. “A legend is someone you talk about, not somebody who talks about themselves,” he explained. “It wasn’t about Stan; it was about you. ‘Speak up, Richard, what did you say? Oh, that’s genius.’ Sure, until I read it the next day and my colleagues would say, ‘Why did you tell him all that?’”