Dress shirt makers are reaping the benefits of a multitude of new styles, driven by slim fits, spread collars, fashionable plaids and a lot of color. 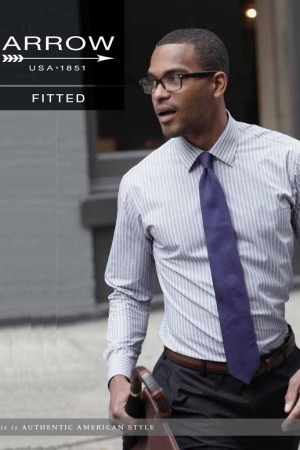 ATLANTA — Dress shirt makers are reaping the benefits of a multitude of new styles, driven by slim fits, spread collars, fashionable plaids and checks, and a lot of color.

“Dress shirts are one of the key drivers in men’s wear,” said Mitchell Lechner, president of the Dress Furnishings Group of Phillips-Van Heusen Corp. “But what’s not selling is product that lacks value and newness and does not engage the consumer.”

The new, fashionable dress shirt is on the edge of casual. While solid whites and blues are still a mainstay, men — especially younger men — are turning to this more modern version that’s offered in small checks (especially ginghams), plaids, tattersalls, or, to some extent, stripes. Colors include navy and lighter blues, taupes and jewel tones.

Jim Heiser, president of Individualized Shirts, said top colors include lime, purple and navy, while top fabrics include oxfords, khaki twills and rustic and heritage chambrays. “The younger demographic [26 to 38] wants a product that has heft to it,” he said.

Plaids, checks and stripes all do well, as well as dobbies and tattersall on pinpoint oxford, Heiser continued. The fashion customer wants a spread collar with a slim fit, which has become a “tremendous amount of our business.” That’s a reversal from five years ago when most silhouettes were fuller.

The club round button-down does well from a casual standpoint, Heiser said.

Alex Field, head of marketing, Thomas Pink, said to expect original patterns and bold new colors with an emphasis on oranges, yellows, blues and neutrals. Also, diverse fabric textures will be important. “Seersucker shirt fabrics and slubby linens, along with oxford and chambray fabrics, will have a strong presence,” he said. “Checks of all colors and sizes have been exceedingly popular this season, from Prince of Wales to puppy tooth and from gingham to tartan and tattersall.”

While the big trend in collars is the spread, extreme cutaways, penny (or club) and button-down collars are important, too. These shirts are very sharp worn with knit, wool or skinny ties. Field said the extreme cutaway collar is a rising trend, though the semicutaway remains Thomas Pink’s most popular style. The shirtmaker will increase exclusive style offerings for spring in both its Slim Fit and Super Slim Fit models.

Dress shirts are selling across various income levels. According to Lechner, PVH dress shirt brands are doing well across all distribution channels, from Wal-Mart to Neiman Marcus. “There’s consistency in all channels of distribution,” he said, attributing success to newness. “We just added a slim fit that’s doing fabulous in Wal-Mart. [Consumers] are going to be inspired by anything that’s new.”

While some manufacturers are pulling back on details because of inflationary costs, Lechner said, PVH added value to its product, from fabric to details to model, in every distribution channel, which is paying off for the company. “Customers saw the additional value,” said Lechner. As a result, sales and average unit retail have increased.

Heiser said his company is running double-digit increases in sales this year over 2010, which also had double-digit increases. The international business has experienced tremendous growth because of product newness and the company’s made-in-USA status, he said, but also the Northeast, Southeast and Midwest regions in the U.S. are doing well.

Sales are strong at Ben Sherman, too, both wholesale and retail, because of newness, particularly the Plectrum brand that was introduced just this fall. The company also is expanding its shirt bar concept with “shirteliers” into more stores and taking it to key accounts. “It’s a delicatessen of shirts,” said Ward-Rees. “Customers can get advice on what to wear. It’s important to us because it’s our heritage, but it’s also good for customers.”

The more casual dress shirt is “the big driver in the men’s market, and manufacturers have done a good job of making dress shirts a little more sporty,” said Marshal Cohen, chief retail analyst, The NPD Group. “It’s a multifunction that consumers want these days.”

While retail sales figures from NPD Group show dollar volume relatively flat from 2009 through August 2011, Cohen said business is beginning to improve. “Coming out of the recession, it’s been a slow, steady comeback, but you’re seeing something unusual in that men’s is outpacing women’s,” he said. “It’s a ‘need’ cycle.”

Not only are men beginning to shop for clothes again after a two- to two-and-a-half year hiatus, they’re also dressing up more, he explained. “They want to keep the job they have or they getting a new job, and they want to dress the part. It’s a lifestyle shift that men [both young and older] are investing in their wardrobes again and dressing for success.”

Glen Taylor, partner in the Taylor, Richards & Conger store in Charlotte, N.C., said businessmen are replenishing their shirts, but start with made-to-measure in blue and white solids. However, the direction of the retailer’s off-the-rack business is the sporty checks. Collars are mostly spreads, but the store also does well with penny and cutaway collars with the younger customer. Older customers are buying “pared-down” silhouettes, while younger ones are buying slimmer fits.

Manufacturers are positive about spring. Said Heiser, “I see exciting things happening in America but also internationally” for Individualized Shirts. Ward-Rees said sales are “definitely good,” and points to the new colors and fabrics that will enhance spring sales.

According to Lechner, “Most retailers are planning dress shirts up for 2012 based on the success that we are experiencing this year. Continued success will only come by continually inspiring and engaging the consumer with newness.”