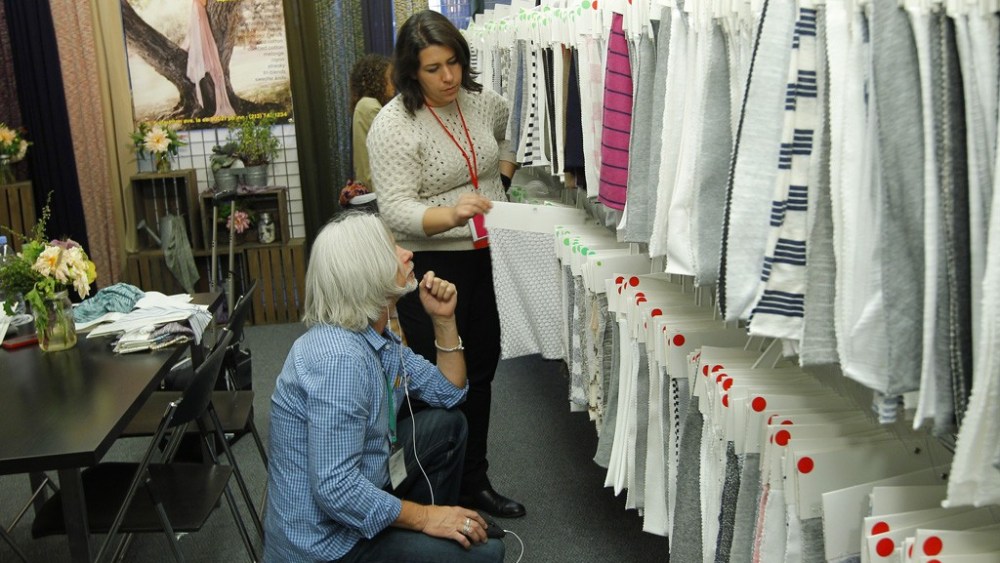 LOS ANGELES — Innovation and novelty helped drive business at the Los Angeles International Textile Show, where vendors and attendees continued to contend with the issue of balancing price, delivery and quality.

At the three-day show that ended Wednesday at the California Market Center here, more than 250 exhibitors from France, Italy, Korea, India, the U.S. and other countries presented not only their newest offerings for fall 2013, but also stock for spring to appeal to designers who prefer to order fabrics and manufacture clothing as late as possible. No matter which season was targeted, designers were keen on finding novel and innovative textiles. Sometimes price wasn’t a concern if the product exceeded expectations.

Many attendees were drawn to a pressed wool fashioned from recycled wool, alpaca and nylon that were dyed in brown ombré. Made by Italy’s Euromaglia, the pressed wool cost $29 a meter. Even more expensive but just as popular was sequined fabric from India’s Sofiatex that changed color in the light; it cost $68 a yard before duties and shipping fees. New York’s Ermani Group garnered interest for wool bouclé whose prices started at $20 a yard. Novelty was also a selling point in trims such as studs, embellished Peter Pan collars and animal prints from Canada’s Pacific Imports, which charged 35 cents to $30 a piece.

Technology helped ChungWoo Textile Co. from Korea pull off a debut as one of the 14 booths in the Korea Pavilion. Already working with clients such as BCBG Max Azria and Forever 21, ChungWoo highlighted its pre bio-washed spandex that is soft to the touch and can be dyed in any color. Priced between $3 and $4 a yard, the material requires a minimum of 1,000 yards.

JH Textile Inc., also from Korea, attracted customers with its fake fur that emulated ermine and other lavish skins at a cost of $5 to $12 a yard. The most popular styles epitomized texture and novelty, such as bonded fabrics and rounded welts on white fur. Even as designers expressed that price was a primary concern, JH president Kerry Gil said it’s impossible to lower prices without compromising quality. “We use special yarn,” he said. “The piling is 6 millimeters to 15 millimeters.”

In addition to the Korea Pavilion, the trade expo hosted 28 booths as part of the Lenzing-sponsored group, 24 booths in the European section and 13 L.A.-based mills. The bulk of the attendees represented the local industry’s strength in high-end and contemporary design, including Kevan Hall, Erik Hart, Jasmin Shokrian and Britain’s Jigsaw, which has started to make some clothes in L.A.

Acknowledging that textile and apparel manufacturing often go hand in hand, show organizers are trying to expand the textile venue into a sourcing fair. Bharat Silks did double duty for its premiere at the show by selling its digital prints and novelty jacquards for $9 to $20 a yard and promoting its full-package manufacturing facility in India that charges $15 and higher to produce each garment.

Growing interest in U.S. production has created buzz for local textile mills. Yet even with the attention, the last remaining domestic manufacturers must constantly evolve and innovate. Design Knit Inc., which has been manufacturing knits in L.A. for 28 years, piled on novel details, including Lurex stripes on linen-cotton slub and chevron patterns on plissé, twill and jacquard, for its fabrics that sell for between $2.50 and $20 a yard. It also promoted knits that customers can mix and match for cut-and-sew sweaters.

“People want the versatility,” said Pat Tabassi, Design Knit’s product development and marketing manager, adding that the company is also compiling a list of local cut-and-sew factories to recommend to customers who want to make clothes in L.A.

Unitex, a knitting mill based in Vernon, Calif., believes the economy must improve before it sees a surge in production. Because it makes everything outside of L.A., its production schedule runs between three and four weeks with a 1,000-yard minimum. Top sellers at the show defined texture and novelty, such as jacquard knitted in geometric patterns and double-face stripes.

“Once we get some stability with the economy, you’ll definitely see more Made in USA [products],” said Michael Tanios, Unitex’s manager of production and fabric development. “It could be next year. It could be affected by the [U.S. presidential] election.”

For designers, maintaining a competitive edge while staying innovative with fabrics and designs is a top concern. Jodi Benavidez, designer of a Costa Mesa, Calif.-based women’s contemporary loungewear line called Brokedown that is carried by Saks Fifth Avenue and specialty stores, juggled an eye for fast-changing trends with a budget limited to less than $20 a yard as she shopped the textile expo.

“The biggest challenge is staying ahead of the game without having mass marketers knock you off,” she said.