The 23rd edition of Intertextile Shanghai Apparel Fabrics ran from Oct. 11 to 13 in conjunction with the start of Shanghai Fashion Week. 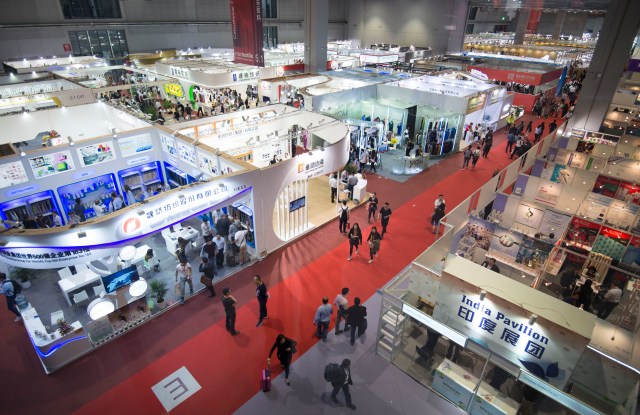 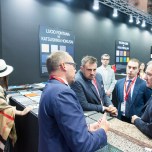 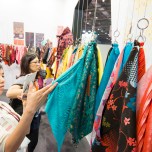 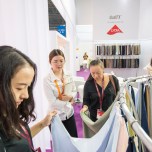 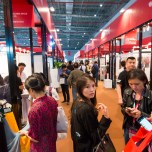 SHANGHAI — One of the largest sourcing fairs for apparel fabrics returned to Shanghai last week offering visitors an array of production and material options amid some positive signs for China’s beleaguered manufacturing sector.

The 23rd edition of Intertextile Shanghai Apparel Fabrics, which ran from Oct. 11 to 13 in conjunction with the start of Shanghai Fashion Week, remained popular with exhibitors and visitors, with a more upbeat economic outlook in China predicted for the second half of the year buoying the mood after several years of transition and uncertainty.

On the back of stronger factory surveys in recent months, ING’s chief Asia economist Tim Condon last week wrote in a note that the forecast for second-half gross domestic product for China was increased to 6.8 percent from 6.5 percent and the full-year growth forecast to 6.7 percent from 6.6 percent.

Riding a wave of change in China, as wage hikes cause low-cost manufacturing to migrate to Southeast Asia, Bangladesh and even East Africa, China’s textile industry has sought out market niches in which to thrive, as well as introducing a new era of flexibility in its arrangements with buyers in order to attract newer and often higher-end customers.

“In total I think the global textile industry is still in very good shape and the Chinese textile industry is very strong, and you can see that from the participation in this show,” said Olaf Schmidt, vice president of textile and textile technologies for fair organizer Messe Frankfurt. “Of course, especially in garment production, we have seen an increase in wages, which has prompted some companies to look for more sourcing platforms internationally. But I think in total China is still the largest place. You can’t find anywhere else in the world that can absorb the entire production.”

But according to Wendy Wen, director at Messe Frankfurt (HK) Ltd., it’s not just the number of visitors that have proven a positive for exhibitors. An increase in visitor quality in recent years is also having a positive impact.

Of the country pavilions, Wen pointed to the Japanese and Korean pavilions as particularly popular, with feedback from exhibitors that they were keen to keep coming back to reengage with a largely domestic buyer base at the fair.

Visitors to the Japanese and Korean pavilions reported being attracted particularly the technical innovations, being offered at reasonable prices and at reasonable terms, with some Japanese companies offering minimum orders of only one meter.

Maryanne Andriessen was a first-time visitor to the show, looking to source cotton, linen and viscose for her Australian luxury sleepwear brand, Hit the Hay.

“Before coming to China, I was told a lot about Vietnam and Thailand as a great place to go for organic and sustainable fabrics, but I was surprised at Intertextile at what was available here in China,” she said. “Also how much the suppliers here are able to fit the needs of a small label, like mine, looking for smaller minimums.”

Also growing, albeit from a lower base, was interest from domestic buyers in high-end product that offered something out of the ordinary.

Solstiss, a high-end French lace and embroidery company with 100 years of history and a luxury client roster including Chanel, is one of the beneficiaries of this appetite for quality and special offerings.

“The Chinese buyers we are seeing are looking for quality, there’s no doubt…. It’s still not huge, but we hope it will continue to grow in the future,” said Marc Barbisan, export sales manager for Solstiss.

According to fair organizers, as the apparel industry becomes more focused on niche sectors, the feature zones of Intertextile Shanghai become more vital, as they allow visitors to more easily access the specific materials they are looking for.

This edition saw feature zones including Accessory Vision, Beyond Denim, Premium Wool Zone, Verve for Design, Functional Lab and All About Sustainability.

Bower Roebuck managing director Ronald Hall, an exhibitor in the Premium Wool Zone, hoped its British pedigree would strike a chord with Chinese buyers on the lookout for authenticity and brand story when sourcing materials.

“We see the potential for a company that has a ‘British signature’ that goes beyond its perceived image in terms of quality and design to reach a much wider and sophisticated Chinese base,” he said. “The Chinese market is more demanding and knowledgeable in terms of fabrics and fabric uses, and is continually looking for new things.”