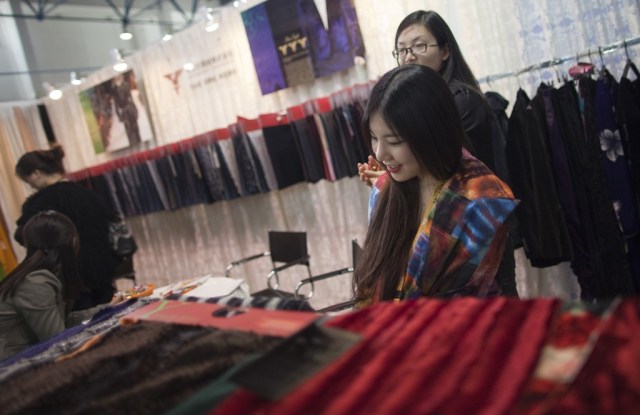 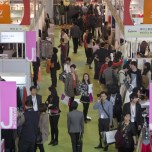 BEIJING — Looking like an overstuffed closet full of buttons, lace and swatches of skin-soft cotton, Beijing’s Intertextile Apparel Fabrics show marked another year of growth and not much space left to expand inside the convention center’s 538,000 square feet.

This year’s fair, which ended its three-day run March 30, drew an estimated 26,000 visitors, said Wendy Wen, director of trade fairs for Messe Frankfurt, organizer of the show. A head count of 14,000 visitors on the show’s first day, most of them Chinese buyers, marked a jump of 2,000 over last year, she said. There were more than 1,300 exhibitors from 16 countries and regions, a 22 percent increase from last year, with 11 from Japan, 59 from South Korea, 28 from Taiwan, and a new hall devoted to Milano Unica as part of this year’s expansion. Much of the show’s growth came from international exhibitors, organizers said.

Buyers “want more mature brands and are more interested in European companies, especially from Italy,” Wen said. “They are really doing business” at the 2012 fair, she added. Exhibitors told her they prefer Beijing to other venues because “in Beijing they can meet high-end buyers who have more purchasing power,” she said.

The Milano Unica pavilion brought together 95 Italian exhibitors featuring their spring 2013 collections, along with a business zone for private negotiations, a lounge area and a trend section. The emphasis on European fabrics is a direct response to demand from Chinese buyers, said a Messe Frankfurt spokeswoman.

“They know such brands, but they come to the fair because they don’t know how to find them,” she said.

One example is this year’s new Portugal pavilion, put together by Associacao Selectiva Moda, which promotes Portuguese textiles and fashion on an international scale. Chinese companies seek out Portuguese textiles because they “want to add value with fabrics and accessories,” said Sofia Botelho, executive director of Associacao Selectiva Moda. Since the Chinese already know how to manufacture clothes, they can turn to Portugese textile markets for “design, quality and a lot of new compositions,” she said. The new pavilion featured five companies: Arco Texteis, Lemar, Riopele, Somelos and Troficolor.

Riopele, which mainly serves the women’s wear market and works with American designers, sold fabric to a Chinese company for the first time, said Botelho, adding that she’s seen some real changes in the Chinese market since 2001, when she first started attending the Intertextile shows in China.

Chinese buyers were timid then, but “now, they are looking for brands like Chanel. If they see something in Vogue, and they’re rich, they can go to the U.S. or Europe to buy.” Those who don’t have the opportunity to travel will shop for luxury goods in China, she said, and that’s the market many companies are eyeing.

The same goes for S.I.C. Tess, the Masate, Italy-based fabric company. Nadia Schincardi, a spokeswoman for the company, said China is already an important market, but now buyers are increasingly focusing on quantity and the higher quality of the market.

In America and Europe, Schincardi said, buyers and designers are focused on margins and they are more hesitant to invest in 300-count Egyptian cotton for their shirts. But S.I.C.’s philosophy is to keep the best yarn count, use only Egyptian cotton and buy the best raw material, she said, adding that “it’s obviously more expensive,” but the Chinese understand that. The concern is whether S.I.C. can meet the demand for the enormous Chinese market. Right now, “We don’t make enough to produce enough for China. By the middle of the season, we’re done” with the 300-count cotton, she said. “If that is the best, they want the best.”

Umut Carboga, international sales manager for Ozlem Fabric, a wool textile maker based in Istanbul, said although last year was his company’s first time at Intertextile, the demand from China is “increasing year by year.”