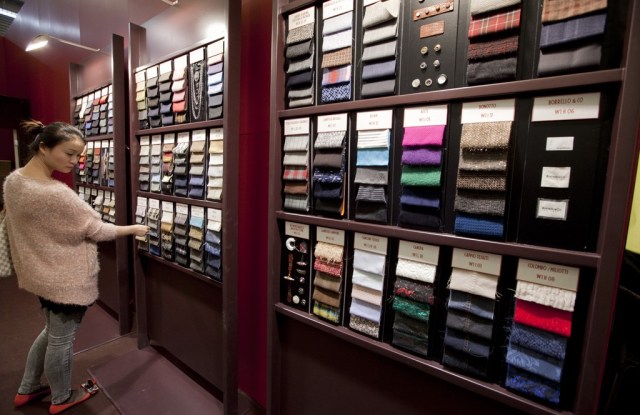 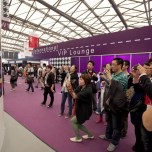 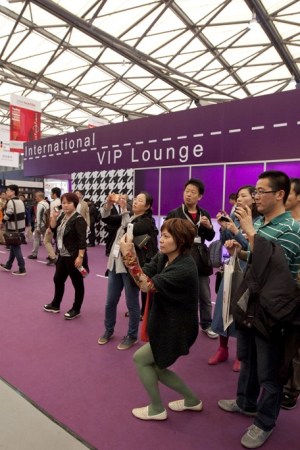 Visitors at the Intertextile Shanghai Apparel Fabrics in Shanghai.

SHANGHAI — The continued slow economies in Europe and the U.S., and a gradual shift of sourcing away from China, were apparent at the Intertextile Apparel Fabrics Fall 2013 show.

Chinese exhibitors and those who traveled here from Europe and elsewhere in Asia for the annual event, held Oct. 22 to 25, said that, while the fair was busy, there seemed to be a loss of momentum as apparently fewer Westerners attended.

Intertextile organizers did not respond to requests for attendance figures, but observers said some exhibitors reduced their booth size this year because of weak economies in the West.

The lack of international visitors was most apparent in sections designated for Chinese apparel makers, where scores of textile manufacturers reported slow business.

“This year, in terms of the people who are attending, it seems like less than last year,” said Shi Changjiang, a sales associate with HTT Material Technology Co., a manufacturer based in Fujian Province specializing in fabrics for sportswear. “Most of the foreigners coming are already our customers. Last year, there were lots of new faces from abroad.”

Business in the U.S. for HTT Material Technology, which makes apparel for companies including Columbia Sportswear and Nautica, is stable, while sales to Europe have been slightly more volatile. Shi said orders have sharply declined in the domestic market, where a number of Chinese sportswear brands, such as Li Ning and Anta, have experienced dramatic declines in profitability due to fierce competition from foreign players and changing consumer tastes in the sportswear category.

“We were shocked by the decrease” in the Chinese market, Shi said. “The domestic market has been the most up and down.”

He added that the manufacturer is finding it harder to maintain margins due to rising raw material and labor costs combined with clientele who are unwilling to pay higher prices for fabrics. He said sales are down 20 percent this year.

The situation was even bleaker for Bosun Textile & Garments Co. Ltd., a maker of men’s suiting fabrics in Zhejiang Province near Shanghai.

“Some of our [foreign] customers have gone out of business,” said Allen Zhang, a Bosun manager. “It is very bad. Customers are very careful with placing orders because actually they are not so sure how the market will be. It is very hard to guess.”

The manager said profits are down 20 percent this year, and there is continued concern in the industry that if the Chinese yuan appreciates further against the dollar, margins will become even thinner.

Zhang said the company is focusing on expansion in the Chinese market to try to offset any further declines in its export business.

“The Chinese market is still very good,” he said. “It is a very big market and there is a lot of potential. Chinese still have money to spend.”

If anything, the Shanghai Intertextile show served as a weather vane for where domestic brands are betting Chinese will spend money on apparel. In an exhibition hall with Chinese denim manufacturers there was more of a bustle, but mostly with local buyers sourcing for Chinese retailers. According to Vincent Qin, general manager for marketing and sales with Prosperity Textile Ltd., a denim maker for a number of foreign brands, including Levi’s and Zara, Chinese stores are increasingly looking to launch their own denim lines to compete with international players in the market.

Qin said 50 percent of the Guangzhou-based Prosperity’s business now comes from China. Europe makes up around 30 percent and America around 20 percent.

“The U.S. market is dropping because of pricing issues,” he said. “Their target price is far away from our costs. India and Pakistan, their price is more competitive.”

Pier Luigi Loro Piana, chief executive officer of the Italian luxury brand and high-end fabric maker Loro Piana, said demand in China for expensive materials is continuing to grow and that, even with a slowing domestic economy, Chinese brands are willing to pay a premium for European luxury fabrics.

“It is quite an important market for us,” said the executive, adding that he expects China to become around 30 percent of the company’s export business. “The high-end segment of the market is growing faster than the lower level. I see a good potential in the future to supply more and more sophisticated, high-quality fabric [in China].”

Loro Piana said while he is concerned that a decline in exports to the West might hurt the Chinese economy in the short term, he feels like the country can weather any external economic storms by boosting domestic consumption.

“People are saying they don’t see any deep risk of a recession or decline in demand, particularly in the high-quality segment,” he said. “I am positive about next year. I think it will not be booming, but there will be steady growth that will continue.”

Loro Piana had a small exhibition in a special Milano Unica exhibition within Intertextile. The Italian trade fair created its own platform inside the show in an attempt to form a more unified front of Italian textile makers to market themselves to the Chinese.

“In China, there are lots of high-quality brands,” said Jeff Luo, a general manager with Amann. “They want the high-quality stuff.”