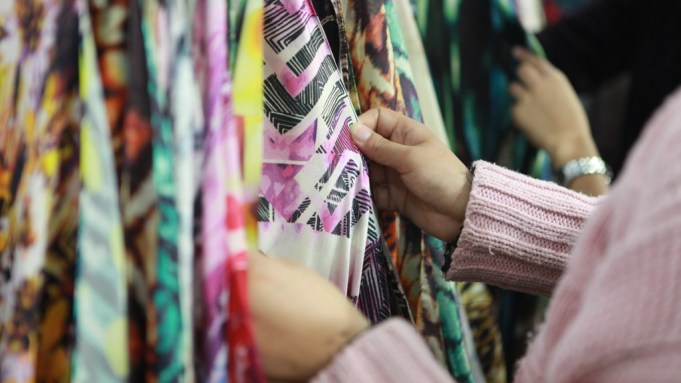 BEIJING — This year’s Intertextile Beijing Apparel Fabrics show upped the ante on innovation with a decidedly international flair, combining high-end European craftsmanship, an Asian pavilion and a host of other special and expanded touches to one of the country’s top apparel exhibitions.

The show, which ended its three-day run March 29, reportedly drew a record number of exhibitors, with 1,300 different vendors setting up shop in the China International Exhibition Center. Organizers have not yet released the final details about how many visitors attended the three-day event, but last year’s Intertextile Beijing drew a record 26,000 people from 78 countries and regions, according to organizers Messe Frankfurt. The name of the game this year was an overt push to highlight high-quality offerings, boost creativity and innovation in design and a drive to meet more demanding consumer tastes, especially among Chinese, who are scaling up quickly.

Among the show highlights was the return of the Milano Unica pavilion, which brought together creations from more than 100 top Italian textile producers. The trade show’s organizers are working on a long-term partnership with the group. Wendy Wen, senior general manager of Messe Frankfurt Hong Kong, said the Milano Unica collaboration grew from an initial partnership at the Messe Frankfurt Shanghai apparel fair.

“We have received a lot of positive comments about the potential business opportunities that arose from the participation of the Milano Unica pavilion last year,” said Wen. “The partnership will definitely be a continuous effort to integrate high-quality and well-made Italian textile products to a burgeoning Chinese marketplace.”

That hunger to move up the value chain, in a way that appeals to Chinese and international clients, was evident throughout nearly every booth at the fair. Vendors and visitors spoke of seeking high-quality fabrics and constructions to amass a competitive edge. The move may be especially important in China as Chinese consumers’ wealth expands and options grow. The same appeared to be true for buyers from developing countries, as well as Europe and the U.S.

“We’re looking for interesting and very high-quality products that can appeal to our customers in new ways, with price not always being the first question,” said Liu Hong, a buyer for an undisclosed Chinese company. “Of course, price is still a concern.”

The fair also hosted a special Salon Europe area with fabric and accessories from a variety of European suppliers that was 20 percent larger than last year. A Turkish pavilion with special wool and suiting materials made its debut, while Japan, Taiwan, South Korea and Pakistan were represented in the Asian pavilion.

In the textile trend sessions looking toward 2014, experts projected a strong demand for pastels, natural fabrics, ethnic flavors and special craftsmanship to set apparel apart. Mixing is apt to be popular, with edgy colors and pastels working together, along with new techniques in crafting vibrant colors.

But not all participants were roundly pleased with the fair. Several Chinese vendors who have attended for many years said they did not feel the venue was working well for their needs.

Li Linghui of the Shanghai Unitex Group, which specialized in threads, said there were fewer potential customers this year and the program could have included better information for companies trying to acquire an edge.

“Some speeches and lectures on the fair just kept repeating old industrial information,” said Li. “There were fewer novel ideas. So we didn’t learn a lot from the fair.”