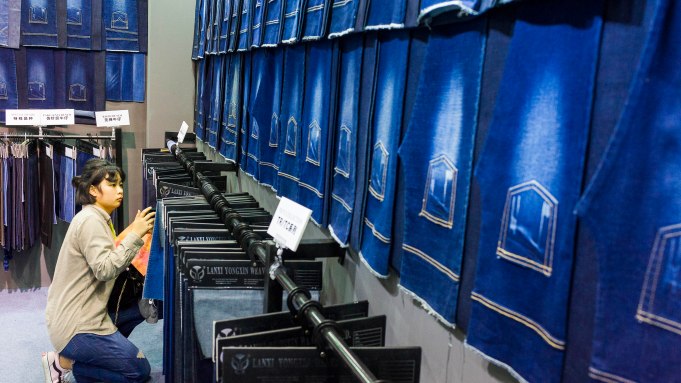 SHANGHAI — At the largest spring edition of Intertextile Shanghai Apparel Fabrics, the focus was on sustainability and innovation, with Chinese buyers keen to explore high-end European product.

Worldwide textile trends, including flexibility, speed, lower quantities, digital printing and local production were all reflected at the Shanghai show, which ran March 14 to 16 and featured 3,386 exhibitors from 22 countries and regions.

The majority of these buyers, of course, come from China. The Chinese market and garment manufacturing industry, while dominated by the mass market, has seen its 300 million-person middle-class increase demand for premium products. This higher-end demand proved a plus for exhibitors from Europe, Japan, as well as those in the Premium Wool Zone.

There was a particularly strong showing from U.K. exhibitors in the Premium Wool Zone, with Brexit working to make sales prices more attractive in the Asian market, though for Chinese customers of Savile Row fabric mills such as Holland & Sherry, price sensitivity isn’t particularly pronounced.

“The spending power is there and they are looking for something that is a bit more expensive and high-quality, by luck or design we are in a position that a large segment of the Chinese market is gravitating toward,” said Josh Lane, Far East regional sales manager for Holland & Sherry.

Though willing to spend, Chinese consumers are still not as confident as their Western counterparts when it comes to choosing color combinations, though according to Lane, they are willing to take risks with flashier materials.

China’s neighbors in the Asia region, particularly Japan, are also beneficiaries of this desire for premium product, with the Japanese Pavilion of 30 exhibitors organized by Japan Fashion Week proving a particularly popular spot at Intertextile.

According to Akira Kawashima, senior director of Japan Fashion Week’s Textile Division, Japanese textiles manufacturers run the gamut from those known for their highly technical innovations, an attractive trend as ath-leisure and sportswear continues its spread into every facet of fashion, to the distinctly lo-fi end, answering a call from the Chinese market for natural fabrics with environmentally friendly credentials.

“At previous shows, buyers cared about the quantity, but today they care about the quality. This is a big advantage for the Japanese exhibitors because the buyers are changing and they want our good quality, Kawashima said.

“Chinese buyers and overseas buyers tend to care whether a product is made in Japan.”

Sustainability is a buzzword in the textile industry around the world, but nowhere is this more pronounced than in China, where a government-led crackdown on environmental pollution has impacted production practices and consumer attitudes alike.

January saw the implementation of a new environmental protection tax in China, with companies charged for noise, air and water pollution and generating solid waste. This tax replaces a pollutant discharge levy that had been in place for 40 years, and is set by local governments — with some of the regions suffering from worse pollution setting higher rates — and also incentivizes companies with lower emissions.

In keeping with this trend, the All About Sustainability section of Intertextile Shanghai saw the debut of the Collaboration for Sustainable Development of Viscose a group of 10 leading viscose producers in China, which collectively account for more than 50 percent of the world’s viscose fiber staple production, that have joined to produce a sustainability roadmap for the viscose industry.

Digital printing, which is fast making inroads in China due to its ability to reduce pollution during the production process, was also more visible at this edition of Intertextile Shanghai.

This growth has coincided with demand for a broader spectrum of yarn products, whereas cotton and natural materials were previously dominant, the variety of synthetic and fancy yarns have increased dramatically.

Looking ahead to the autumn edition of the show, which has traditionally been held in October, organizers have elected to move the date earlier, into September, closer to European fashion weeks.