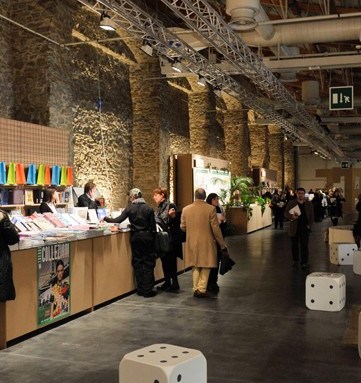 Italian spinners presenting their collections at the show, which will take place in Florence July 7 to 9, intend to offer a bright color palette focused on shades of green, giving a nostalgic take on the winter season with hand-knit and vintage effects on fibers.

“We feel very strongly about product development and the need to create reasons why people should buy our yarns,” said McArdel.

Todd and Duncan also is making moves to strengthen its global reach. Parent company Dawson International recently sold the Scottish spinning company to Chinese cashmere business Ningxia Zhongyin, which has supplied the company with cashmere fiber for more than five years. Zhongyin is one of China’s largest cashmere dehairing and combing businesses and was founded in 1994.

Todd and Duncan’s European management team, which helped return the business to profitability last year, will remain in place. The company employs some 200 people in Kinross, Scotland.

McArdel said the deal is “looking way beyond the difficulties of the current economic climate to a picture of how the future global cashmere industry will look in a few years’ time.”

The company will introduce an industry first at Pitti Filati — a fine, lightweight woolen spun cashmere dubbed Ghost. The yarn can be knitted using existing machinery and contains a filament that disappears when washed, producing 100 percent cashmere garments at almost “half the natural weight.”

Zegna Baruffa will showcase handcrafted effects in its newly developed sable effect yarns. The yarns give knitwear a vintage effect and a handcrafted feel that is achieved by adding silk.

As with other mills, the poor economic environment continues to provide challenges. Alfredo Botto Poala, Baruffa’s chief executive officer, said the company’s sales dropped 12 percent so far this year compared with 2008. Giacomo Festa Bianchet, president of Lora Festa, which offers cashmere produced in China, said the company’s volume is down about 15 percent from last year.

“The market feeling is for volume in form and volume in yarns,” said Cristiana Cariaggi, communication manager for cashmere spinner Cariaggi.

The company has been delving deeper into natural fibers. It recently reached a deal with the New Zealand Merino Company to purchase Zque, a certified merino wool that guarantees the wool purchased comes directly from New Zealand producers and is obtained through sustainable practices. Also inspired by the feeling of hand knitting, Cariaggi will present new carded qualities called Kakakorum, Himalaya, Pamir and Piuma Tweed. Crochet looks and textured aspects will be key to the range.

“Thick merino yarns that appear handmade” will be on show at Filatura Tessitura do Tollegna, said Stefania Bernardi, area manager.

Alberto Bana, product manager for the Grignasco Group, said the spinner would be offering “new blends such as wool, alpaca and soya that offer a soft handle similar to cashmere.”

“Italians are still requesting the high qualities, whereas 100 percent merino and extremely fine counts are in demand from the American market,” said Stefano Borsini, president of Igea.

Sales have fallen 10 percent at Igea compared with last year, according to Borsini, but he sees opportunity in rising interest in wool. Igea will showcase voluminous yarns, including blends of wool and mohair achieved through a production technique the company has termed “airflow.” When knitted, the yarns have a chunky appearance, yet have the advantage of being light. Other novelties from Igea include a brushed mohair yarn with a furlike appearance.

“Blended yarns such as those containing 70 percent cashmere are increasingly important at this time,” said Silvio Botto Poala, director of Botto Poala.

Mills are expected to present a stronger color palette overall during the show. Botto Poala will preview “a lot of blues, greens and oranges,” said Silvio Botto Poala.

“People want some color in the midst of this economic gloom,” he added.

The company also has increased its color card to 115 colors from 80, a change that will be echoed elsewhere.

At Cariaggi, Cariaggi said the mill will be using color as “the most effective way to update.” Greens will make a strong appearance at Filatura Tessitura do Tollegna Spa and “soft natural colors such as organic green” will be featured at Grignasco. Loro Festa will showcase 90 stock service colors.

A stronger dollar is aiding mills and fueling optimism, as well. Baruffa’s Botto Poala said the dollar is making its pricing more competitive and allowing mills to resist pressure to lower their price points.

“We intend to maintain a strong policy on price,” he said. “We know our costs and quality.”