As they prepare for the Pitti Filati fair, yarn makers bank on high end, exports. 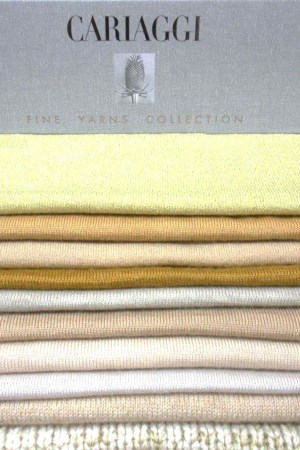 Stormy economic conditions have darkened prospects for many Italian yarn spinners in recent seasons, but industry operators say long-awaited recovery in Japan, plus growth in the U.S. and other export destinations, are reshaping the sector to benefit high-end specialists, and stoking the forecast for the coming season.

Spinning mills will show their fall-winter 2014-15 yarn collections at the Pitti Filati yarn fair July 3 to 5 at the Fortezza da Basso in Florence.

“What is interesting is that high-quality yarns are growing, while medium and medium-low level yarns are stagnant,” said Raffaello Napoleone, chief executive officer for fair organizer Pitti Imagine.

“It hasn’t been a bad season,” added Napoleone, meaning sales for the spring-summer 2014 yarn collections were not as negative as industry figures seem to indicate.

“The greatest suffering was found for spinning” in the Italian textile sector, while “silk weaving appears to be the best performer,” wrote SMI.

Napoleone maintained that the outlook is positive. Prepaid visitor registrations to Pitti Filati are up 15 and 16 percent for foreigners and Italians, respectively. The return of Italian visitors marks a significant change from recent fairs that have seen a squeeze on domestic buyers due to Italy’s troubled economic climate.

SMI found that exports for the textile and clothing sector — including yarn, fabrics and garments — grew 15.1 percent to the U.S. and 14.9 percent to Japan in 2012.

“We had Japanese visitors who we haven’t seen for a long time,” said Stefano Salvaneschi, head of the premium cotton yarn-maker Iafil, speaking of the January edition of Pitti Filati.

Cristina Cariaggi, a director, called sales “on trend” for 2013 with “modest growth.”

“In terms of turnover, 2012 was a good year,” said Stefania Bernardi, area manager for high- to medium-end merino wool yarn specialist Lanificio di Tollegno, who added that 2012 sales were about 150 million euros, or $200 million, up 6 to 7 percent over 2011.

While 2013 has so far proven more difficult, Bernardi said there was reason to be upbeat. She explained that the year is far from over, since the wool yarns for winter collections account for about 80 percent of sales.

Bastagli called the firm’s creative viscose offerings the “battle horse” of the business, although the winter collection is enriched with exotic woolens such as mohair and baby alpaca.

Filpucci focuses on satisfying a narrow luxury market for summer, but spans a wide range of luxury and diffusion yarns for the high-volume fall and winter season, a strategy that “is going very well,” Gualtieri said.

Cariaggi has elaborated on the idea of wrapping up in “clouds” of yarn that have the lightweight qualities of the spinner’s summer yarns, but with added volume, softness, luminosity and furlike effects.

While the high season for premium Egyptian cotton yarn spinners Iafil and Filmar is fading with warm winter yarn collections, neither is sitting out the July fair. Iafil is offering carded Peruvian alpaca worked in Italy’s Biella wool district with a double-dyed finish. Filmar is launching a book and a Web site on the Egyptian Cotton Museum in Cairo to share the history and culture of Egypt’s long-fiber cotton production.

Filmar and spinner Olcese are also continuing their efforts to relaunch Filoscozia-certified, gassed-cotton yarn they reintroduced last season. Devised in the early Eighties, the soft hypoallergenic cotton was made with extralong staple cotton from Egypt, enabling spinners to make silkier yarns that were less prone to pilling. A Filmar spokeswoman said certification and rebranding initiatives are under way, as well as collaborations with New York’s Fashion Institute of Technology and Milanese art school NABA.