The Japanese textile industry continues to stagnate, as unfavorable exchange rates and surging production in China and other low-cost countries bite into... 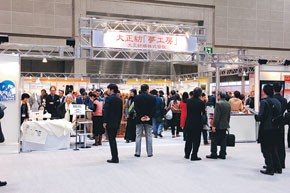 TOKYO — The Japanese textile industry continues to stagnate, as unfavorable exchange rates and surging production in China and other low-cost countries bite into business.

But companies here are developing strategies to cope by focusing on more complex fabrics and expanding their production facilities in China and other low-cost Asian countries.

Japanese textile makers are facing challenges from abroad and on their home turf. The appreciation of the yen to the dollar, currently trading at about 99 yen to the dollar, is hampering exports considerably and the business outlook, particularly for the U.S., isn’t rosy. Meanwhile, Japanese consumer spending, including on apparel and accessories, has been flat. Those themes are set to dominate the 2009 spring edition of Tokyo textile fair Japan Creation that begins a three-day run on April 23.

“The Japanese textile market has been floundering for a long time at the bottom of the league and can’t seem to break loose,” said Yushiro Taga, an industry veteran and president of Growth Arc Inc., a supplier to labels like Jil Sander, Yves Saint Laurent and Balenciaga. “I have seen many textile-related manufacturing companies [including weavers, dyers and yarn makers] suffer and fall into financial difficulties.”

The country’s textile industry fortunes are intrinsically linked with that of China, as a manufacturing rival, a production base and Japan’s largest trading partner.

“China has a big presence in the Japanese textile market,” said Masao Nishimura, vice president and secretary general of the Japan Textile Federation. “Japanese companies are now producing in China and the goods are exported back to Japan.”

Japan’s production of textiles has steadily decreased since 2000, as its textiles trade deficit has widened thanks to China. Japan imported $30.7 billion worth of textiles and apparel in 2007, 75.5 percent of it from China, according to the most recent figures from the Japanese Chemical Fibers Association. Japan exported just $8.79 billion of those items the same year, 39 percent of which went to China.

But China also could become an increasingly important market opportunity for Japanese textile makers. Morgan Stanley analyst Akiko Kuwahara published a report this month after visiting the Nantong, China, operations of Japanese textile giants Teijin, Toray and Mitsubishi Rayon. Although those companies mainly use their Chinese manufacturing facilities to supply Japanese customers, they are well positioned to serve growing demand within China as well, Kuwahara noted.

“As the Chinese market for differentiated and high-grade products takes off, we think the Nantong bases of Japanese firms have an opportunity to achieve higher levels of earnings growth if they can capture this demand,” the analyst wrote.

“There are many requests for innovations,” Okawara said.

Growth Arc also noted a trend toward more environmentally friendly materials. Taga stressed the importance of passing on textile knowledge to the next generation, especially since Japan’s population is rapidly aging.

“We need to raise younger people to be specialized professionals and have high-skills in textiles, creating something new to propose to the markets,” he said.