AMAMI, Japan — On the island of Amami Oshima in southern Japan, sandwiched between beautiful white-sand beaches and lush forests, lies over 12 acres of land owned by the Koshima family. Here, brothers Tokuharu and Takaki Koshima carry forward the work their grandfather started more than 50 years ago: producing a very specialized, handmade type of Japanese silk that is unlike any other textile in the world. 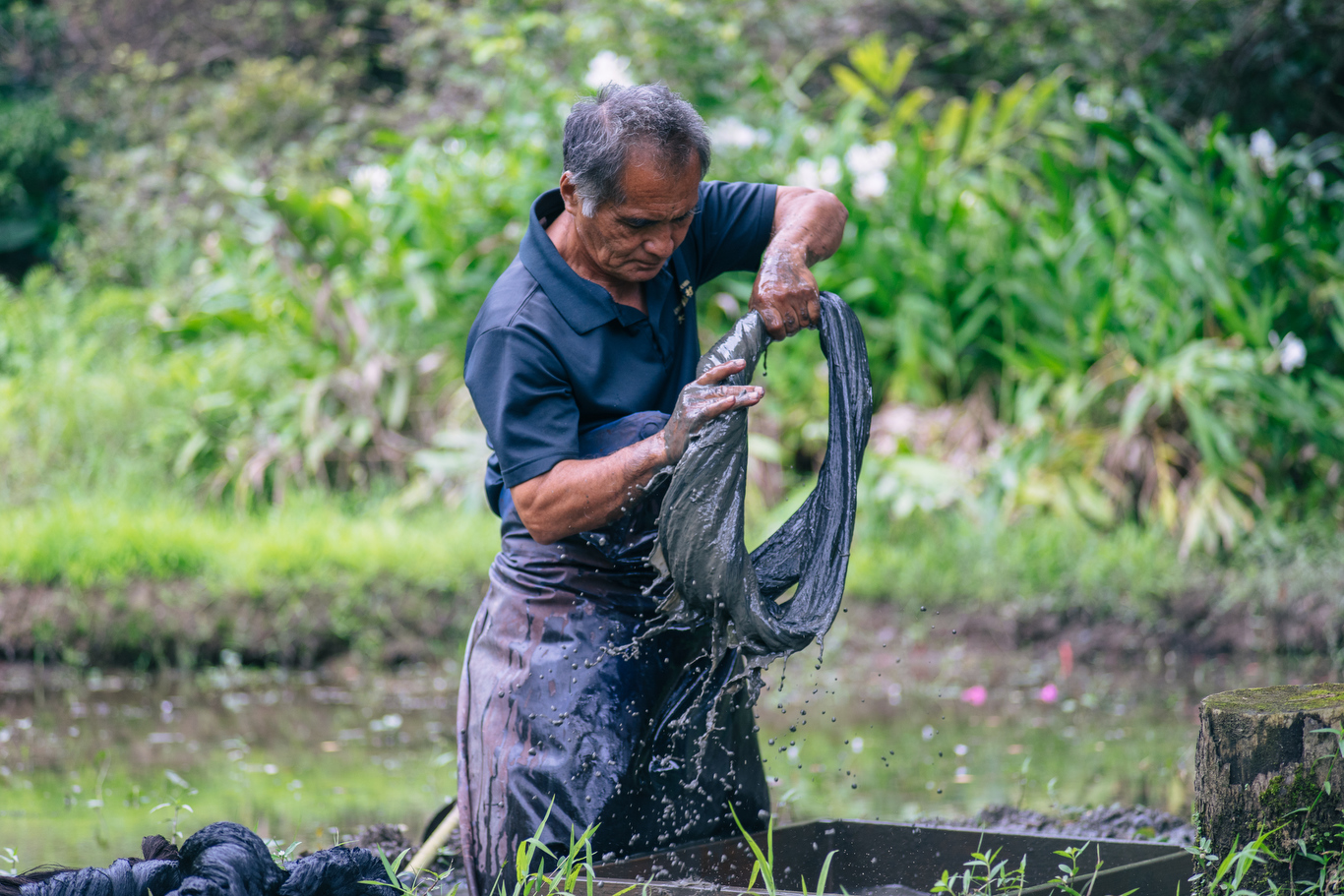 Oshima Tsumugi is a type of silk pongee that has long been prized as one of the absolute highest quality kimono fabrics. But as the use of kimonos continues to dwindle in modern Japan, so too does the production of Oshima Tsumugi. Now the government is working together with manufacturers and contemporary fashion brands in an effort to keep this unique fabric alive.

There are many factors in its production that make Oshima Tsumugi special. It is believed that the fabric first started being made some 1,300 years ago, although recently tools used in its production have been unearthed that date back even farther.

The process starts with simple, white silk threads. Originally these also came from the island, but today they are mostly imported from Brazil. To create solid black threads, they are first dyed in a mix of tannin and boiled chips of wood from the Yeddo hawthorn tree. Nicknamed “iron tree” in Japanese for its very hard wood, its color resembles that of rust, which is also the color of the silk threads after being dyed in the mixture 20 times. Next comes the process of mud dyeing, in which skilled artisans in rubber waders continually dunk the threads into muddy water with their bare hands, no matter the season. The unique, iron-rich Amami mud creates a natural chemical reaction with the wood dye, turning the threads a deep chestnut brown. After repeating this wood-to-mud natural dyeing process five times, the threads finally reach their final black color. But this is a black that, until today, chemical dyes have not been able to reproduce: deep and warm yet shiny and soft due to the natural components. 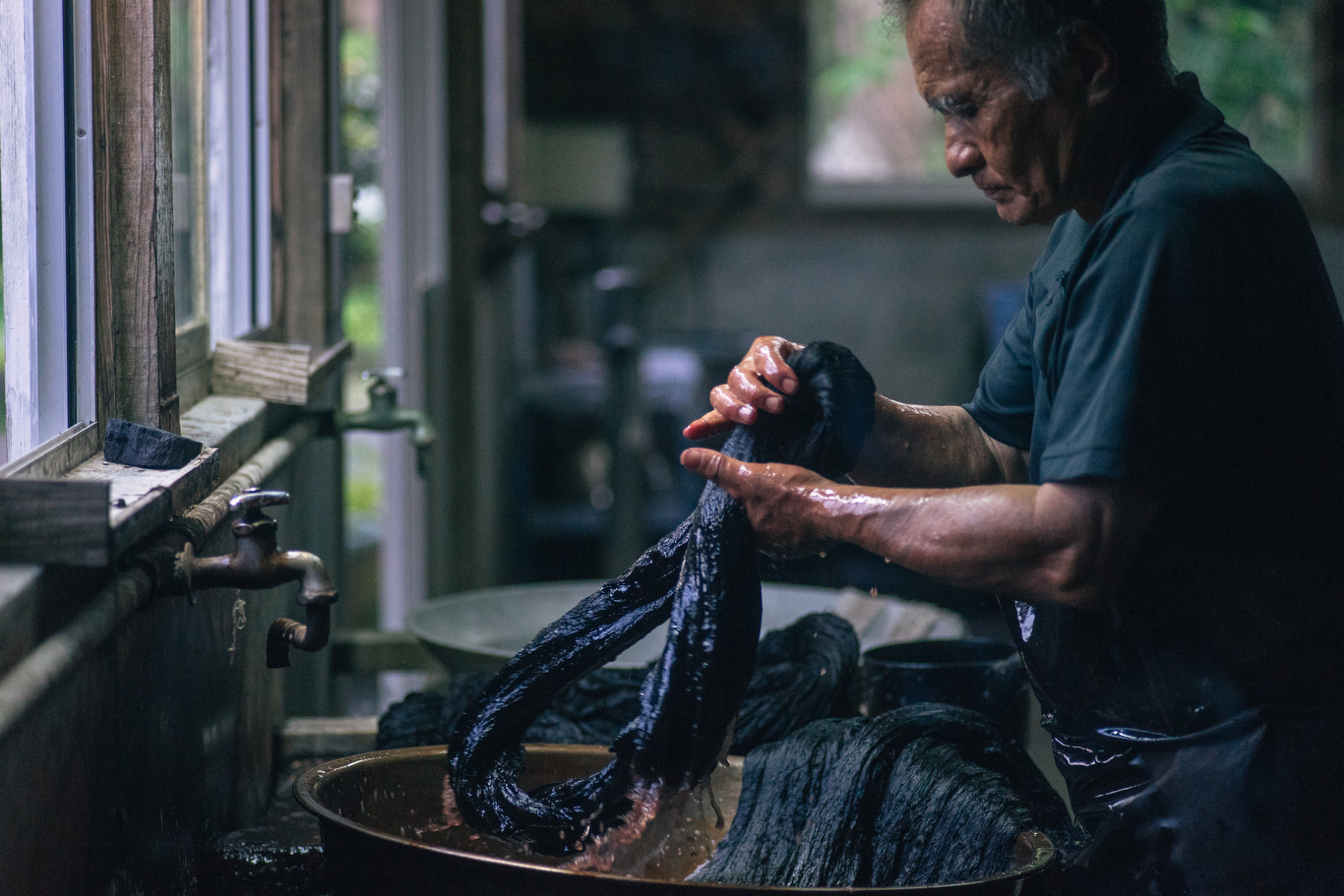 Katsuya Taira is a 68-year-old artisan who has been working with Oshima Tsumugi for over 30 years. He spends about four hours a day bent over in the mud, during which time he dyes about 125 miles of silk thread. It takes at least 10 times that much to make one roll of fabric.

“We change the place where we do the mud dyeing about once every two weeks because after a while the soil starts to become depleted of iron,” Taira said. “It’s a physically demanding job, but I want to continue doing it as long as I have the strength to.”

As labor intensive as it is to dye these solid black threads of silk, this is hardly the most remarkable part of the process. In order to create the beautiful geometric and floral patterns that are typical of Oshima Tsumugi, some threads are woven together with cotton before being dyed. After the cotton is removed, the threads have a stripey look to them. But these stripes are anything but random.

The patterns that will eventually appear on Oshima Tsumugi start out as paintings. These are then laid out on a grid with differently colored dots making up the image of the painting. Originally done by hand, this is the only part of the process that has now been computerized. 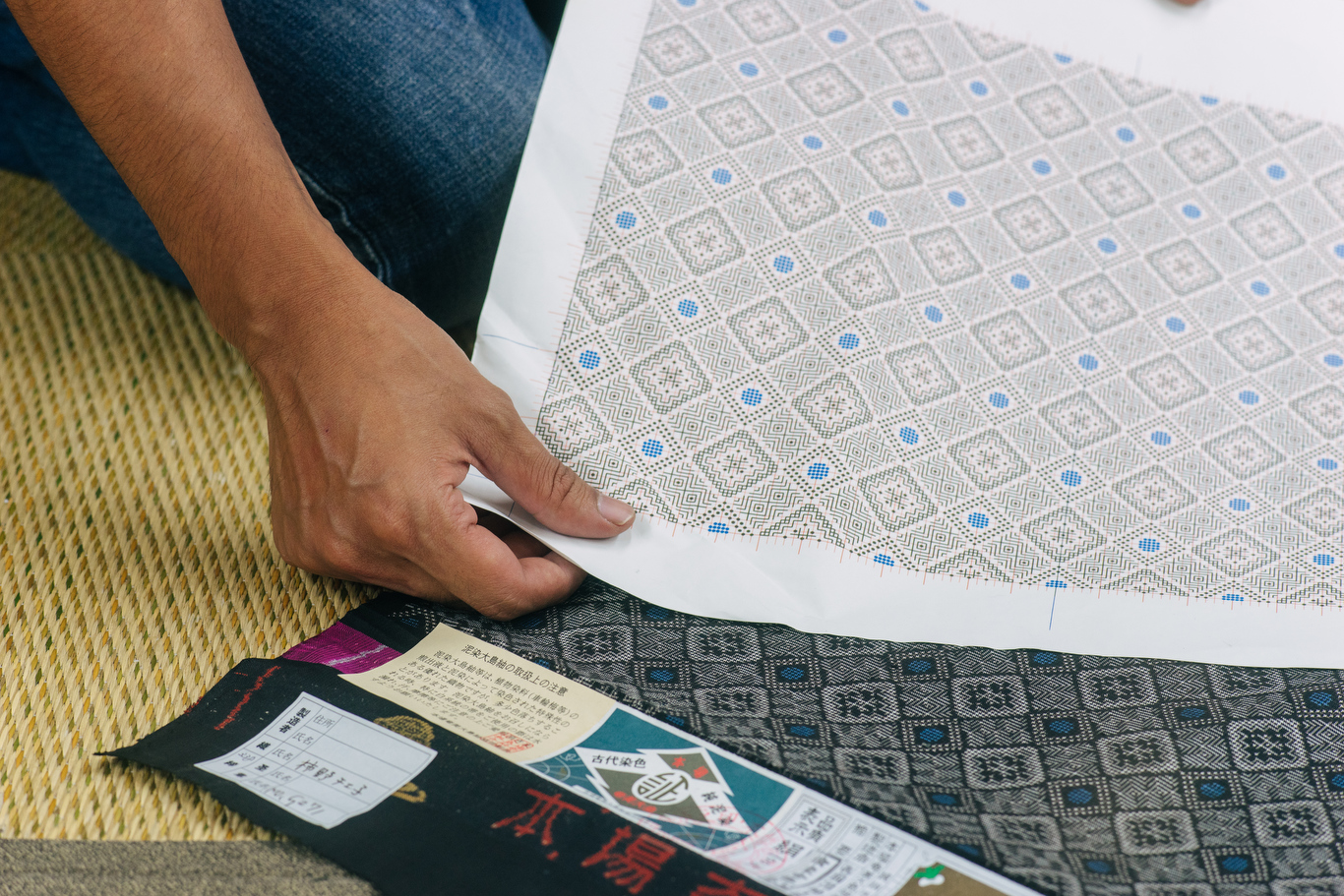 The grids are used to determine where to weave the cotton onto the silk, as those are the areas that will remain white even after the threads have been dyed black. After removing the cotton threads certain sections at a time, other colored dyes are applied to the white areas using a knife-like spatula. The more colors the pattern uses, the more drawn out the process. This step is the most important in a very complex process. If even one mistake is made, the design won’t work when woven into fabric. It takes between six and 10 months for the threads to complete the entire dyeing process.

Finally, after all the dyeing is complete, the silk is carefully threaded into a handloom so the weaving can begin. This is the first stage when the pattern starts to become visible. But as the silk stretches on the loom the patterns can get out of sync, so the weavers must constantly readjust the threads to match each dot on the grid pattern. One weaver can make about 12 inches of fabric a day; it takes two months to weave a full 40-foot roll. 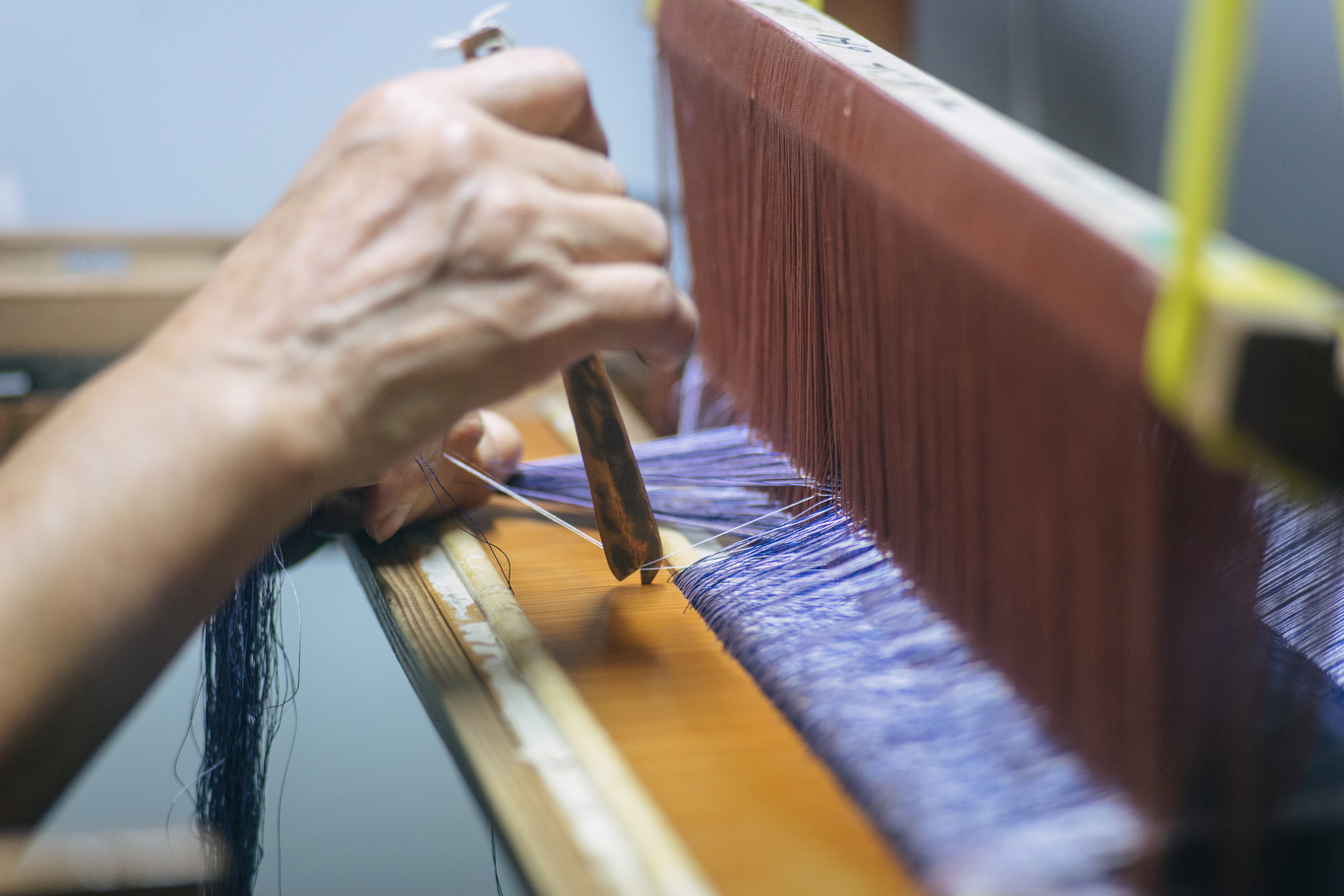 “What is unique about Oshima Tsumugi is that you never know if each part of the process was completed successfully until the very end when it’s all finished,” Taira said. “That suspense of not knowing if I’ve done my job well is what attracted me to this work.”

Finished Oshima Tsumugi is beautiful in ways that don’t come across in photographs.

“It’s not too soft or too stiff, not too thick or too thin, it’s lightweight but warm because of the dense weave, and it doesn’t wrinkle easily,” said Tokuharu Koshima, the current president of Oshima Tsumugi Mura, a production facility founded by his father that also offers guided tours. “It’s not just another kimono fabric.” 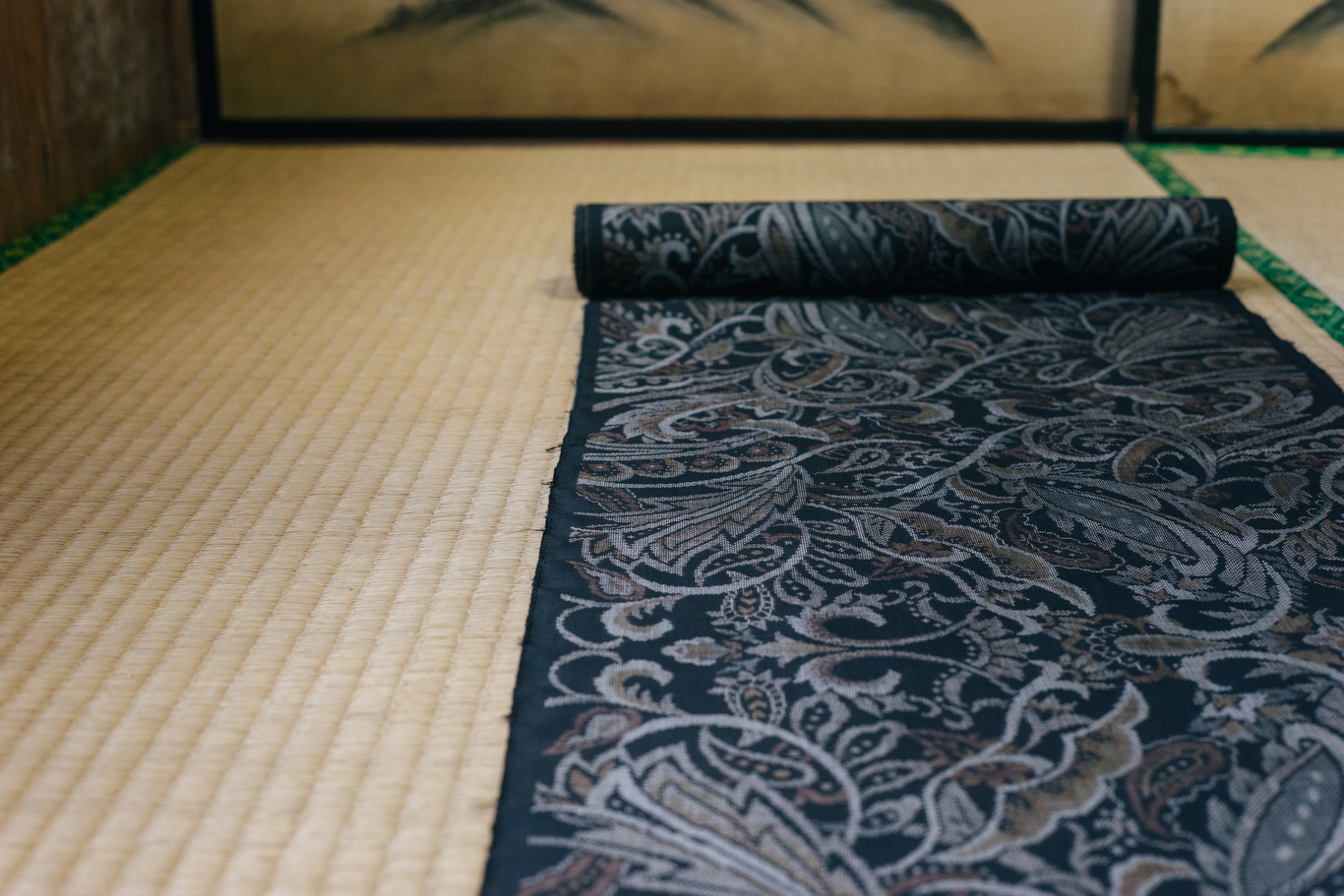 But like many other traditional Japanese crafts, its production is limited to one place — in this case the island of Amami Oshima — and has been steadily declining in recent decades.

In an effort to keep this unique skill alive, the Japanese government is working with manufacturers to expand its use beyond kimonos. An exhibition opened last week at the Isetan department store in Tokyo’s Shinjuku district. On display are fashion-forward pieces designed by some of Japan’s leading brands, all made using Oshima Tsumugi. There’s a dress by Yohji Yamamoto, jackets by Needles, and shirts and tops by Sasquatchfabrix, among others.

“Because this was my first time using Oshima Tsumugi, I decided to go to the production facility to see it first hand. The warp and weft have to be woven together to make the pattern, each thread is designed one by one, the yarns are mud-dyed according to a particular design, and then they’re handwoven. I was able to really see that this long, intensive process produces the most high-quality, exclusive fabric in Japan,” said Daisuke Yokoyama of Sasquatchfabrix.

Yokoyama was particularly taken by an antique version of Oshima Tsumugi from the early 1900s, and he asked if it would be possible to reproduce it.

“I think the advancement of technology is an extremely good thing, but I felt a chicness or stylishness coming out of that long [production] process,” he said.

At least one of the brands involved in the Isetan event has used Oshima Tsumugi before. Keizo Shimizu said that he used both the mud-dyed black and a purple dyed with sweet potatoes to make a limited run of mule sandals for his spring and fall 2016 collections for Needles. But the Isetan event was the first time he had used it for clothing. 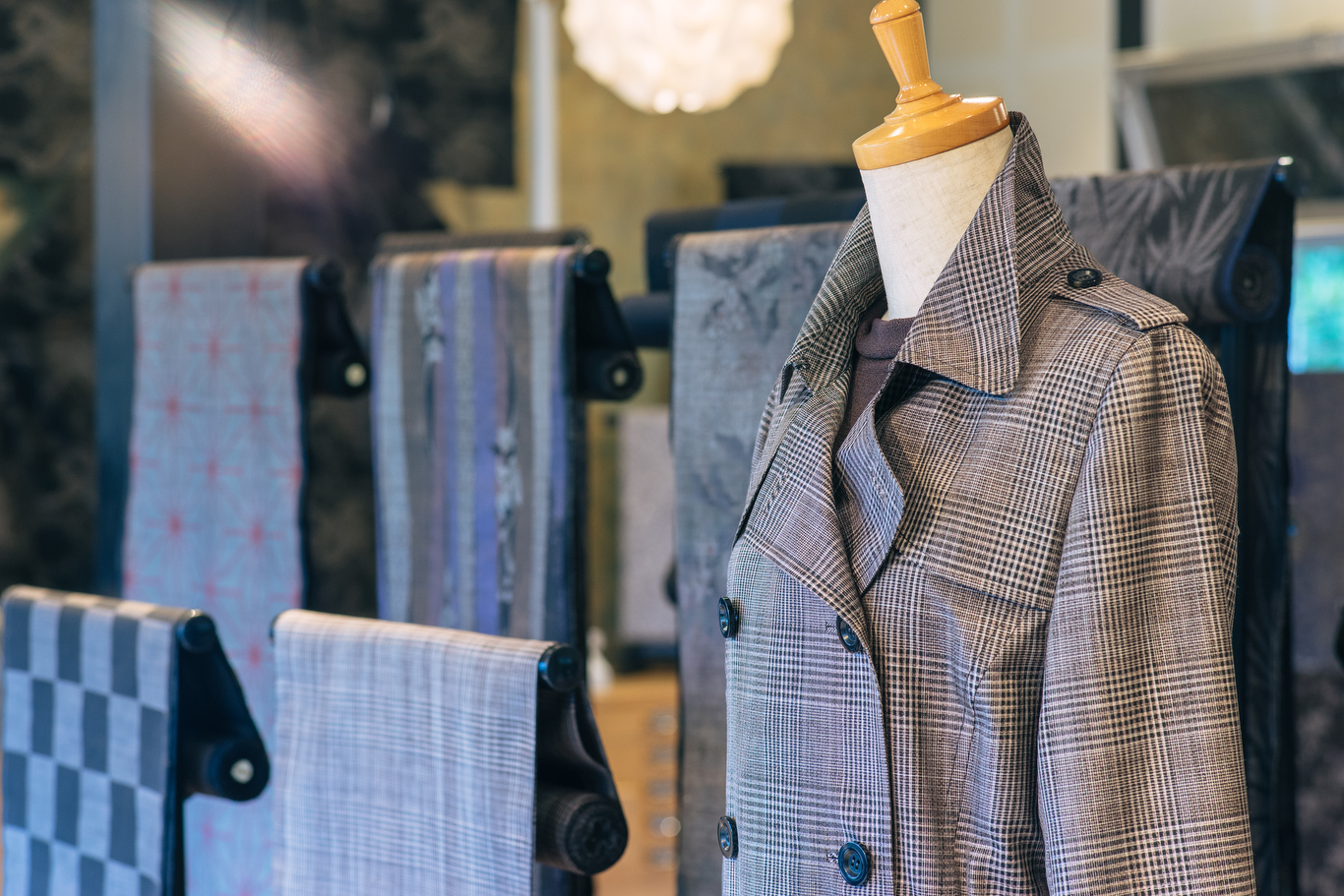 “In order to show off how great the fabric is, this time I made two styles of outerwear. I think I was able to bring out the magnificence of the fabric, but because of the narrow width of the fabric, the design [possibilities] were limited,” Shimizu said.

A narrow width is typical of kimono fabrics, a point that Yokoyama also mentioned he thought would limit widespread use of the Oshima Tsumugi in modern clothing design. Another limiting factor is its high price due to the labor and time intensive way in which it is made.

But Tokuharu Koshima, a trained fashion designer himself who studied in Paris, is determined not to let the fabric become a part of Japanese history.

“I want to keep using Oshima Tsumugi in new ways and making new things,” he said. “I think it’s important to keep thinking of new ideas.”