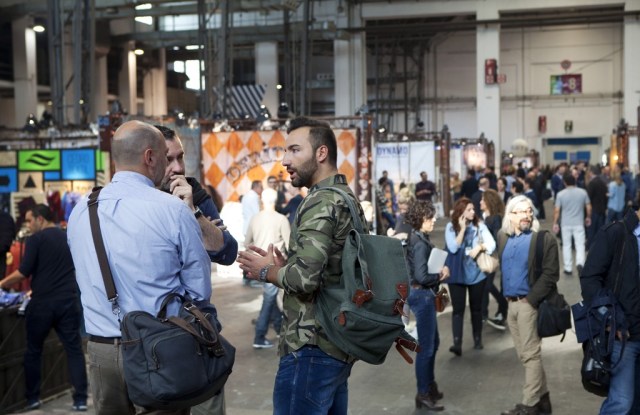 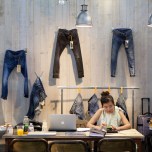 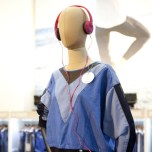 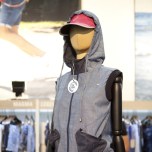 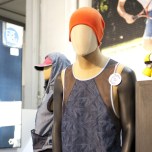 BARCELONA — Buyers at Denim by Première Vision’s second edition at the Montjuïc exhibition center here last month continued to wrestle with just how much innovation they can bring to jeans without sacrificing the “jeans” moniker entirely.

The show served as a platform for the launch of new technical fibers, blends and fabrics, with much attention drawn to knit interpretations of denim as the market responds to the rise in popularity of ath-leisure looks and the impact they’ve had on a challenged jeans market. However, buyers appeared to be less convinced by the commercial appeal of knit denim and athletic interpretations of jean silhouettes.

Stretch fabrics, especially for men, were ubiquitous, as was the emphasis on comfort.

Held last month, weeks after the first Kingpins supplier show in Amsterdam, exhibitors and buyers picked up where they had left off at the last Denim by PV, seeking ways to inject newness into the denim market.

Despite the backdrop of a challenging market, especially in the U.S. where women’s jeans fell both in units and dollars, the mood was optimistic among industry players. The number of European designers — including Gucci and Maison Martin Margiela — who had showcased denim on their spring 2015 runways gave them encouragement for the fabric’s resurrection as a fashion leader.

Other trends included lightweight denim, fabrics resembling linen or incorporating linen in them, sometimes with stitching for a more rustic hand. The fair provided various denim options beyond jeans, such as denim shirts, dresses, jackets and even kimonos. The color palette for spring 2016 includes shades of gray, forest green and dirty or chalky whites.

Invista presented “Lycra Beauty” to the denim community, a product already used in lingerie and swimwear for its shapewear properties.

Invista also extended its collaboration with fiber company Lenzing on a new fiber blend, combining its Coolmax fabric with Lenzing’s Tencel, for moisture absorption and softness. It also has a sustainability component — Coolmax eco-made fiber is made from 97 percent recycled polyester and Tencel is made from wood pulp, a renewable raw material.

“We believe the future is going to come out of new fiber technologies,” Bell explained. “There are some smaller companies that aren’t actually showing within the show but came to meet business partners for their new technologies….That is good because it means denim industry is connecting beyond its normal boundaries. They want to help the denim industry grow: They believe theirs is an opportunity. Some come from the protection industry; the military.”

Bell continued: “I think there’s a desire of people for clothing to be more protective. There is bird flu; there is Ebola. Unconsciously people want their clothes to offer extra protection and make you feel better. There is a well-being fiber movement. I think it’s inspired by people’s fears of what is going on in the world.”

The fair also showcased upgrades in laser technology. Jeanologia, the Valencia, Spain-based producer of eco-friendly finishing equipment and technology for denim and other textiles, presented a new optical system called Light Scraper creating virtual slubs on denim fabrics. It incorporates a virtual sandpaper that replaces manual scraping, a dangerous technique for workers who use it. “This is the dream of every jeans factory in the world,” said Enrique Silla, president of Jeanologia, who noted that the optical system can be used in existing machines.

Istanbul-based Calik Denim translated them in its Extend Plus line meant for men. “Men need a different kind of shaping support. We need stretch along the vertical direction of the fabrics, the warp and not around the weft,” product development manager Ali Tekin explained. “It looks very masculine and we can move in it.”

Tavex made that point by having BMX champion Alberto Moya — wearing jeans from its Fitness Denim line — performing every hour at its booth.

Ramon Vidal of the denim line Washhouse in New York stressed the importance of terminology. “Men don’t like the word ‘stretch,’ they like the word ‘comfort.’”

Vidal said Washhouse has worked on denim for the Marc Jacobs collection that will be in stores in December, he said. “It is Japanese quality — Kurabo — with beautiful embellishments, priced in the $400 range. The denim looks he did for his last Louis Vuitton show were a big success.”

“Rigid is not being referred to as just men’s denim but unisex. They have realized there are women who want 100 percent cotton again and that’s refreshing,” she said.

Richardson said she liked the “shades of grays, washed-down blacks, chalky whites —grays and whites with a touch of shimmer. There also was a gray shade with a touch of indigo giving a lavender cast with a slight sheen popping up in some places, throwing off a ‘galactic,’ ‘space-ship-y’ shade. It was pretty and modern.

“Denim has traditionally been a canvas to express oneself, and there is more emphasis on finishes that make a statement, washed, faded, bleached, stained, splattered, tattooed, painted to tell one’s story,” she said.

Mim Heyes, a buyer from London-based fashion supplier Moseley Road that counts Topman, House of Holland and Matthew Williamson among its clients, noticed a trend in “retro fits” including mom, girlfriend and boyfriend jeans.

“Knit denim is a question mark for us,” Heyes said. “Jersey is always a cheaper retail price point than ‘knitted’ indigo denim so it remains a challenge for retailers to position this product at an elevated price point and for customers to see added value in this product.” She praised the open construction fabrics at weavers such as DNM Textile, Bossa Denim and Orta Anadolu; the “beautiful comfort stretch” at Isko and Calik Denim’s quality fabrics. She liked new casts such as “smoky blue, forest green and dirty white.”

Steve Romero, men’s denim designer for Seven For All Mankind, cited the “reemergence of being more dressed up.…The denim industry is going back to more maturity.”

Seven For All Mankind recently launched cashmere denim retailing at around $250. “It has 10 percent cashmere — it is hard to have more. It has just hit stores and is among our top sellers. People are willing to pay more for something special,” he said.

The visitor count at the fair increased 22 percent from 2013 to 3,905, with attendance from North America rising 38 percent to represent 6 percent of visitors, according to show organizers. Twenty-eight percent of visitors came from Spain and the balance, 72 percent, from other countries. Buyers included representatives from J Brand, American Eagle Outfitters, Hugo Boss and Esprit.

The show gathered 98 exhibitors, versus 100 in May.

Show director Chantal Malingrey-Perrin said the show benefited from a curiosity effect last season for its Barcelona debut. She said there was a more diverse jeanswear offer, including denim jackets, skirts and shirts. “It is a positive thing because it means companies have invested to develop these products,” she said. Among the key strategic developments for the show, Malingrey-Perrin stated a desire to develop “exhibitors who have the ability to provide the entire look around the five pockets.”

The next edition of Denim by Première Vision is scheduled for May 27 and 28 in Barcelona.