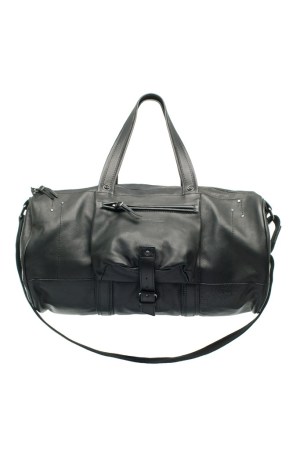 PARIS — Jérôme Dreyfuss, the Paris-based women’s leather goods designer, is tapping into his masculine side for the launch of Monsieur Dreyfuss, an accessories collection for men. Due to hit the brand’s boutiques and a selection of international department stores in January, the collection is inspired and road-tested by the designer’s pals.

Dreyfuss, who launched his women’s accessories line Roots de Luxe in 2002, said around two years ago, he started to get requests for bags from a number of his male friends who were after something in which to carry their growing collections of gadgets and cables.

“Guys before had no need for bags; they put everything in their pockets,” said the designer.

As a busy working father — Dreyfuss has a son with his long-term partner, designer Isabel Marant — Dreyfuss’ design philosophy has always been strongly rooted in practicality. Features on his women’s bags include detachable wallets, integrated credit card holders and exterior pockets big enough to hold baby bottles. The practical needs expressed by his male friends pushed him even further down the functional route. One of his soccer player friends helped perfect the volume of the spacious Diego duffel bag, which is fitted with interior expandable pockets for shoes, while feedback from a photographer chum contributed to the look of the line’s north-south tote, designed to carry a laptop or tablet computer. All designs come with mini pocket flashlights attached on the inside of the bag by thin leather straps.

The collection offers four bag models in leather, goatskin and linen canvas, as well as a range of small leather goods and accessories, such as iPad cases. Over the past year, the designer has been working on a sporty textured Teflon, cotton and polyester blend technical fabric that will be added to the offering.

Dreyfuss hopes the line, which he sees as a bit more rock ’n’ roll in essence than the women’s collection, will also appeal to his female clients.

The Jérôme Dreyfuss brand counts around 300 doors internationally, with two freestanding stores in Paris, one in New York and one in Taipei. A third Parisian store is planned for spring, and Dreyfuss is thinking of opening one in London next year.

“We’re also focusing on developing corners in department stores,” said Dreyfuss, who estimated the brand will generate around 8 million euros, or $11.3 million, in sales in 2011.