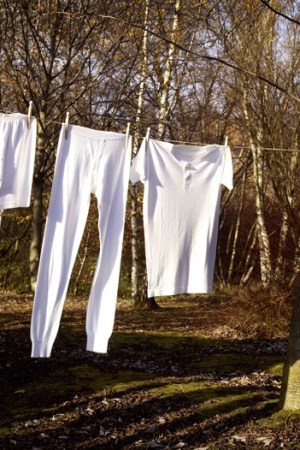 LONDON — The jumpsuit is having a revival on the runways and so is its not-too-distant cousin, the long john.

The high-end knitwear firm John Smedley, which celebrates its 225th anniversary this year, has given the garment it invented a luxury makeover for fall, launching a collection of ultrafine merino wool and cotton underwear for men and women.

“It takes us back to our origins as an underwear manufacturer, creating a collection of fine underwear, which draws on archive patterns and traditional styles,” creative director Dawne Stubbs said. “The pieces are made in the heart of England at our Derbyshire Mill with the craft and skill of generations.”

The women’s collection of briefs, T-shirts, cardigans and lounge pants is available in a palette of plum, cherry red, black and white. Wholesale prices start at $36 for a pair of women’s briefs to $198 for a women’s merino wool shawl neck cardigan.

The men’s line features all-in-one long johns, trunks and T-shirts in black and white. Prices range from $34 for a men’s undershirt to $89 for merino wool long johns.

“It has been a very popular collection,” Dawne said. “We are in a situation where demand is outstripping supply, which is very positive news. Customers are buying the pieces as outerwear and layering garments, and not just as underwear, which demonstrates the versatility of the range in the current financial climate.”

The fall collection is sold at department stores such as Selfridges, Harvey Nichols and Harrods in the U.K., as well as boutiques in France, including Actuel B, Eurl au Comptoir Des Dames and Topkapi, and two specialty retailers in the U.S., The Mayflower Inn & Spa in Washington, Conn., and Jane’s Vanity in Portland, Ore. The line is also available on johnsmedley.com.