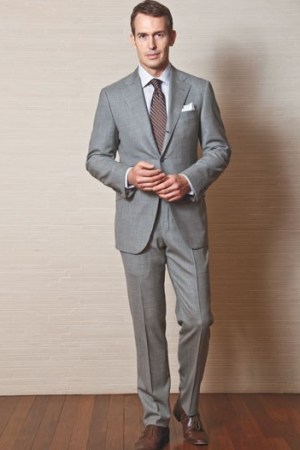 Three months ago, Doug Williams, chief executive officer of HMX Group, revealed how he planned to revitalize the old Hartmarx corporate culture by streamlining operations and burnishing the brands. Now Joseph Abboud gets his turn.

The company’s chief creative officer and president, who tabled his own businesses to join HMX in January, unveiled his overhaul of the company’s 100-year-old crown jewels, Hickey Freeman and Hart Schaffner Marx, in an exclusive preview with WWD. HMX was purchased last summer by SKNL North America for $128.4 million.

“I’ve never worked so hard, or had so much fun,” the designer revealed during the walk-through of his spring 2011 collections, the first completely under his direction. “Everything had to modernized — everything. We have this great heritage but in some ways we started from scratch.”

The designer’s mark is already visible. Known for classic, if stuffy, styling, the brands have swapped their starched conservatism for a more soigné point of view. Hickey Freeman in particular reveals the designer’s signatures: soft tailoring, a tonal palette, textured fabric and a sophisticated play of pattern. His long-time mantra — of balancing European style with American approachability — is at work in the gray chevron suits and range of evening jackets in ecru washed linens. And in general, Abboud has clearly worked to take the stiffness — both literal and figurative — out of the brands.

“There is more romance and elegance to the clothes,” he explained. “We want to take more risks.”

Abboud tackled design issues large and small. He worked with the technical team to craft new silhouettes and a fit program, keeping Hickey’s most popular (and democratic) model, but also adding a 6.5-inch drop silhouette and a body-tracing 7-inch drop. The slimmer models also have less construction. “We sourced different lining and canvas for each. We love our classic customer but we wanted to offer a more contemporary take on tailored, which is softer.”

Abboud also oversaw the creation of a new label under the Hickey Freeman umbrella, called Sterling, which will offer the brand’s slimmest and most advanced styling. The new collection takes a modern, relaxed approach to tailoring with washed worsted and hammered wools, unlined jackets and contemporary colorations of classic men’s wear patterns. “This line isn’t fashion but it’s very updated,” Abboud said.

Sterling, which will be priced below the main Hickey Freeman label — 3/4-canvas suits will open at $895, compared with $1,295 — was created to replace hickey, the company’s contemporary brand, which was discontinued after the sale to SKNL last summer. “Hickey was too irreverent. We need a younger platform but shirts with pot leaves wasn’t right,” Abboud explained. Both the main label and Sterling will be made in the company’s Rochester, N.Y., factory.

The main label and Sterling also have their own sportswear collections — long an overlooked and incohesive category at the old company. As with the tailored clothing, main label sportswear — marked by luxurious, classic pieces such as a linen roll-neck sweater and organic five-pocket jeans — is geared to a more established customer, while Sterling takes a contemporary spin with cropped peacoats, military jackets, luxurious henleys and sweatshirts. Main label knits retail for $395 and jeans for $195. Sterling sport shirts sell for $145, while casual jackets cost $495.

Abboud applied a similar approach to the company’s more moderately priced Hart Schaffner Marx business, overhauling silhouettes, fits and piece goods in the name of bringing the brand’s American heritage to the fore. That heritage is clearly visible in the new label, HSM, which offers soft tailoring and sportswear including bright madras jackets, stained seersucker coats, washed khakis, cable-knit sweaters and other staples of Yankee prepdom. No flat colors or dressy styles. “There’s a big opportunity in sportswear for both brands. The company acted too much like a manufacturer before and we missed openings,” Abboud explained. “Now there is a clear connection between the tailored and the sportswear. It’s a full lifestyle presentation.” HSM shirts open at $85, while denim starts at $95.

The market will get to see the company’s efforts for themselves in July, when HMX hosts a party in its new and expansive headquarters in Manhattan, where construction workers are currently transforming the office space into a polished home for a fashion brand, one befitting the new company’s lofty aspirations.