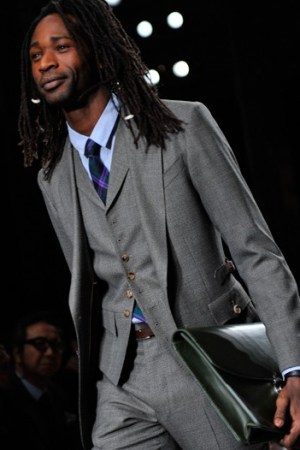 Gordon Gekko, the iconic bankster in the film Wall Street, had this to say to an up-and-comer dreaming of financial glory: “Buy a decent suit. You can’t come in here looking like this.”

This season, although the category has been hit hard by the economic crisis, European fashion brands seem to echo Gekko’s advice. Not that the Eighties-style power suit is making a comeback. But tailored clothing loomed large on the runways in Milan and Paris as labels from Dolce & Gabbana to Dior Homme strived for a more youthful, modern elegance, one that quietly conveys the confidence required to keep HR at bay in tough times.

“Collections have adopted a serious strategy to attract Wall Street to the runway,” says Tom Kalenderian, general merchandising manager for men’s wear at Barneys New York. “Designers are embracing the classic luxury, previously a world they may have ignored as too mature and classic.”

Even avant-garde labels are taking this tack. At the Pitti Uomo trade show in Florence, Comme des Garçons introduced its Homme Deux line of suits, dress shirts and ties, previously available only in Japan, to an international audience. In Paris, Raf Simons combined flawless tailoring with novelties such as a small refl ective shard in lieu of a pocket square. Junya Watanabe continued his collaboration with Brooks Brothers, morphing classic blazers into innovative reversible jackets—a nod to the growing versatility of tailored clothing.

“Suits are still appropriate for the office, but men are increasingly wearing them for several different occasions,” notes Stefano Gabbana, one of the major designers for whom suits represent big business. “Young men may own up to four or five suits, but depending on styling, they can adjust the same one according to their needs, or tone down a jacket with less formal pants, for example.”

But buying habits are changing. When it comes to tailored clothing, designers say, the consumer focus has shifted from replenishment suit purchases to individual pieces. “We have noticed that men are buying more separates,” says Paul Smith, whose fall collection includes a suit with a new shorter silhouette and a five-button jacket. “Hopefully my suits are seen as a special and unique purchase, so not necessarily about replenishing your wardrobe.” James Greenfield, senior vice president at Kenzo, also reports a trend toward separates, though the suit remains “the heart of the men’s assortment.”

Other see a return to classicism. “What we are witnessing, once more, is the classic tailored suit flexing its muscles and emerging as the last bastion of defense in times of vanishing consumer confidence,” says Umberto Angeloni, co-owner of Caruso, which manufactures men’s formalwear for such brands as Dior Homme, Lanvin and Ralph Lauren as well as its own Caruso label.

For the traditional tailored clothing brand, however, selling separates “goes against the concept of suit making,” according to Andrea Perrone, co-chief executive offi cer of Brioni. “We understand that it is a very tough moment, but we must be very careful or we can destroy the steps of what we have done for many years.”

Perrone sees “a war on market share” as designer labels step up their emphasis on suits. “Fashion brands have been hit very hard, so they try to redesign their business,” he says, adding, “At this moment quality, excellence and uniqueness are more valuable than fashion.”

Yet a growing number of leading European suit brands have begun to gravitate toward the fashion world. In recent years, Hugo Boss, Ermenegildo Zegna, Brioni and Canali have all left Pitti Uomo to present their collections in Milan.

“Milan is known worldwide as the fashion capital,” says Elisabetta Canali, global communications director at the family-run Canali, which unveiled its collection this season in Milan after 13 years as a Pitti Uomo mainstay. “We are a luxury fashion brand, and we want to let our different targets know that our company has a new appeal.” The 75-year-old company plans to open new commercial headquarters in Milan this year.

Still, the suit’s classic appeal seems almost timeless. Fashion houses and tailored clothing companies agree: Just as a suit signifi es power in an upswing, it offers a kind of refuge in a downturn, even if consumers are more cautious about buying one.

“Suits were pretty badly hit,” admits Gildo Zegna, chief executive officer of Ermenegildo Zegna, a brand that has successfully straddled the worlds of tailored clothing and designer fashion. Like other Italian suit makers, the company also markets sportswear and accessories, and its Z Zegna designer label has been a hit on the runways.

“Diversifying categories is what makes a difference in hard times, but the fact is, in a suit you
feel more protected,” Zegna says. “The message you send out is that of safety and protection.”