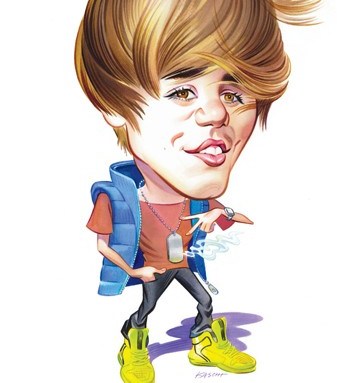 Get ready for another outbreak of Bieber Fever.

The teenage pop phenomenon Justin Bieber is bursting onto the celebrity fragrance scene, with a twist. Rather than introduce a traditional fragrance housed in a glass bottle, the 16-year-old tween and teen heartthrob has teamed up with the newly formed company Etoile Nation Beauty to introduce wristbands and dog tags infused with a unisex fragrance called My World. The scented accessories are slated to launch in Wal-Mart stores on Black Friday.

The unconventional approach is fitting for the pop star, who catapulted to fame after posting homemade videos of himself singing on YouTube. Bieber, who plays the drums, guitar, piano and trumpet, is learning the notes of the fragrance game, too. Before a concert Friday evening at Arco Arena in Sacramento, Calif., Bieber told WWD over instant message that he spent part of the day smelling different scents.

“They actually brought me a bunch of stuff to smell today,” he said. “One of them smelled too young, too fruity. One was really good.”

As for what type of scent he finds alluring on girls, Bieber said, “I actually like the Britney Spears perfume on girls. It smells good.”

While Bieber has lots of other products bearing his name, this is his first foray into the beauty arena. Could a hair care deal be far behind? Bieber gets a lot of attention for his locks — even New England Patriots quarterback Tom Brady has grown his own variation of it, which led Bieber to post a humorous rap about it on YouTube: “Sacked like a sacker. Call up Mr. Brady. Tell him to leave his hair to the guy who sings ‘Baby.’”

While Bieber, a Canadian native, wouldn’t talk about the rap, he describes his manicured mop as “a Canadian hockey thing.”

Styling is easy: shampoo, condition, blow dry, a shake of the head and “no product.”

But all those fans who covet every follicle of his mane should be warned: Bieber isn’t married to his signature look. “I’ve cut this style different ways, but I was thinking about shaving it off or changing it. But I know now isn’t the right time. Maybe [for my] next album.” (The shocked screeches of teenage girls can be heard throughout the land.)

As for fashion, he said he is a “big shoe guy,” adding that before his fame he couldn’t really afford a lot of pairs. “So, now I’m going nuts. Supras are my favorite. I just like finding shoes no one else has, exclusives. [I] love shoes. [They’re] kind of my thing.”

He’d like to design his own shoes, and is open to collaborating with a shoe company he likes.

So add designing to his To Do list, which currently includes singing and acting. In addition to juggling his concert tour, which he plans to extend into next year with some international stops, Bieber has a recurring role on “CSI: Crime Scene Investigation,” and is gearing up for the release of his 3-D documentary and concert film on Valentine’s Day called “Never Say Never.” He is said to be favored to be the host of MTV’s reprisal of the prank series “Punk’d,” and would like to do even more acting on the silver screen.

“I just like to try new things,” he said.

That includes on the musical front. Bieber plans to launch an acoustic album in December, along with another new album and tour sometime in 2011. “I want my fans to grow up with me. I just want to keep making good music,” he said. “Michael Jackson is an icon to me. I want to be a great entertainer like him.”

In the midst of it all, the teenager still has time to date, and admits that, just like any 16-year-old, he still sometimes gets nervous before asking a girl out. That’s about the only time, though. He doesn’t get many jitters when he is onstage, although he did get a touch nervous before performing for President Obama. The two did get to chat about basketball though. “He was really nice,” the diplomatic Bieber said.

The ongoing phenomenon of the pop star is the reason Etoile hooked up with him. As Michael Ferrara, president of Etoile, a company formed this fall, said, “This Justin Bieber juggernaut is never going to end. Justin is a total grassroots phenomenon.”

Bieber, his manager Scooter Braun and Universal Music Group, which owns Bieber’s record label Island Records, are partners in the new venture. The fragrance, named after the singer’s current tour, is embedded into a patented resin technology designed to hold the scent for at least one year.

“The resin delivers the scent in a way that is every bit as good as a juice,” said Ferrara, who prior to Etoile was a senior marketing executive at Coty Inc.

It’s also a way to ease Bieber’s young fans into the fragrance category. The promise of a Bieber-annointed scent is enough to prompt his followers to shed their Silly Bandz — which, incidentally, are available in Justin Bieber shapes — for good. The fragrance collection includes four designs: Icon, Energy, Tour and Web. They are priced at $10 each, and are meant to encourage girls — and boys — “to stack, mix and match, trade and take the scent on the go,” said Ferrara. “Fragrance will be as simple as switching from one dog tag to another.”

The scent has top notes of bergamot, lychee and pomegranate, a heartof cedar glimmers and a drydown of musk.

Wal-Mart, in partnership with Universal’s merchandising division Bravado, plans to stock the wristbands and dog tags in a dedicated display of Justin Bieber-themed goods for the holiday selling season. Etoile plans to expand the scented accessories to additional retailers, including specialty stores, next year. A traditional fragrance juice is likely at some point and Etoile hopes to be the licensee for that project as well, but a deal has not been signed.

“There couldn’t be more collaboration or support from Justin’s team,” said Ferrara, who attended two of Bieber’s concerts over the summer. At one show in Memphis, Ferrara spent nearly three hours with the pop star, even pulling aside groups of Bieber’s fans for impromptu focus groups with Braun.

“It was a great window for me to see a young artist rising,” said Ferrara.

The executive would not comment on sales projections for the fragrance, but industry sources said Bieber could power the new company’s revenue to $75 million within the first year.

Ferrara founded Etoile (or “star” in French) with Richard Blanch, who serves as chairman. Jerry Mastellon, who co-founded the cosmetics company Le Métier de Beauté with Blanch, serves as the executive vice president of operations of Etoile. The company plans to leverage Universal’s star stable, but will look outside the music world, as well, for celebrities to potentially sign, most likely to traditional fragrance licensing deals based on royalties.

Etoile plans to reveal its next celebrity deal within the next three or four months, said Ferrara.

Marketing efforts for Beiber’s My World collection will mirror the young heartthrob’s virtual path to stardom. In addition to leveraging Bieber’s digital and social media following, Etoile plans to shadow the pop star as he promotes his recently released book, “First Step 2 Forever: My Story,” doling out samples at book signings and upcoming talk and radio show appearances.

“Scooter decided to make Justin a viral phenomenon. We will take full advantage of this and build on his success,” said Ferrara, noting that the singer’s tweets — often up to a dozen a day — are followed by more than 5.7 million “Bieber Beliebers.”

But even for this 16-year-old YouTube sensation, there’s a first time for everything. On Friday evening, the night of the interview with WWD, Bieber tweeted, “I’m doing an interview with this lady over the computer. Kinda weird. But, she is cool.”