Deep in the heart of Kenya's used clothing market can be found Africa's plight, brought about by free trade and the global economy. 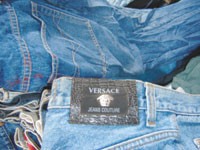 NAIROBI, Kenya — Gikomba is a vast market in the center of Nairobi where customers may buy live chickens, used kitchen appliances and almost anything in between — including used clothes.

Secondhand clothing is sold in the heart of the market. These are the charity castoffs initially donated to organizations such as the Salvation Army and Oxfam and intended for some of the world’s poorest countries, including Kenya, Uganda, Tanzania and Nigeria. The items, which may be resold, have made their way to Gikomba, creating problems for Kenya’s industry, which has suffered since global apparel and textile quotas ended on Jan. 1.

The challenges facing the Kenyan industry seem insurmountable. Once a star of the African Growth and Opportunity Act, the U.S. preferential-trade program intended to boost Africa’s nascent textile industry, the elimination of quotas and China’s emerging dominance have dealt the industry a severe blow. In 2003, there were 35 garment firms in the Kenya Export Processing Zone employing more than 36,000 people and exporting $1.3 million worth of apparel.

With no new orders from overseas customers, 5,000 jobs have been lost this year and the losses continue at a rate of 2,000 jobs a month. According to a memorandum from apparel manufacturers to Minister of Trade & Industry Mukhisa Kituyi: “The sector is concerned that five companies have already shut down, including Kenap, the first firm in Kenya to be accredited under AGOA. Many smaller factories are reportedly lying idle or operating at 50 percent or less capacity.”

The clothes at Gikomba are sorted according to type — denim, shirts, ties, underwear, jackets. The garments, known as mitumba, are compressed tightly into bales. Mitumba means bale in Swahili.

The bales each contain 60 to 100 pieces of clothing, depending on the item, weighing 20 to 50 kilograms, or 44 to 110 pounds. They are then sold to wholesalers and vendors, who display them haphazardly in their stalls — crumpled, unironed and unwashed.

“Everybody buys mitumba,” said Nick Musili, a limousine driver at one of Nairobi’s top hotels, The Stanley. “Look at the people walking in the street and you will see that everyone is wearing at least one piece of mitumba.”

This story first appeared in the June 7, 2005 issue of WWD. Subscribe Today.

He points to a man wearing a Chicago Bulls vest and a woman in a fleece jacket.

“For 1,000 bob [the vernacular for the local currency, Kenyan shillings, worth about $13 at current exchange rates], you can get a suit, a tie and a shirt,” he said. “You might even have money left over for shoes and socks. If you go to a store in town, you won’t even get a brand-new shirt.”

Not everyone goes to Gikomba market. Nairobi’s middle and upper classes, and expatriates, prefer the more easily navigable markets of Toi, Nyayo, Kagemi and Kibera. Some enterprising vendors buy in bulk from Gikomba and haul their merchandise to other Kenyan towns and cities such as Mombasa, Nakuru and Naivasha, selling them at prices as much as three or four times higher than in Nairobi.

A tour of the market last month revealed a hoard of name brands and designer labels. Justine Nzila, who concentrates on sportswear jackets, had Adidas ski jackets ($4) and Nike fleece hooded sweat tops ($3.35) piled on top of a bundle of similar items with labels such as Gap and Next for adults and children. Nzila said one bale cost her the equivalent of $87, which yields around 75 pieces. If she has a wholesale customer, she resells the bale for about $100. Otherwise, she offers each piece at retail for $2 to $5, though she may often start at $10 or more, expecting customers to bargain down the price.

Even at those prices, Joseph Gatonga said a seller can make a decent living. His specialty is jeans, and for a top-quality bale, which may include barely worn pairs of Calvin Klein, Miss Sixty, Levi’s 501 and Versace jeans, he can pay as much as $160. He then sells the jeans for about $5.35 to as much as $10 each. In a good month, such as December, Gatonga may earn more than $1,300, though he usually manages to average $200 to $270.

That is fairly decent revenue in a country with 32 million people and a yearly gross national per capita income of $390.

Like many vendors, Gatonga complained, “Prices have gone up because the government wants to kill us. Duty used to be [27 cents] per kilo. In January 2005, it was raised to [$1] per kilo.”

The mitumba phenomenon has become a significant feature of Kenyan life in the last 10 years.

Mercy Wingai, an office secretary, said with these used clothes she is sure of getting quality. “Locally manufactured clothes do not last and the quality is not as good,” Wingai said.

For the poor, the appeal is understandable, with bras, socks, boxer shorts and panties available for as little as 25 cents.

The entire textile supply chain is affected by the Kenyan population’s preference for mitumba clothing. Traditional Kenyan attire made from African-print kitenge fabric, fashioned into a loose tunic top for men and long dresses for women, retails for $18.70 and $24 — beyond the budgets of many ordinary Kenyans. Decreased demand for such clothing means less need for the fabric, which has contributed to a decline in cotton farming, weaving and spinning.

Jaswinder Bedi, chairman of the Kenyan Association of Manufacturers, textile and apparel sector, said, “Remember that these used clothes’ sole original purpose was to clothe the underprivileged, but the problem is this has become a big business … Instead of free distribution of secondhand clothing, it is a booming business negatively impacting the new clothes industry due to the price variation between both new and used, considering the shrinking buying power of the consumers. While Chinese goods are cheap in price, don’t forget used clothes are [duty-] free from the country of origin.”

Amos Kiguru, a purveyor of imported clothing, works in the stalls of Biahara Street in downtown Kenya selling new shirts made in Italy and Dockers men’s pants for $20. However, he admits to buying some of the clothes he wears at the mitumba markets.

“If you are like most Kenyans, earning an average wage of $13 per month, then you try to save what you can,” he said. “With the way the economy is right now, it’s not surprising how mitumba has beaten Kenya.”