As sales slump, men’s labels turn to the ath-leisure trend. 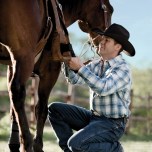 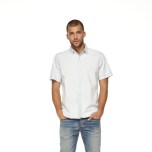 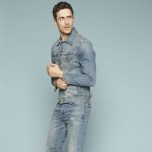 Men might be squeezing into slimmer-cut suits, but, when it comes to denim, it’s comfort they want.

That’s the key direction emerging in the denim market as brands rush to tap into the ath-leisure trend taking over everywhere, from the runways to retail. Companies also are hoping that injecting the trend into their collections will reverse the continuing slump in jeans sales, even though there were a plethora of denim looks on the men’s runways for spring.

For a recharge, Rebecca Duval, vice president equity analyst at BlueFin Research, says it is essential for denim brands to refocus their business models and research what today’s male customer wants.

“It’s not just a trend any more with this ath-leisure movement,” Duval said. “Men are now more choosy in what they are including into their closets and now want to find comfortable items.”

To suit this need, Duval suggests that brands should research how they can innovate with technical fabrics and fits, assess how and if their brand accommodates this comfort movement and consolidate styles.

“Instead of this democratic approach where all styles are for all people, these brands should really home in on their strongest looks and focus on those,” said Duval.

Kiya Babzani, owner of the Self Edge denim boutique and a consultant, said a “back to the basics” approach is needed for companies to find their consumers again.

“It’s a competitive market, and I think a lot of struggling denim companies need to look within…to lift [themselves] out of the funk,” he said.

Babzani said that, for years, larger brands have been seeking innovations by becoming derivative of smaller, younger brands.

“They were getting away with copying for such a long time,” he said. “They have tried everything: copying selvage, then Made in America and heritage styles. The thing about savvy, young customers is, they’re drawn to these cool stories, authentic brands and what they’re about. These big brands won’t ever have that cool factor, and now they’ve run out of things to reuse.”

Today, ath-leisure is another trend major brands are following, he said.

Ath-leisure is certainly a broad movement that most brands are chasing, as consumers are continuing to seek comfort and casual attire is gradually becoming accepted in more workplaces. In the past few months, jeans brands have embraced the jogger styles in hopes of recovering lost sales.

“We use and abuse the term ‘ath-leisure.’ Why are athletic brands like Under Armour doing so well? What can a denim company learn from that?” said Tim Conlin, men’s manager of Lee Jeans.

The Kansas City-based heritage brand has been responding to various focus groups hosted around the country. “They want comfort — it’s nothing new,” he said. “When it comes down to it, we’re unlocking the comfort equation, which, for us, is stretch.”

The company has introduced its new Active Comfort Denim, which will be a focus for the brand for spring 2015.

“Not only has that product given us a new voice in the marketplace, it’s tagging on the heels of this athletic comfort. What we’re working on now is a lot of newness for the next six to 12 months. Going forward, the next evolution is drafting more of the ath-leisure side of it,” said Conlin.

Other heritage brands, such as Wrangler, are following suit.

“You know, as a brand, our tag line is ‘Real Comfortable Jeans,’ ” said Gloria Lee-Cook, merchandising manager of Wrangler. “It’s all about ath-leisure right now, but it’s always been a part of our foundation.”

The company will introduce its Advanced Comfort line, which features four-way flex and added stretch for “unmatched comfort,” Lee-Cook said. The brand has been researching the new line since late 2012 and recently conducted a soft launch in test stores.

Hudson Jeans sees a very promising market within the ath-leisure space, according to its director of merchandising and design, Stephanie Davis.

“We are onboard with the whole ath-leisure correlations,” she said. “I think people are looking for comfort over the years and superstretch, and, in our men’s, we are taking a tune from the women’s side.”

For spring, Hudson will launch a new fit called the Elliott, an athletic khaki pant with a drawstring waistband. The brand began expanding into other categories and launched cargos and banded bottoms.

“We’re giving our customers technological fabrics, like a dry-wicking element, while acknowledging it needs to be functional and fashionable,” Davis said.

But some brands, such as the three-year-old 3×1, aren’t too convinced about fully embracing the trend.

“I think, overall, the ath-leisure trend is mainly that — a trend,” said Scott Morrison, the brand’s founder. Morrison said he wouldn’t be adopting the ath-leisure trend at all. Instead, more than ever, the brand is focusing on denim fabrics and fit. “To tell you candidly, we’re not changing that much, and we’ve seen four times more sales than last year,” he said.

“Men are more into buying stretch than ever before,” Morrison added. “They’re buying that, and we are building styles around that guy.”

Morrison said the brand offers a treatment and also adds silicone softeners with a brushed-back finish that results in what he described as a “peach-soft hand.”

The cofounder of Earnest Sewn and Paper Denim, Morrison said it’s his retail concept shop in New York’s SoHo that has allowed the brand to grow. “We’re doing what we do best, focusing on jeans and being obsessed with attention to detail,” he said.

Lucky Brand Jeans, acquired by Leonard Green & Partners in December 2013, said the company would be capitalizing on what the brand is best known for: its slim, straight and relaxed fits. “We’re investing in better quality and finding that in Italian fabrics,” said Josh Weiner, Lucky Brand Jeans’ vice president of men’s merchandising, planning and allocation.

“I think denim is always the foundation of American style, and we ebb and flow from it,” he said. “It goes clean, straight, and nothing is cooler or more effortless than denim.”

To lure customers back, Weiner said the brand is betting on new luxe fabrics sold at a competitive price point.

The company, Weiner said, would stay true to its Los Angeles roots and continue to expand in finding better fits to entice customers. “We want to make it effortless for the guy who is dressing a little more tailored,” he said.

Another quintessential Los Angeles denim brand, True Religion, is delving back into its archives to find inspiration.

“We’ve found resurrected things in our archives and know that it’s all about construction for our customer,” said Gary Harvey, creative director of the brand.

Harvey, who recently joined True Religion, said he was looking into ways to reinvent the sewing machine and retool the brand’s extra-large signature stitching. Instead of veering too far from what the brand is known for, Harvey said the company would focus on its bestsellers: the Dean, a drop-crotch silhouette, and the straight fit, Ricky.

“I don’t think True Religion has lost our past customers,” he said. “We have comfort within us, but it’s dressed up enough for the club, a bar or a cool dinner.”

Though denim brands each have a differing opinion on which direction is best, they need to be cautious in their approach, said Duval.

“We are seeing that there’s even more potential for a drop in sales, especially as this trend continues,” she said. “But, in the long run, I don’t think [joggers] will replace indigo completely. Brands need to continue figuring out what is necessary to entice their former customers back, keep their current [ones] and lure new business.”

But with a strong resurgence of denim looks on the men’s runways for spring —many styled head-to-toe in the indigo fabric — from houses such as Yohji Yamamoto, Kenzo and Junya Watanabe to Prada and Saint Laurent, there is potential for what Duval says is a “trickle-down” effect.

“It always takes a couple of seasons for this to get to the masses, but it’s definitely an area of potential. There will be some traction again for the denim industry, but will it ever get back to the sales it once had? I’m not sure,” she said.

Babzani said runway denim trends have only a small effect on the overarching industry.

“The runway shows are so far removed from these denim brands,” he said. “If you’re talking about the Canadian Tuxedo look, it’s been done before by all major fashion houses, from Versace, Chanel, Gucci — everyone. It’s just happening again, and I don’t think it’s going to have a large effect at all.”

Babzani agreed that a new, well-thought-out approach was necessary for the survival of brands, though he said he has found those plans to be underwhelming.

“If you’re not cool any more, you’ll never be again,” he said. “Brands need to find new ways to bring back customers and excite them again, or they don’t have a chance.”