Kérastase is venturing into the men’s market with the hair care line Kérastase Homme Capital Force. 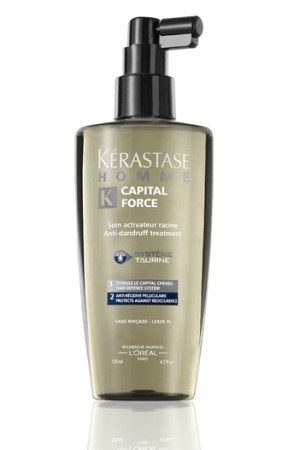 PARIS — Kérastase is venturing into the men’s market with Kérastase Homme Capital Force.

This story first appeared in the April 16, 2010 issue of WWD. Subscribe Today.

The L’Oréal-owned brand focused on creating a line that responds to problems specific to men, explained Céleste Grossgold, international marketing director for Kérastase.

For at-home use, the Capital Force line comprises three product duos — a daily treatment shampoo and a leave-in lotion — with targeted claims, such as “densifying,” “anti-dandruff” and “anti-oiliness.” Their formulations work on a hair’s root and on its fiber.

The products’ key ingredient is the “taurine system” conceived by L’Oréal Advanced Research Laboratories and billed to stimulate the hair mechanism and slow down hair loss.

To combat hormonal causes of hair loss, Capital Force products contain combinations of taurine and D-Biotin plus ceramide and argenine. With the aim of blocking secondary factors contributing to hair loss, the anti-dandruff products include piroctone and olamine; the anti-oiliness products have a derivative of an amino acid, and the thickening products incorporate a styling polymer, according to the company.

For salons, a Capital Force serum (in unidose format) was developed to be used in an especially created “energizing” massage. (In France, the 12-minute treatment costs $20.35 at current exchange rates.)

The Capital Force brand is due to hit U.S. shelves in September. It has been introduced in France and some other markets, including Denmark, Belgium, the Netherlands, Greece and Turkey. The full worldwide rollout is scheduled for this year.