Recent upheavals in the economy and accelerating fashion cycles are among the reasons why denim companies are bringing production closer to home. 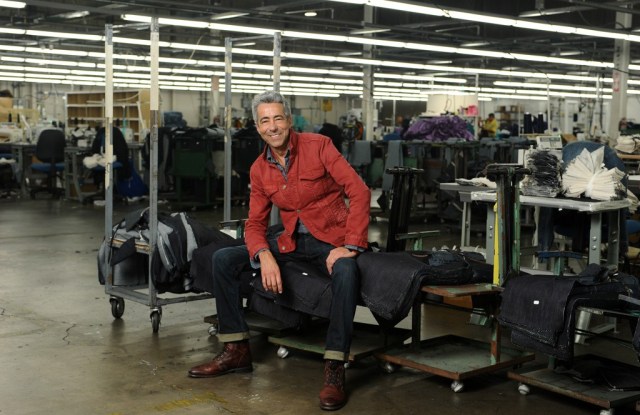 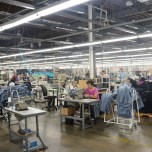 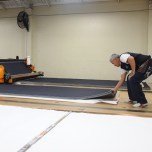 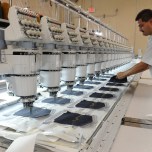 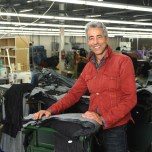 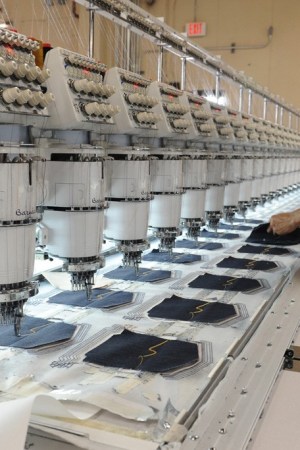 Seven For All Mankind started doing its own back-pocket embroidery in its facilities last December.

VERNON, Calif. — For his first job ever in the premium denim industry, Seven For All Mankind president Barry Miguel is turning into a garmento. A month after joining the VF Corp.-owned brand, the former Tracy Reese and Zac Posen executive hired almost 50 sewers to make jeans at Seven’s 220,000-square-foot headquarters here. The sewing operation follows the addition of denim cutting, embroidery and finishing, which are all part of Seven’s efforts to make its own jeans without relying on outside contractors.

“Two years ago, we started planning [for] internalizing our manufacturing,” Miguel said, as he took a short walk from the design room, past shelves of colorful thread spindles with names like “Aztec” and “praline pink,” to the sewing area. “One [factor] was controlling our destiny, having more control of our process. There was some cost advantage. The other was speed to market. In today’s world, we need to be quicker.”

Seven isn’t the first denim brand to handle its production in-house. Koos Manufacturing has invested hundreds of thousands of dollars to buy laser machines and ozone generators for its 400,000-square-foot factory in South Gate, Calif., where it designs and makes jeans for its labels AG Adriano Goldschmied and Big Star. Citizens of Humanity produces more than 1 million pairs of jeans annually at its own laundry facility in Huntington Park, Calif. J Brand shares space in its Los Angeles headquarters with a 300-person factory that operates as a separate entity but makes jeans exclusively for J Brand.

With recent upheavals in the economy — ranging from faster speed to market to retailers’ antipathy toward holding inventory — denim companies like Seven have been bringing production closer to home in the past year. If they’re not overseeing manufacturing under their own roof, then they’re migrating certain processes to Los Angeles-based contractors from overseas facilities.

As a result, denim apparel imports to the U.S. fell to 46.3 million dozens for the year ended Aug. 31 from 52 million dozens a year ago, according to the Commerce Department’s Office of Textiles and Apparel, and the value of those imports declined 2.9 percent to $4.19 billion from $4.32 billion in the prior year. In September, the number of apparel manufacturing workers in Los Angeles County increased 7.1 percent to 51,500 from 48,100 a year ago, the Los Angeles County Economic Development Corp. reported. The manufacturing numbers could increase pending the passage of a recently submitted bill in California’s state senate to provide a tax credit on the purchase of machinery and equipment for manufacturers.

“Labor here in the U.S. is becoming more attractive than [it is] overseas,” said Marc Crossman, president and chief executive officer of Joe’s Jeans in City of Commerce, Calif.

Los Angeles, in particular, excels in two areas, Crossman said. Simple rinses and dyeing aren’t too expensive to do so the U.S. can compete on price with foreign markets. Plus, the domestic washhouses lead the industry in creating advanced treatments for novelty fashion. Since the beginning of the year, Joe’s has been shifting its production to the U.S., which is now the source of 40 percent of its output.

“At one point, we were only 10 percent,” Crossman said. “We’ve seen that’s swung back to the U.S. with the difficult washes and treatments.”

Caius Olowu, designer of 020608 Tears of Bleu, made the switch to American washhouses from Japanese facilities a year ago. Living in both Los Angeles and Japan, he cuts and sews his products in Okiyama, Japan, and then washes them in Los Angeles before shipping them back to Japan to sell. Top-tier Japanese stores including Isetan, Royal Flash and B 2nd refused to pick up his tailored jeans that retail for between $286 and $336 until he started washing them in the U.S.

“My Japanese accounts didn’t want something made in Japan,” he said. “They wanted a product that was different and came from abroad.”

Retailers’ demand for quicker speed to market is another motive for producing domestically.

Peter Kim, president of Hudson Jeans, also based in City of Commerce, said that a year ago he could take eight to 12 weeks to produce and ship a new style and between six to eight weeks to fill a reorder. Nowadays, he needs to deliver new styles in six to eight weeks and fulfill reorders in two to six weeks.

While Hudson handles its own patternmaking and fits for every style, it outsources other operations, including the warehouse that stores its fabrics and finished goods. When the company was started nine years ago, it had handled some of the dry treatments, such as grinding on the jeans, in-house before deciding to outsource them.

“What we’re realizing is, it’s much better to partner up with the right people that are the best in their field and use their expertise because it’s constantly evolving,” Kim said, noting that all the contractors that handle cutting, sewing and washes for Hudson are located within a 10-mile radius of its office. “To bring the whole thing in-house, we could shave off more time. But it’s like running 10 or 12 other businesses at the same time.”

The concentration of businesses specializing in denim in L.A. appealed to Marcus Hall, a first-time designer of a new men’s denim label called Marc Nelson. Hailing from Knoxville, Tenn., Hall went from selling men’s jeans at Macy’s and Saks Fifth Avenue to launching an industrial-inspired line for next spring through a friend’s introduction to a seasoned sales rep named Alyson Pryor. Having worked at Fred Segal for 15 years, Pryor introduced Hall to Todd Tourso, a graphic designer who is dating Kova & T co-founder Christina Tang. Then Tang connected Hall to Tara Graves, the head of HCD Denim, a washhouse and sewing facility that is making jeans for Marc Nelson. Prior to coming to L.A., Hall wasted three months in Atlanta just trying to find someone to do the processing.

“Everything I needed was right there in Los Angeles,” Hall said. “The fashion community is so tight-knit. There’s someone who knows everyone.”

Seven took advantage of VF’s expertise in manufacturing to set up shop. Of its 365 employees here, 55 work on finishing and 47 on sewing. In addition to its headquarters, it has a neighboring 48,000-square-foot building where it stores the fabric and does the cutting and embroidery. It does anywhere from 25 to 95 percent of the processes in-house. It plans to double its embroidery and sewing operations over the next two years. Declining to say how much money it’s saving by doing production in-house, it acknowledged that it’s not reducing costs enough to lower prices.

“If we’re able to maintain or not raise prices quickly, that’s an advantage,” Miguel said. “Hopefully, the retailers will see us being able to respond more quickly. As long as we’re part of the contemporary fashion world, we need to be nimble, we need to be able to move.”

Time is the key factor. Seven trims two weeks off its production schedule by doing cutting, embroidery and sewing in-house. It saves two days through handling the finishing, which entails adding tags, snipping off stray threads and pressing the jeans.

“Historically, it’s a long process to market [for apparel],” Miguel said. “You don’t have that luxury of a year to market. The consumer and the economy can be in a different place in that year. If you’re out too far, you can miss something.”