Lab Series Skincare for Men is amping up its profile and hopes to grow sales by 50 percent to an estimated $100 million at retail in the next three years. 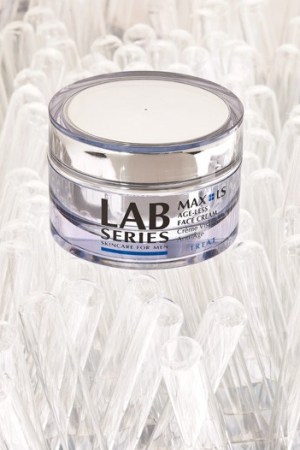 Lab Series Skincare for Men is amping up its profile and, in the process, hopes to grow sales by 50 percent to an estimated $100 million at retail in the next three years, according to industry sources. The brand has already begun the push with a new Web site and a pop-up shop that’s scheduled to open next week.

Also, the Estée Lauder Cos. Inc.-owned brand will introduce a high-tech antiaging product called Max LS Age-less Face Cream in the first quarter of next year.

With Max LS, Lab Series is aiming to appeal to an older demographic than its median target, the 32-year-old male.

“Max LS targets a slightly more mature consumer,” said Veronique Gabai-Pinsky, global president of Aramis and Designer Fragrances, BeautyBank and IdeaBank at Estée Lauder. She added that the Max LS target consumer is more interested in repairing the skin as opposed to preventing the appearance of aging.

Existing Lab Series products under the Age Rescue moniker are geared more toward prevention, according to brand executives.

Max LS features sirtuin technology that’s designed to activate an enzyme of the same name, which is said to prolong the life of skin cells, repair damaged cells and help slow down the rate at which the skin appears to age, executives said.

“We met a year and a half ago and asked, ‘Where do we take the brand so that it’s more upscale?’” said Diana Espino Gitlin, vice president and general manager of Lab Series Skincare for Men. “Sirtuin technology is where we wanted to go.”

“Lab Series has been continuously trying to improve on its brand positioning,” said Gabai-Pinsky. “It’s an important brand in our portfolio.”

Espino Gitlin said clinical testing of Max LS showed a 71 percent improvement in immediate hydration and that skin looked 21 percent more lifted, 20 percent firmer and 26 percent smoother after four weeks. She added that after eight weeks, lines and wrinkles were reduced in appearance by 42 percent.

Max LS is slated to be launched in February at 1,600 stores, including Bloomingdale’s, Macy’s and Nordstrom locations.

The item will be priced at $65 for 1.7 oz., and industry sources estimate the product could do upward of $9 million in first-year retail sales globally. Key markets for Lab Series include the U.S. (where it has an 18 percent share in men’s skin care, according to executives), Korea and Japan.

On the Web front, the brand has relaunched labseries.com, which was completely overhauled and went live on Sept. 30. The initiative was designed to make navigating and shopping the site easier, according to Espino Gitlin, who noted the site is Lab Series’ number-one door globally and that there has been a 50 percent increase in traffic since the relaunch.

The site features a new column called “Lab Insider” by Richard Sawyer, spokesman and international education director for Lab Series Skincare for Men, in which he answers questions and gives grooming tips.

Additionally, there are video testimonials on the site and, each month, a new promotion will be highlighted on the home page. Another highlight of the site is a diagnostic tool designed to prescribe a skin care regimen in two steps. First, the tool allows users to choose their skin type, then skin concerns can be selected. The resulting page displays a product regimen recommended based on the information that was input.

Future plans for the site include automatic shipments based on customers’ buying patterns and a live chat with Sawyer.

“It greatly simplifies communication,” Gabai-Pinsky said of the site. “The technology allows us to have direct contact with men.”

As for the pop-up shop, which will be located at 43 East 42nd Street in Manhattan, Lab Series has scheduled a press unveiling on Wednesday and plans to open the shop for business from Thursday through Saturday. The 5,500-square-foot space will be open from 7 a.m. to 7 p.m. and will feature different stations for facials, hair services, shoe shines, nail buffing and a testing bar.

“It’s great to have a different type of connection with our consumer,” said Gabai-Pinsky. Citing the combination of Lab Series’ in-store presence and the new Web site, she added, “It’s a way for us to amplify the message of the brand.”