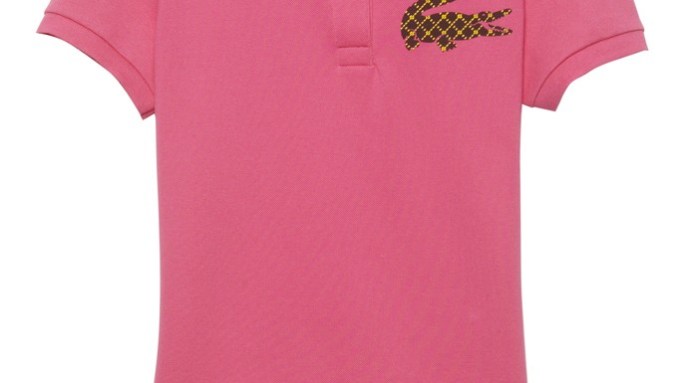 Jonathan Adler, who’s been collecting Lacoste polo shirts since he was a child and was selected as the brand’s guest designer this year, has reimagined the iconic polo as part of the company’s Holiday Collector’s Series.

A home furnishings and interior designer known for his whimsical style, Adler took the iconic Lacoste logo and overlaid some of his favorite patterns and colors from his own needlepoint pillows — an obsession he’s had for years.

The Special Edition Polo, which retails for $150, features an oversize crocodile logo in the pattern with matching sporty side stripes and bottom that uses a rubber-flocked printed technique that replicates the look and feel of needlepoint but without additional weight. The shirt comes in five colors for men and four for women. It is packaged in an actual needlepoint pillowcase with a large white crocodile against blue and navy diagonal stripes.

“I spent many years throwing pots in my studio in a clay-spattered Lacoste. I always loved the sportif vibe and – hello! – the gorgeous colors have inspired my work,” said Adler, whose personal wardrobe includes about 100 Lacoste shirts. “The country club chic vibe of Lacoste has inspired lots of my needlepoint designs. When they selected me to be this year’s collaborating artist I felt like it was pre-ordained. I am over the moon.”

The Limited Edition Polo, which sells for $250, has the same sporty crocodile logo and stripes motif but is needlepointed. With two colors for men and two for women, the style is limited to 1,212 pieces for each gender. Each comes in a color coordinated tennis racquet cover with a needlepointed crocodile head and Adler motif.

The Special Edition and Limited Edition polos will be sold at Lacoste boutiques and lacoste.com, as well as Nordstrom and Neiman Marcus, beginning Nov. 1. Scoop and Ron Herman will also sell the Special Edition Polo.

Adler also designed a few polos that were more conceptual and not quite as wearable. These polos are completely made of needlepoint hand done by French nuns and packaged in ceramic crocodiles. Prices haven’t been set yet.

Adler and Lacoste will mark their collaboration at a party Saturday at The Estate in Sag Harbor.