The brand is going after the edgy, creative urban set with its latest scent, Live. 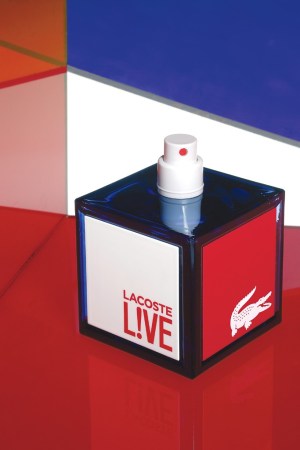 PARIS — Lacoste is going after the edgy, creative urban set with its latest men’s scent, Live.

The global introduction capitalizes on the success of the L.12.12 collection for men, which made its debut in 2011 and gleaned inspiration from Lacoste’s iconic polo shirt, he said.

The idea was “also to build on the positive momentum of the Live fashion business,” Delgrange continued, referring to the Lacoste subbrand that was launched in 2010 to target a younger, more contemporary customer than its core sportswear collection.

“We worked from the start very closely with the fashion house,” said Delgrange. “The whole idea is to play with perspective.”

The Live bottle takes the shape of a cube and sports the colors blue, white, red and black, even listing them as ingredients (think “32 percent intense blue” and “10 percent pure red,” for instance). Here, the Lacoste crocodile logo takes a whitish hue.

P&G’s fragrance design team and Lacoste jointly created the juice. There’s a lime note in its top, green leaves and aquatic notes in the heart, and guaiac wood and licorice notes in the base.

“Licorice is what makes this special twist,” said Delgrange.

The Live concept, he explained, is about being alive and full of energy.

“The overall idea is to live with a different angle,” said Delgrange.

As such, the brief for the campaign — directed by H5 and coordinated by Grey Advertising — was to “break the category codes and play with this perspective, this optical illusion,” he added.

Starring in the 20-second video destined for TV is the French graffiti artist known as Zoer and another man, who color, paint and tape the walls of a white loft space. Once done, the camera takes a new vantage point, revealing that their work has morphed to make a 3-D Live bottle. The ad’s tag line is: “New fragrance. New perspective.”

A large focus of the scent’s campaign is to be on digital, including an Instagram presence, where people’s own content playing with perspective can be posted with the hashtag #newperspective.

“The whole idea will then be to reward the best piece of art with some prizes,” said Delgrange.

The Live optical illusion theme will be brought in-store, too, with cubic effects.

P&G executives would not discuss projections, but industry sources estimate Live will generate between $160 million and $175 million in first-year retail sales worldwide.

The scent will first be introduced in the U.K. during the last week of April, followed by the Middle East, Africa, the Nordic zone and Spain in May; France and Portugal in June; greater Europe in July; North America, South Africa and Russia in August; Latin America in September, and the Asia-Pacific region in November.