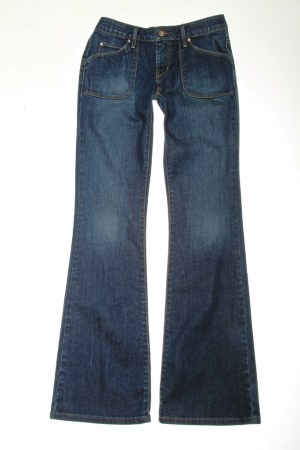 Although in small quantities, and with no fanfare, this initial step is regarded by BCI corporate members as a clear example that cotton worldwide can eventually be raised with more environmentally sound practices and labor standards.

The first apparel companies and retailers to sell Better Cotton products are Levi Strauss and Co., the Adidas Group, H&M and Marks & Spencer, which have made commitments to introduce the fiber to the marketplace as participants in BCI’s Fast Track Program. Ikea, the home furnishings retailer, is also part of this group to create Better Cotton demand.

“It really is a big goal and big vision to change the way cotton is grown,” said Michael Kobori, Levi’s vice president of social and environmental sustainability and the chairman of the Geneva-based BCI, a consortium of farmers, gin operators, traders, textile mills, consumer brands, retailers and nonprofits.

San Francisco-based Levi’s today will reveal that it will start selling two million pairs of Levi’s and Denizen brand men’s and women’s jeans containing a blend of Better Cotton and cotton from mainstream sources.

The first BCI cotton for the 2010-11 crop year was harvested from some 68,000 small farms in India, Pakistan and Mali. The farmers are using sustainable agricultural methods with fewer pesticides and less fertilizer and water to reduce the environmental impact, while increasing crop yields and profits. They are also adhering to worker labor standards.

Because Better Cotton’s quality and prices are indistinguishable from mainstream cotton, Levi’s, as well as the other BCI-member companies, aren’t labeling products containing the fiber. The reason: to avoid a spike in demand for the currently limited quantities that could create a shortage and higher prices along the supply chain. The idea is to make Better Cotton the new commodity cotton.

“We want to be very patient about it and grow [Better Cotton] over time,” Kobori said. “The key to that is ensuring the price remains affordable.”

For the first crop year 2010-11, the yield of BCI cotton was 38,000 metric tons, in contrast to the 27 million metric tons of all cotton raised worldwide, according to the International Cotton Advisory Committee.

For the 2011-12 cotton season, the Better Cotton yield is expected to be 70,000 metric tons from some 150,000 farms participating, with the addition of the West and Central African nations of Benin, Burkina Faso, Cameroon, Senegal and Togo.

By 2015, BCI’s aim is for one million farmers to harvest 1 million metric tons. This year, farms in Brazil were added to the program and BCI is now working to include China.

“We believe we are getting closer and closer to that tipping point where [Better Cotton] will be very much a desired commodity and more brands and retailers will be procuring it,” Kobori said.

The Adidas Group this summer began selling apparel containing a blend of Better Cotton and mainstream cotton. The athleticwear company “is committed to using 100 percent Better Cotton by 2018,” said a spokeswoman for the German sports apparel company.

Swedish fast-fashion retailer H&M began offering Better Cotton apparel this fall. The company has a 2020 goal to carry cotton products only from sustainable sources — Better Cotton, as well as organic and recycled cotton, according to a company spokeswoman.

Marks & Spencer has started incorporating Better Cotton in a range of men’s, women’s and children’s apparel, as well as home furnishings. “Customers can shop M&S with every confidence that we are taking a responsible approach to how cotton is sourced,” stated Mark Sumner, M&S cotton specialist. The retailer has a goal of 2020 to carry products produced with sustainable means across all categories.

It’s foreseeable that within 50 years, cotton farmers worldwide could be adhering to BCI or similar sustainable-farming standards, said Terry Townsend, ICAC executive director, who makes a distinction between a larger potential market for Better Cotton and that of organically grown and Fair Trade cotton.

In contrast, organic and Fair Trade cottons hew to rules for farming and handling throughout the supply chain that are applied across the board that by their nature have resulted in higher costs and prices. These have contributed to slower market growth.

As an aside, Townsend said cotton farmers worldwide have been reducing pesticide use, as the result of better knowledge about their application and the advent of biotechnology creating more pest-resistant cotton. Worldwide, cotton accounts for 6.8 percent of all pesticide sales, down from 15 percent 22 years ago, he said.

While commending Better Cotton’s goals, J. Berrye Worsham, president and chief executive officer of Cotton Incorporated, the research and promotional arm of the U.S. cotton industry, cited challenges facing the Better Cotton program, such as “costs, manpower required and traceability” through the supply chain. Cotton Inc. is a BCI member.

“The U.S. cotton industry will continue to work with the Better Cotton Initiative to more effectively identify cottons that are produced sustainably, which ultimately will increase the supply of BCI cotton and minimize costs in the supply chain,” Worsham said.