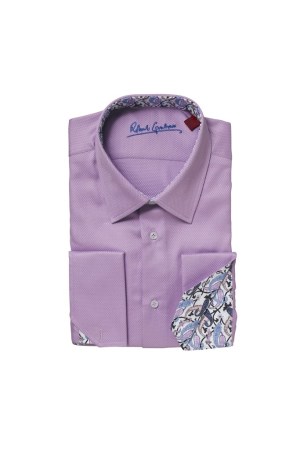 Building on its core business of bold sport shirts, Robert Graham has developed a wide-ranging collection of offerings, including eight licensed categories, six of which are currently in the marketplace and two that are set to hit retail in the spring and fall of next year.

“At the end of the day, we are looking to build a full collection of product and we can’t go into all these categories ourselves,” said Michael Buckley, chief executive officer of Robert Graham. “Licensing is an important part of our business as it is a significant source of income.”

The six licenses that are available at retail are dress shirts with Shirt Avenue/Classico Inc.; neckwear with PVH Corp.; hats, scarves and gloves with Paramount Apparel; cuff links with Cufflinks.com; hosiery with British Apparel Group, and belts with RGA Leatherworks. (American Belt Co. was the brand’s belt license through fall 2011, with RGA Leatherworks taking over the license for this spring.)

The company’s newest licenses are tailored clothing with HMX Group and denim with International Denim Group. The tailored clothing will be available at retail in fall 2012, while denim will officially launch in the spring. However, select accounts will receive early shipments of denim at the end of November, including Nordstrom, Neiman Marcus, Saks Fifth Avenue, E Street Denim and Post Blue Jean.

“These are the most detailed dress shirts on the market,” said Joseph Paknoush, president and ceo of Classico. “There are embroideries on the inside placket, cuff and the interior collar band, as well as colored button holes on some shirts.”

Top accounts for the category include major chains like Neiman Marcus, Nordstrom and Saks Fifth Avenue, as well as better specialty stores including Boyds, Patrick James and Garmany. In total, the dress shirts are in 400 doors in the U.S. and retail for $158 to $248.

A signature on the shirts is a snap button used for the bottom button. Color, always an important aspect of the Robert Graham brand, is used liberally for solid styles in blues, lavenders, purples, pinks, yellow, orange and green, said Paknoush. Fancies come in colored sateen stripes and tone-on-tone jacquard patterns. All the fabrics used in the dress shirt line are exclusive to Robert Graham.

Sales of dress shirts are up 20 percent this year from 2010, according to Paknoush. There are usually about 50 stockkeeping units per season in the dress shirt offerings.

The new jeans license was finalized in June. “The brand has had incredible success over the past 10 years and premium denim was one of the biggest untapped opportunities,” said Gary Sims, president of International Denim Group, the new Los Angeles-based company created specifically to operate the Robert Graham denim business. “The Robert Graham customer is a heavy user of premium denim. We’ve been sending him to a lot of other great brands over the years for jeans and now we’re going to give him the opportunity to buy his favorite brand.”

The jeans retail from $188 to $318 with four fits and 10 washes in the first season. The jeans are produced in a dedicated factory in Bangladesh that only makes Robert Graham product, with the owner of the factory a partner in International Denim Group. Other partners in the company include Sims, who was previously president of wholesale for William Rast and J. Lindeberg USA, and a small group of other experts from the denim arena who prefer to remain anonymous.

The tailored clothing license with HMX Group was brokered by Bill Sweedler, the co-founder of Tengram Capital Partners, which in June made a significant investment in Robert Graham. “We are combining our North American manufacturing capabilities with the personality of the Robert Graham brand,” said Doug Williams, ceo of HMX Group, which will make the suits in its Ontario, Canada production facility.

The designs are still in development, but Williams said the suits will have Robert Graham prints incorporated into linings and the under collars of jackets, along with novel uses of color for button holes. “We’re taking a conservative garment and giving it some pop — but it’s not going to scare a guy away from wearing it to the office. It’ll be suitable for a business environment,” noted Williams.

There will be two price tiers of suits, with the Robert Graham label starting at $995 and a more upscale Robert Graham Collection line starting at $1,495, with each label targeted at the brand’s various levels of distribution. Williams said he believes the business could eventually reach $20 million in sales annually.

PVH has held the Robert Graham neckwear license for three years, distributing ties, pocket squares and bow ties under the brand in 200 doors, including Saks Fifth Avenue, Neiman Marcus and Nordstrom. “Robert Graham is all about color and movement. We come out with new styles each quarter to keep it looking new and fresh,” said David Sirkin, executive vice president of PVH’s neckwear group, who added the business does best on the coasts.

The color and prints that Robert Graham is known for have been a boon for Paramount Apparel, which makes hats, scarves and gloves. “We’ve been using amazing European silk fabrics for both the inside and outside of hats,” pointed out Robert Marcus, national sales manager of licensed brands at the Bourbon, Mo.-based company. “With gloves, we use linings in colors that are very different than what the market has historically used — for black leather gloves, we’ll use green and red cashmere. It’s a real point of differentiation.”