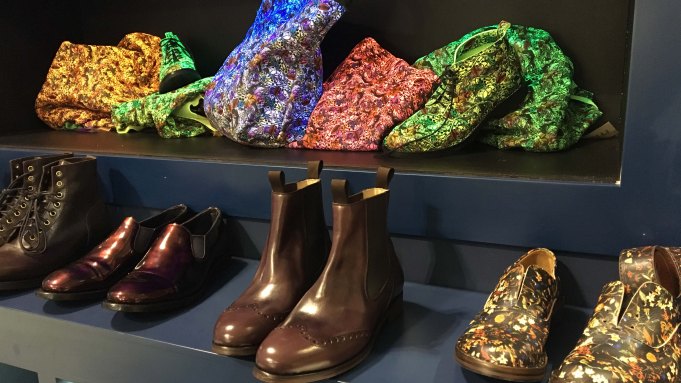 While brands like Gucci, Giorgio Armani and Prada were parading at Milan Fashion Week, the leather trade show Lineapelle was taking place at Fiera Milano Rho Sept. 20 to 22. Italian and international tanneries tried to get the most out of this fair, which seemed to be especially important given the difficult economy.

The value of the Italian tanning industry production fell to 5.2 billion euros, or $ 5.83 billion at current exchange, down 2 percent compared with the previous year. Nevertheless, Italy is still a dominant player, globally, according to Graziano Balducci, president both of Lineapelle and Antiba, a Tuscany-based tannery. The Italian leather industry represents 65 percent of European production and 19 percent of world production, which has $115 billion in annual volume on a global scale.

Exports account for 77 percent of national revenues, totaling four billion euros, or $4.5 billion. And despite the slowdown in luxury, companies remain confident about a turnaround in the next months. “We have seen an increase in the number of visitors, both from Italy and abroad,” Balducci said, and the hope is to close this year at the same levels of 2015.

Focusing on sustainability while producing highly resistant leather is one more challenge tanneries have been working on these past few  years: respecting the environment is a plus, but more important is a 100 percent performing leather.

During the three-day fair, the focus was on fall 2017 trends in leather and leather accessories. The thread running through all the collections was the search for new tactile experiences, well represented by the “Sensorium” area staged throughout the fair pavilions. Softness and lightness were essential, but the new products were also bright, featuring relief prints that created unexpected effects.

Colorful pony skin and handmade python items stood out from Tuscan tannery Dolmen. “As we produce high-level leather, our only clients are fashion firms,” said Luca Giananti, one of the five partners of the company. “This is why we are suffering from the slowdown in the luxury sector.” Last year, Dolmen sales fell around 7 percent to 42 million euros, or $47.3 million, compared with 2014. According to Giananti, the key is not to give up, and to continue to invest in innovation, even if “we have to keep the costs low.” Dolmen’s focus is on patent leather and shiny product, to respond to a market demand.

Ecopell 2000 went further, showcasing glow bags and shoes made of particular color pigments, which had a glowing effect under a neon light. Alessandra Giannoni, director of the company based near Pisa, underscored that glow items are part of a small collection, but shiny and embossed leather are the most requested categories. “We sell a lot in Europe, Portugal and Spain above all, and also in Asia, mainly China and Vietnam,” she said. “In the Americas, the U.S. and the Mexican markets are the top performing.”

Gruppo Mastrotto, which has sales of 450 million euros, or more than $500 million, and is based in a leather district near Vicenza, in the northeastern Italy, offered a wide range of product. At the beginning of this year, the company was recognized as the most important global leather supplier by Coach, the American leather accessories group. Exports represent 80 percent of Gruppo Mastrotto’s production, including the fashion market as well as design and automotive. Audi, Volkswagen and Toyota are among its well-known nonfashion clients.

Shiny colors and natural polished leather were the highlights of Mastrotto’s collection, which also includes different types of leather specifically for the fashion market, which can be combined to match shoes, dresses and bags. “The new trend is using bright colors, even in the winter collection for a spring color effect,” said Chiara Mastrotto, president of the group.

Python skins marked by geometric designs were presented by Dimar, founded some 40 years ago near Vicenza and still run by the Franchetti family. Laminated items with a worn effect is another trend that the company believes will have a knock-on effect.

Gruppo Mastrotto concurs on the trend, believing there will always be a high demand for vintage-looking leather. Dimar’s best performing market are the U.S., followed by China and Hong Kong.

The fashion, watch and shoe industries are the main areas served by Tuscany-based Caravel. “As a subsidiary of Kering Group, Caravel has a vocation to serve our sister companies, from Gucci to Saint Laurent, as well as other major international brands,” said chief executive officer Jean Marie Gigante. “So our key markets are Europe and the U.S.”

Lineapelle is still a must-go show, added Gigante, to present the collections, “to meet companies’ executives and to network.”

The next edition of Lineapelle will run Feb. 21 to 23 at Fiera Milano Rho. Prior to that, Lineapelle London will feature a preview at the Ham Yard Hotel in January, while the Metropolitan Pavilion in Manhattan will be the stage for Lineapelle New York, Feb. 1 and 2.