Lineapiu celebrated its 30th anniversary at Pitti Filati last week with an exhibition of designer garments woven with its yarns. 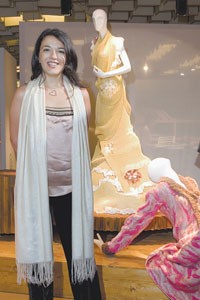 FLORENCE — Lineapiù celebrated its 30th anniversary at Pitti Filati last week with an exhibition of designer garments woven with its yarns.

The company presented 70 outfits, all created from Lineapiù yarn, taken from the archives of designers including Chanel, Missoni, Valentino and Giorgio Armani. The exhibition, “Yarn Makes History,” is running at the Galleria del Costume at Palazzo Pitti in Florence.

The presentation recalled Lineapiù’s beginning. Based in the Capelle area of Florence, the fancy yarn company was founded by president Giuliano Coppini in 1975. At the time, other yarn and textile mills in the Prato area manufactured a basic product with low prices. But Coppini saw a gap in the market and started creating luxury yarns based on fibers such as alpaca and mohair, catering exclusively to the high-end designer market.

“People thought my father was mad,” said Lola Coppini, vice president of Lineapiù at the company’s Pitti Filati stand. “But he was courageous. He persevered and in three years, Lineapiù was a success. It was right for the time, as Italian labels like Giorgio Armani and Versace were just beginning.”

While Lineapiù had its success in Italy, the company is eyeing China as its sales-driver of the future.

In a dual-pronged plan, the company has opened a separate mill in East China to produce basic yarns for the local market, in addition to establishing an affiliate in Shanghai to sell Italian-made Lineapiù yarns locally.

Top Line Ltd., a joint company between Lineapiù and Chinese companies Fenix and Consinee, was formed in April. Based in Ningbo, East China, Top Line will present its basic fantasy collection of 15 yarns in September at Shanghai’s Spin Expo yarn fair. Lineapiù is hoping the initial Top Line yarn collection, a combination of Italian imagination with low prices, will captivate local knitwear producers.

This story first appeared in the July 12, 2005 issue of WWD. Subscribe Today.

“Our intent is to combine Italian know-how with Chinese prices,” Coppini said. “We will see how this collection turns out and personalize the product to how the market wants.”

Meanwhile, in Shanghai, Lineapiù is embracing local demand for its Italian-made product, thanks to the acquisition of a new license that was given to the company in April. The Foreign Invested Commercial Enterprise License enables wholly foreign-owned companies to trade freely on the local Chinese market. Lineapiù was one of the first Italian companies to receive the license, said Emanuela Cattaneo, general manager of Lineapiù Yarns Shanghai Co.

“This license is the key to our future,” Cattaneo said. “Before, there were so many red-tape problems selling our product locally because you had to be a joint venture or be based in an ultraexpensive free-trade zone, but this license changes all of that. It gives us access to more companies and allows us to sell much faster and deliver within three days.”

Cattaneo said she already has welcomed new business on account of the license, including local, Japanese and European knitters based in the area.