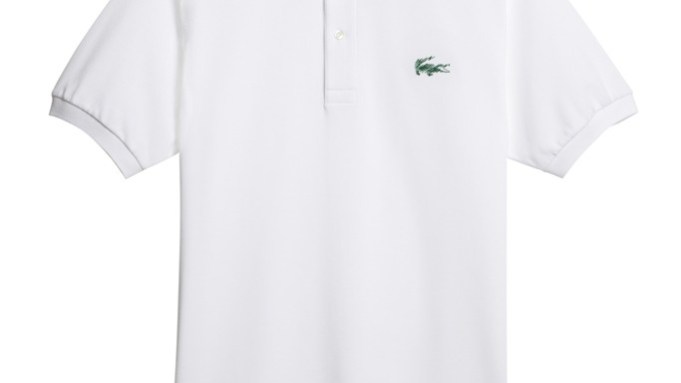 ﻿﻿1. SAVILLE’S TAKE ON A CLASSIC
﻿﻿For its eightieth anniversary, Lacoste enlisted graphic designer Peter Saville, the Factory Records founder who came to fame partly because of the sublime album covers he created for Joy Division, New Order, and Peter Gabriel, among others. On behalf of Lacoste, Saville went all out. He took the iconic crocodile logo and put his own spin on it—not just once, but with eighty discrete versions. He designed each little croc individually, and the Lacoste team sewed them onto the classic white polos. Collect all eighty.
$140, Lacoste.com

2. HERE, BOY
Can’t stand to leave your pup behind when you’re on a plane? Turn your pet into a service animal! Now, in general, service dogs are working animals meant to assist those with difficulties recognized under the Americans With Disabilities Act. But anecdotal evidence (we’re looking at you, guy in the first-class cabin of a recent flight from LAX to JFK with the pug, wearing a Louis Vuitton collar, on his lap) suggests that people with the usual neuroses (and generous psychothera- pists) are taking advantage.

3. BRING THE PAYNE
Advance word is good for Nebraska, the movie from Alexander Payne, the rarely misfiring director of Election, Sideways, About Schmidt, and The Descendants. Bruce Dern won Best Actor at Cannes for his role as a possibly brain-addled codger who takes his son (Will Forte) from Montana to Nebraska to claim a jackpot.

5. BECAUSE YOU’RE TOO BUSY TO WRESTLE A CROCODILE YOURSELF
Croc makes travelers look good, and we’re not talking about the rubber clogs. Ditch the plain trolley bags and go with Salvatore Ferragamo’s crocodile-skin carry-on.
$12,900, (866)337-7242

6. LE JACKET
The new Saint Laurent leather jacket, imagined by the house’s current creative director, Hedi Slimane, is the most sought-after not-so-guilty pleasure of the season. The reengineered Perfecto garment, made largely of Italian lambskin, debuted during Slimane’s inaugural men’s collec- tion for the atelier and has been hard to find ever since.
$5,290, YSL.com

7. SORRY TO PUBLICIZE YOUR NOVEL, MR. PYNCHON
The reclusive Thomas Pynchon is back with the sprightly Bleeding Edge (Penguin), about a New York fraud investigator in the days before 9/11. The book comes out just as director Paul Thomas Anderson (Boogie Nights, The Master) puts the finishing touches on Inherent Vice, the first Pynchon novel to be made into a movie.
$17, Amazon.com

8. MADE FOR WALKING
The classic European style is getting the reboot from British shoemaker Grenson. A departure from the traditional cap-toes of days past, the shoe of the season features embossed leather.
$380, Grenson.co.uk

9. A STYLE PROBLEM SOLVED
Bags are tricky for men. The man-purse is something not everyone can pull off. The backpack tells the world, “Don’t take me seriously.” And the messenger bag might get you mistaken for a messenger. Enter Tod’s, with its Double Stripe Collection of elegant leather cases. You’re guaranteed not to feel like such a schmo the next time you shove your stuff into the overhead bin.
$1,845, Tods.com

MUST-WEAR: Watch It
The wrist is a canvas on which a man can tell the world something about himself. The choice is huge, but we’ve narrowed it down to three: From left: Baume & Mercier’s Clifton series has a sharp, confident look inspired by mid-century design; $4,950, baume-et-mercier.com. The Audemars Piguet Royal Oak is a beautiful, rugged machine that is at once sporty and serious; $22,500, audemarspiguet.com. The rose gold of Chopard’s distinctive L.U.C Quattro makes it the right thing for eveningwear, perhaps in a Monte Carlo casino; $26,510, chopard.com.