Made in America: Domestic Sourcing on the Rise

Economic and political factors and circumstances have come together for nothing less than a revival of the U.S. textile and apparel manufacturing industry. 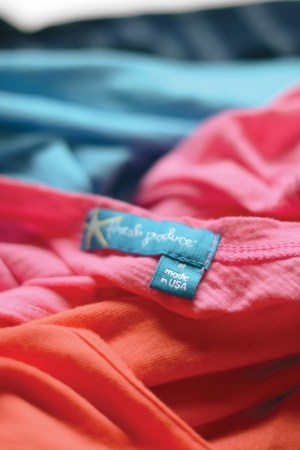 Like a phoenix, the American textile and apparel industry could be rising once again.

The crest of a new beginning has emerged from the scrap heap of the import era that spanned a generation and the emergence of offshore production and dominance of China as the world’s factory.

A confluence of factors and circumstances — from the Great Recession and protectionist politics to higher labor rates in Asia and technological advancements — have come together to create one of the most surprising developments the fashion world has seen in decades: Made in America is back and likely here to stay. Nobody thinks it will even come close to its heyday of the Fifties and Sixties, when factories flourished from Midtown Manhattan to the Carolinas and the industry employed more than one million people, but experts believe a need and a niche for fast-turn, high-quality, low-risk goods and production for American brands has found a new sourcing spot, right where it used to be.

“There is a certain amount of apparel we can and should be making in this country because we can make it in a matter of days, giving us quick response and test-marketing abilities,” said Gail Strickler, assistant U.S. trade representative for textiles and apparel. “We have yarn spinners in this country that have the most sophisticated equipment in the world and that are paying 4.4 cents per kilowatt hour of electricity. That’s globally competitive.”

“As a U.S. manufacturer, it’s one of our advantages when people want things to replenish their lines and keep them updated and be innovative every season,” said Brian Meck, vice president of sales and marketing at Fessler USA, based in Orwigsburg, Pa. “We can handle that and turn that very quickly.”

Meck said his firm, which makes yarns and knit tops, is receiving “very strong interest…from the larger brands and retailers” that are evaluating working with the company and testing small orders. Fessler already works with retailers such as Dillard’s and Nordstrom. (For more on Fessler, see page 6.)

“People have made the decision to establish some vendors and factories in the U.S. and find a way for it to work for them as a percentage of their sourcing strategy for flexibility and replenishment, and to reduce risk and create diversification,” Meck added.

Linda Corby, a sales representative for Texollini, a Long Beach, Calif., knitting mill, said the interest in Made in America is there, “but the big players have not committed yet.” Corby said, “It’s just a matter of time before they enter the market, too. It’s becoming a necessity because people are finding it’s not as easy to do business in China anymore and manufacturing in the U.S. can be done and it has its advantages.”

David Sasso, vice president of international sales at Buhler, said the revival of interest in Made in USA “is definitely real, but the real question is, ‘is it sustainable and how will it evolve?’” He noted that there is already a niche in sourcing for Made in the Americas, where goods are produced in other Western Hemisphere countries using U.S. yarns and fabrics.

“The U.S. manufacturers that are left have to make good products,” Sasso said. “We can always cheapen the product, but then we’re not going to compete.”

With all the talk about a resurgence of Made in America apparel, many question whether there is enough capacity to meet the need or enough trained workers to do the job.

Beth Hofer, senior manager for customer relations and educational resources for the Stoll Fashion & Technology Center, a three-year-old facility the German machine manufacturer set up on West 39th Street in Manhattan, said, “The timing is right because we see people who have a vision come into our facility. We have new designers coming in and saying, ‘We want to make it here and support the industry here.’”

Stoll conducts training classes on its knitting machines for students at the Fashion Institute of Technology, Parsons The New School for Design, Savannah College and Kent State University, and production managers from companies that either have purchased or plan to purchase Stoll machines.

The owners of Keff NYC, which installed the first six of 20 Stoll machines they have purchased in their new factory at 142 West 36th Street in the Garment Center last month, noted that without Stoll’s fully automated machinery, they would have had to employ many times more people than the number they plan to hire, and they never would have contemplated their new endeavor without the labor-saving technology.

“With the old hand-knit machines we had 10, 20 years ago, it would have been impossible,” said Leonard Keff, a co-owner of Keff NYC.

Experts agree that the fabric and materials of a garment make up about two-thirds of the cost, with the balance consisting mostly of labor, along with shipping and incidentals. They also stress that any mills or factories looking to open or expand in the U.S. must use modern machinery to be able to compete with foreign imports.

Mike Hubbard, vice president of the National Council of Textile Organizations, said, “Plant capacity utilization is not full. The industry could ramp up pretty quickly.”

Hubbard said if the only factor considered is wages, the scale tips toward China for apparel production. But with wages and other costs rising in China, he said the U.S. becomes a more viable alternative. The American Apparel & Footwear Association said average hourly earnings for production and nonsupervisory workers at U.S. apparel manufacturers in 2011 was $11.96, compared with about $5 an hour in China, which has seen wage rates more than double in the last three years.

“If you are an importer and sourcing closer to home, it is easier to turn the tap on and off,” said Hubbard. “Whereas, if you are importing from Asia, there is so much more of a lead time.”

Howard Silver, who owns and operates Jasco New York with his wife, Madia, said his company, based in White Plains, N.Y., produces all its fabrics within a 200-mile radius of Manhattan and has been able to survive the import onslaught because “we specialize in servicing boutique, high-end designers and emerging talent, thus our production is not volume-driven; rather, quality and service are our main focus.”

Silver said he’s encouraged by the revival of Made in the USA because Jasco is predicated on domestic fabric production and it works with U.S. knitters, dyers and finishers.

NCTO said the U.S. textile industry might have been forgotten, but it’s far from gone, noting that textile firms last year employed 238,000 workers, who make an average salary of $575 a week. Overall textile shipments were $53 billion in 2011, with exports growing 13.4 percent to more than $17 billion in 2011, making it the third-largest exporter of textile products in the world.

Hubbard at NCTO also pointed out that U.S. textile firms invested $16.5 billion in new plants and equipment from 2001 to 2010, and recently producers such as Unifi Inc. and Dupont have opened recycling facilities to convert textile waste to fibers, yarns and resins.

For some brands, the strategic advantage of U.S. sourcing includes a broader picture.

“Having our clothing manufactured in the USA is very important to our brand DNA, allowing us to consistently give our consumers the color and quality of clothing they have come to love and associate with our brand,” said Mary Ellen Vernon, chief executive officer of Fresh Produce, a Boulder, Colo.-based company that makes about 80 percent of its garments and purchases 90 percent of its fabrics in the U.S. “Made in the USA is good for the bottom line. Fresh Produce’s U.S.-based production model enables higher sales and requires less working capital. Higher sales as reorders of the fastest-selling items can be accommodated over the course of the season. Less working capital is needed because more production is matched to actual orders instead of building speculative inventory based on guesstimated forecasts made up to six months in advance. With better inventory control, there are fewer markdowns and fewer markdowns result in lower overall costs.”

Vernon noted that two-thirds of shoppers at Fresh Produce — which has 400 independent retail accounts, 25 company-owned stores and an online business and employs about 400 people — say Made in the USA is an important factor when buying apparel.

No nonsense, a division of Kayser-Roth Corp., produces 95 percent of its products in the U.S. The company’s “Made in USA” presentation on its Web site explains how this goes hand-in-hand with being more efficient and eco-friendly in its manufacturing plants in North Carolina. “When you buy No nonsense socks, you’re helping keep jobs at home,” the company says.

Edward Chapman, ceo of Marchesa, said all of the collection is made in its New York atelier. He said it’s important to designer Georgina Chapman and business partner Keren Craig to be involved with every step of the production process.

“Georgina is incredibly hands-on and oversees every last detail of design,” Chapman said. “New York’s Garment District has manufacturing capabilities with a very high level of expertise and craftsmanship. Additionally, we like to do as much here as we can to support local manufacturing, which is key for the preservation of our garment industry here. I think that many businesses are recognizing the importance their consumers’ place on USA-made product, but ultimately it has to make sense from a business and creative perspective. We find it makes good business and creative sense for us due to the quality of handcraftsmanship and level of artistry that goes into Marchesa’s couture collections. The factories in New York are able to manufacture at the highest level so we can be sure our product is of the highest quality when it reaches the shop floor.”