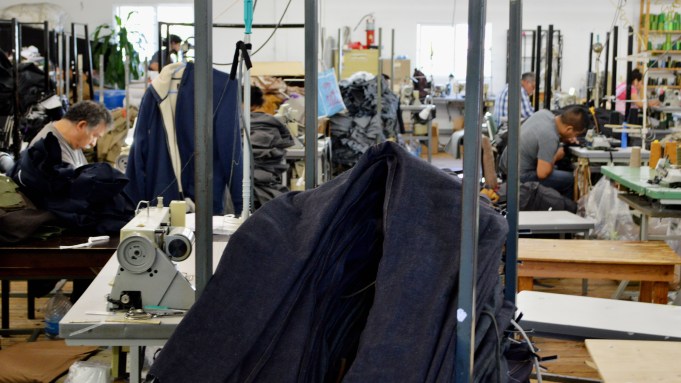 LOS ANGELES — Rolls of brightly colored fabric are being slowly rolled out on the cutting table of Los Angeles manufacturer 9b Apparel.

The company, which employs more than 150 people across five factories in L.A., works with more than 200 customers offering services in cut-and-sew, denim, knits, heavyweights and outerwear.

Owner Art Rahbar surveyed a worker as he prepped fabric that will be used by children during summer camp to make tank tops.

The company recently began working with Amazon after one of the tech giant’s representatives approached it and asked 9b to produce a few items that didn’t interfere with what the firm already does for its clients. It’s more one-off projects, such as an apron and breastfeeding line, at the moment rather than anything that’s fueling Amazon’s quest to dominate fashion.

The company survived the last recession when it turned its own business model on its head and introduced flexible manufacturing, meaning no minimums on the cut-and-sew, instead choosing to work with manufacturers that, at the time, were writing much smaller orders.

“Everybody thought we were going to die; it worked, especially during the recession because people didn’t want big quantities,” Rahbar said.

“It’s about being creative. You have to be able to generate money from different sources because I learned my lesson through the recession,” Rahbar said. “Even though we were growing, it was really scary and these [workers] have families.”

Rahbar has been doing this for 15 years and is one of the scores of factories integral to the city’s manufacturing landscape, one which many say is shrinking. Rahbar prefers to see the situation with a more glass-half-full attitude, noting the rise of the Millennial could help lead to a further revival in Made in America.

“I think people are coming back to the U.S. The Millennials, these are the kids that don’t even know how to go to China or the Philippines or Bangladesh and make something. And they don’t want to,” he said. “It’s not that they can’t find out; most of them don’t want to. They want everything to be local and have a story behind it. You see the rise of the farmers’ market around your neighborhoods. There used to be one or two in L.A. Now there’s almost one in every neighborhood because people want local. People want their stuff identified with something.”

Los Angeles has any number of stories of young guns whose brands were born out of founders pounding the pavement and walking randomly into sew houses to figure out how to get their product produced. One is Jeff Abrams, owner and designer of the fast-growing Rails line. There is also Revolve chief brand officer Raissa Gerona, who also went that route when she was on the brand side and just starting out. There is also greater transparency with e-commerce brands such as Everlane or Reformation, the latter of which recently opened up its factory to public tours.

“This Millennial generation is extremely exceptional and I don’t think they even know it. They’re very entrepreneurial, extremely bright because they were born in the Internet age,” Rahbar said. “It’s a different mind-set and I’ve noticed it mostly because of the clients we see every day and these kids are not super money-hungry. They’re more about their life and their environment. Social consciousness is huge in this generation. It’s amazing and I really like that.”