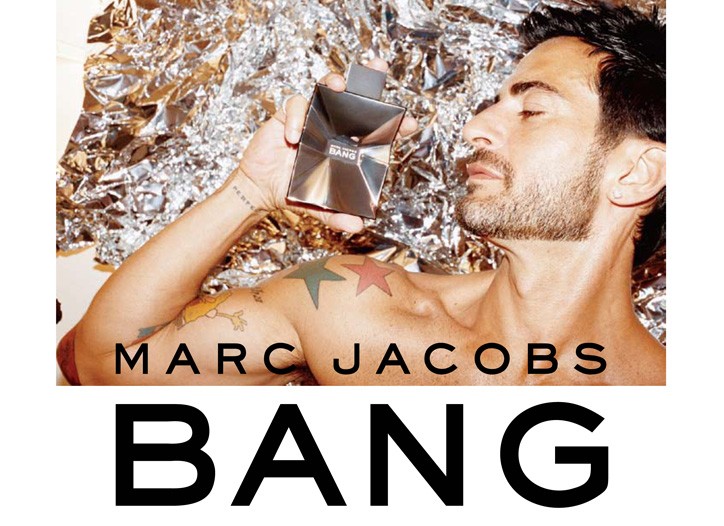 Marc Jacobs is baring his all for his new men’s fragrance, literally.

To make a point that the new fragrance, Marc Jacobs Bang, is a personal passion, Jacobs will appear in his own advertising for the first time, lying naked on a silver Mylar bed — with only an oversize bottle of the fragrance for modesty’s sake. And it’s only one of many projects the designer has up his sleeve — he also is eyeing men’s and women’s underwear as well as color cosmetics.

Posing nude was business partner Robert Duffy’s idea, said Jacobs on Thursday in an exclusive interview. “Robert and I work closely with Coty on these projects, and he said, ‘Marc, you look so great now — you should be the model for men’s fragrance.’ My immediate reaction was, I don’t know. But then I came to see that it made sense. Men’s fragrance, unlike women’s in a certain way, is very personal. It’s a layer on top of skin — for women, it can be like changing a makeup color, but not for men.

“Once I agreed to be the model, I couldn’t see what I would wear to express this. We tried it with clothes, but it didn’t work. Then Juergen [Teller, who shot the campaign] had the idea for the silver Mylar, and it all came together. The silver Mylar also gives it that flash, that bang.”

While the fragrance will bow July 30 at Bloomingdale’s and Marc Jacobs stores, the visual will begin running in September men’s, lifestyle and fashion publications when the scent goes to about 1,800 department and specialty stores in the U.S. “It will be everywhere and in your face,” promised Claire Fermont Langlais, senior marketing director for Marc Jacobs fragrances at Coty Prestige. No worries: There’s also a version that will play in Peoria, Ill. [Jacobs cropped at the shoulders and holding the scent near his face] and a version suitable for the Middle East [just the bottle].

“This fragrance ad isn’t about some chiseled face on a beach — that approach wouldn’t be in line with what we’re doing,” said Jacobs. “This fragrance is for a contemporary guy, who, even if he isn’t young, has a younger spirit.” However, he’s realistic about how widely the almost-full monty ad will be shown. “I think more people are going to see [the Midwestern] version of the ad,” he said with a laugh.

While it’s the first time the designer has appeared in his own advertising, it isn’t the first time Jacobs has exposed almost all for fashion: He and Duffy appeared nude on the cover of WWD on Sept. 9, 2006. “That was about protecting the skin,” he reminisced with a laugh. The visual was intended to raise awareness for the New York University School of Medicine Interdisciplinary Melanoma Cooperative Group — Duffy is a melanoma survivor. “I made everyone take their clothes off for that — Robert, the models, my clients.” That list included Julianne Moore, Christy Turlington, Naomi Campbell, Hilary Swank, Dita Von Teese, Selma Blair, Carolyn Murphy, Winona Ryder, Brandon Boyd and Rufus Wainwright. (Jacobs has also bared all in many other publications.)

Not that the designer has only nudity on his mind. Jacobs noted he and Duffy hope to do underwear and lingerie next. “That’s a very exciting category — we feel it’s fashion and not just underwear,” said Jacobs. “Whether it’s a boy and you see the top of his underwear under jeans that have ridden down or a women with a bra strap showing when she’s wearing a tank top, it’s fashion. Again, it’s an accessory, and that’s a category that really interests me.”

He’s also keen to do color cosmetics. “Robert and I would love to do cosmetics at some point, even if it is a limited range,” said Jacobs. “Makeup, like perfume and clothes, is part of the ritual, which every woman I know enjoys choosing and wearing. I love how transformative all of that is. Makeup is an accessory as much as shoes and handbags are, and relates to fashion very strongly. Any opportunity I have to choose colors and design, I love.”

But for now, Jacobs’ full focus is on Bang, his first new men’s scent in a decade. “The name came to me first,” said Jacobs. “We had been approached by Coty to do another men’s scent — we did one many years ago — and I was in the gym, and the name Bang came to me. As a word, it has so many connotations, including a sexual connotation. And I loved the immediacy and the sound of the word. For me, fragrance is always a multilayered process — Bang was the catalyst for how this fragrance came to be. You’re drawn to try it, to experience it.”

Next came the development of the juice. “I wanted to do something that I would love,” said Jacobs. “I particularly like spice notes, especially pepper, so that became a starting place.”

The scent, which was developed at Givaudan in collaboration with Ann Gottlieb, has top notes of black, pink and white peppercorns, a heart of primal masculine woods and a drydown of hypnotic elemi resinoid, aromatic benzoin, vetiver, white moss and patchouli. Eaux de toilette in two sizes, 1.7 oz. for $55 and 3.4 oz. for $75, will be offered, as will a 5.2-oz. aftershave balm, $40; a 6.7-oz. hair and body wash, $25, and a 75-g. deodorant stick, $22.

The bottle is a silver-toned shape that is crumpled in as if it had taken a bullet to its center. “We worked on the bottle with the visual of doing something classic that had been broken in some way, something fractured — almost like it had been crumpled and then smoothed back out,” said Jacobs.

The scent is expected to appeal most strongly to men ages 25 and older, said Langlais.

Promotion of the fragrance also will involve an extensive Web campaign, noted Lori Singer, group vice president of global marketing for Coty Prestige Designer Fragrances, adding that Twitter, Facebook and Foursquare all will be part of the effort. The digital component will begin at launch and be spread through the end of the year.

“It’s how young people stay in touch,” said Jacobs. “That’s how they receive information, and that is a fact: Almost everyone I know is constantly on Facebook and Twitter. Plenty of people are private, but young people like to communicate what they’re doing all the time and they like to know what their friends are doing all of the time. Whether I like it or not doesn’t matter. It exists. It’s a fact of life. It isn’t like a magazine that has a three-month lead time. If you own any form of a gadget — an iPhone, an iPad or whatever — you can access information immediately, so of course it is growing at faster and faster speeds. It’s so immediate.”

Extensive sampling, including scented ads and vials on card, is also intended to be part of the marketing mix.

While Jacobs and Coty executives declined to comment on sales projections, industry sources estimated Bang would do about $60 million at retail globally, with about $24 million of that figure expected to be done in the U.S. Industry sources also estimated that about $25 million would be spent on advertising and promotion globally in Bang’s first year on counter, with about half of that figure expected to be spent in the U.S.

Jacobs said he has just had a first meeting for his next women’s fragrance. “I’m not sure when it will be out — it doesn’t even have a name yet,” he said. But he’s excited.

“I feel like I’ve gotten into my fragrance groove,” said Jacobs. “We’ve been very successful with Daisy and Lola — we hope to have another winner, this time in the men’s market, with Bang. We want to have that same kind of impact.”