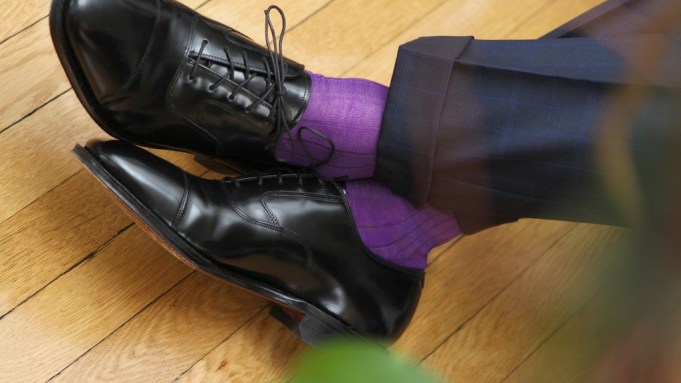 When Ricky Choi and Phil Moldavski came up with an idea for remaking guys’ socks drawers through a start-up called Nice Laundry, they hoped to raise $30,000 on the crowdsourcing platform Kickstarter. Instead, the duo just passed the $100,000 mark and have signed up over 2,000 customers for a business that won’t even ship its first product until July.

“Four weeks ago we didn’t even exist,” said Choi. “The message must be resonating with people.”

The interest in a business such as Nice Laundry is indicative of a trend in the men’s business that Mitchell Lechner, president of the PVH dress furnishings group, calls accessorizing. “It’s the new buzzword for men’s furnishings,” he said, pointing to the popularity of everything from socks, pocket squares and cuff links to scarves, lapel pins and bow ties.

“As men become more comfortable with fashion, accessorizing with these different elements will continue to grow over the next several seasons,” Lechner said. “Men have a new comfort level with fashion. They now understand and embrace different colors, silhouettes, and fabrics in an array of product categories that in the past were only thought to work in women’s wear.”

Simon Mendez, president of the British Apparel Collection, which is the hosiery licensee for Robert Graham and Original Penguin and has its own Punto and JM Dickens labels, said the shift started around 2009.

Mendez, whose family has been in the hosiery business for four decades, said that although their brands “always had a bright element to the seasonal presentations, it was really only to keep the buyers from falling asleep. We never sold any of them. But today, there’s been a complete 180.”

Bright colors and lively patterns have exploded and it’s the “brighter the better at this point,” he said. Stripes are among the bestsellers and novelty patterns such as penguins and other “conversation starters” have taken hold. “People definitely notice them,” Mendez said.

Mikael Soderlindh, cofounder of the Swedish brand Happy Socks, which opened its first U.S. store earlier this month in New York’s SoHo neighborhood, said when the brand was launched five years ago, British designer Paul Smith was one of the only brands to offer high-quality patterned socks. But today, men wake up, put on their suit or jeans and choose a pair that reflects their mood that day. Oftentimes, the new slim-fitting pants they choose are shorter than in the past, allowing others to catch a glimpse at the socks.

Soderlindh agreed the phenomenon started during the recession when retailers around the world “couldn’t sell much of anything. But people still wanted to buy something.” The solution was a lively, bright pair of socks that didn’t cost much — most Happy Socks models retail for $12 — and managed to make them feel and look good at the same time.

The brand is on track to sell 10 million pairs of socks this year and they’re available in 70 countries. Soderlindh said, “There’s no market where socks aren’t working. People like it. Men don’t have many other ways to express themselves so I don’t think it’s a fad; it’s here to stay.”

Another new online sock brand, Soxiety, went live on Feb. 14 and although there’s also a small women’s component, Edoardo Cela, cofounder and chief executive officer, said: “We really want to push the men’s element, that’s where the growth is. Socks are an accessory that men are interested in.”

The socks are designed and manufactured in Italy and retail for $12 to $25, depending upon material. Top sellers so far are striped models as well as solids in colors ranging from purple and green to bright red. At the end of this month, Cela said, Soxiety will launch a subscription service where customers can provide the company with a description of their likes and dislikes and they’ll be sent a company-selected assortment quarterly. Sometime before summer, Soxiety will launch a design-your-own-sock function on its site, he said.

Nice Laundry will offer 18 different patterns, ranging from mild to conservative, sold in six-packs which will retail for $39, or 18-packs for $89 with free shipping, according to Choi. “You can refresh your entire sock drawer for under $100,” he said. Most preorders have been for an assortment called the Dreamer, a mix of stripes and polka dots.

Another twist is that the company will send a prepaid shipping label with each order for customers to recycle their old socks. These will be sent to Trans-Americas Textile Recycling Co., one of the nation’s oldest textile recyclers, to reuse the material. “The U.S. generates 21 billion pounds of textile waste per year, on track to hit 35 billion pounds by 2019. We want to do our part to help get that number to zero,” according to the company. “Just as your sock drawer deserves a second chance, so do your old socks.”

But it’s more than just socks that are making an impact. Everything from shoelaces to pocket squares sporting lively florals, paisleys, prints or conversationals are selling at retail, according to PVH’s Lechner. “We’re in a real color cycle,” he said. “And this gives guys a reason to buy. They don’t have a lime green sock or a floral pocket square in their closet, but they’re cool and they’re different.”

Lechner continued: “As men jockey to put their best foot forward, their wardrobe becomes a key ingredient. Accessorizing provides them the opportunity to showcase their personality in and out of the office. One of the simplest ways to garner the right kind of attention is with a pocket square or statement tie in a new exciting color. This affords men the opportunity to update their existing wardrobe in an inexpensive manner.” He said the rise of style blogs is also leading to increased business: “Everything is more accessible online, and ‘how-to’ inquiries provide men with instant information on achieving these new looks. As a result, they can easily see themselves wearing new items, experimenting with new trends and embracing their own sense of personal style.”

Alyssa Mishcon, U.S. president for Thomas Pink, quipped that the company’s tag line — “Any color as long as it’s pink” — is apropos for the latest trend. “The collection has always been a rainbow of shirts, ties and men’s furnishings, but in recent years the U.S. customer has really taken interest in colorful socks and pocket squares,” she said. “These accessories offer men a chance to express themselves and add interest to their wardrobes without having to take a big fashion risk. In general, men are getting comfortable with playing with color and accessories. Professional men are turning to pocket squares, and even bow ties, to dress up their look in the workplace.”

For their casual needs, Mishcon said they’re “buying more button-cuff styles to wear with a blazer and a pocket square. This puts an emphasis on the pocket square to add a pop of color. The popularity of these alternative accessories has really taken off, alongside the growth of our slim-fit shirt business over the past three years,” she continued. “We offer a full array of colors and patterns in slim fits, and men are looking to accessories to dress up the look; socks, ties, and pocket squares are where men can really have fun. Purple is consistently popular across all categories — it’s very versatile, almost like the new blue.”

For fall, the company will push the envelope even further, introducing a pocket square with four separate designs that can be folded various ways to complement different shirts. “We aim to offer unique furnishings options that add value and a fashion-forward approach to traditional men’s dressing,” she said.