Men’s Firms See Boost by Being Made in USA

Domestic manufacturers are waving the flag in a bid to boost sales. 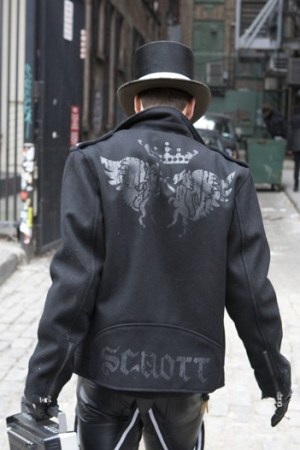 Price is paramount at retail these days, as consumers continue to hunt for bargains amid the recession’s gloom. But a number of domestic men’s wear manufacturers are asking shoppers to consider another factor when making purchases: patriotism.

As the stock market fluctuates, fortunes evaporate, major companies file for bankruptcy and the ranks of the nation’s unemployed rise, vendors that produce in the U.S. and retailers that specialize in domestic apparel believe a wave of nationalism will prompt some consumers to seek out apparel made in America.

Bill Thomas, founder and chief executive officer of Bills Khakis, said the desire among retailers for American-made apparel is stronger than a year ago. “People are starved for things that are true to what they are,” said Thomas. “There’s more relevance for these products now.”

It seems like an antiquated sentiment in a post-North American Free Trade Agreement economy. After all, what does “buy American” mean in a world where Ralph Lauren, the epitome of American style, produces its suits in Italy, and Hugo Boss, the uber-German brand, makes suits and trousers in Cleveland?

The global supply chain suggests the apparel industry is a post-national business in which consumers are more likely to respond to brand than country of origin. There is a well-known story of an executive at Ermenegildo Zegna, who, when asked by a reporter where a certain suit was made, responded, “It is not made in Italy or Portugal; it is made in Zegna.” When the world is flat, no one is supposed to notice the country of origin, or so the logic goes.

But according to a number of retailers and vendors, the economic crisis is causing some consumers to pay more attention to not only how much they are spending, but also how they are spending it.

“I believe there is a growing sentiment for products made here,” said Leonard Simon, owner of Wright & Simon, a men’s store in downtown Wilmington, Del., that specializes in domestically produced classic apparel such as Hickey Freeman and Corbin. “There’s a little more patriotism out there in the world than there was before. For me, it’s a way to separate myself from other retailers.”

Simon is planning to promote domestically made products in-store. He’s not alone. Individualized Apparel Group, the privately owned company that manages a portfolio of brands including Oxxford and Gitman Brothers, is organizing trunk shows with retailers around its “Made in America” goods.

“ ‘Made in America’ is cool,” said Joe Blair, the president of IAG. “It gives retailers the opportunity to tell their customers a new story.”

Schott Brothers Inc., the outerwear maker that produces half of its jackets in New Jersey, is emphasizing that story as well. It’s playing up its domestic manufacturing on hangtags, profiling factory employees in communications with retailers and is considering installing a Web cam in the factory so consumers can watch jackets worm through the production line.

“People are starting to care a little more about where their clothes are made,” said Jason Schott, the company’s chief operating officer and great-grandson of the founder. “It’s a niche customer that pays attention to these things, but I hear from our customers that more people are asking about it.”

Marty Staff, ceo of JA Apparel Corp., which produces Joseph Abboud suits domestically, and six months ago began inserting a tag into the breast pocket of its suits that highlights its Massachusetts factory, added, “Shoppers are increasingly democratic. After price, Americans want to buy American.”

Even major retailers said American manufacturers could stand to benefit from the recession. “It’s part of our heritage at Lord & Taylor to support American design talent and products that are made in America,” said Mary-Beth Sheridan, the retailer’s senior vice president and general merchandise manager of men’s. “It’s especially poignant now during these tough economic times.”

Polling and research firms said they don’t have recent data on the role country of origin plays in Americans’ purchasing decisions, or whether the recession has impacted that role. However, the economic downturn appears to be changing consumers’ opinions of domestic cars. A Gallop poll in February showed that 37 percent of Americans would only consider American companies when buying a car — up 7 percentage points from December. Twelve percent of Americans would only consider buying a car from foreign companies — down 3 percentage points from the December poll.

Whether Americans’ shifting preference for U.S.-made cars reflects a larger change toward domestically produced goods in general is unclear. At the moment, less than 10 percent of the apparel bought in the U.S. is domestically made.

But using consumer dollars to funnel energy into the American economy does seem to have the zeitgeist behind it. President Obama’s American Recovery and Reinvestment Act is injecting billions into the system, and some of the $150 billion in new infrastructure is attached to “buy American” provisions, which has raised cries of “trade foul” from foreign governments.

The road to America’s global economy has been punctuated by such moments of nationalism, when free trade was discouraged and the country rallied behind its domestic products. The earliest and most famous example was the Boston Tea Party, the protest that marked the climax of the colonists’ promise to swear off English goods.

Since then the country has embraced the Buy American sentiment during the Great Depression, the Seventies — when domestic manufacturers began to lose jobs to foreign competitors, and most recently in the mid-Eighties when textile mogul Roger Milliken launched the “Crafted with Pride in the U.S.A.” campaign — a well-funded initiative that spent millions decrying the impact foreign goods had on domestic manufacturing. Wal-Mart was an early supporter. But by the mid-Nineties, Wal-Mart and the majority of retail had embraced the cost-cutting benefits of the global supply chain.

One marketing expert is doubtful the cratering economy will stem Americans’ growing taste for imported apparel — and the lower prices often associated with it.

“People will talk about buying American in their offices, but when they get to the store and they are standing in front of an American-made product and a cheaper foreign product, they will go for price,” said Mark Stevens, ceo of marketing firm MSCO and author of the Business Week bestseller “Your Marketing Sucks.” “Patriotism will always lose to economics.”

A recent paper on the topic suggests a more complicated relationship. Produced by 14 professors from universities around the globe, the study, called “An international perspective on luxury and country of origin effect,” found that a product’s country of origin has little effect on commodity goods — where price is the primary factor — but has “medium impact on the evaluation of luxury goods.”

As such, country of origin can play a significant role for luxury brands in the U.S. Richard Cohen, president and ceo of Robert Talbott, said making the company’s ties and dress shirts in America is essential to the brand’s identity, but secondary in terms of marketing value.

“We don’t wrap our products in the American flag, but in terms of our authenticity as a California lifestyle brand, it means our story rings more true,” he said.

Thomas of Bills Khakis agreed, saying the “Made in” label on his apparel serves the brand. “If you’re going to make an authentic American khaki, why not make it in the United States,” he explained. “That said, we’re not waving the flag. It’s just not who we are.”

No one expects apparel consumers to turn to isolationism. The marketplace is a global one, and America, for all its problems, has a new president who is committed to engaging the world. “This is not a protectionist moment,” said Stevens.

But the economic crisis has put a spotlight on the struggles of our homegrown industries, and in that spotlight some companies stand to capitalize.

“From a positioning point of view, we plan to play up Made in America,” said Staff. “We think the consumer is way ahead of retailers on this.”