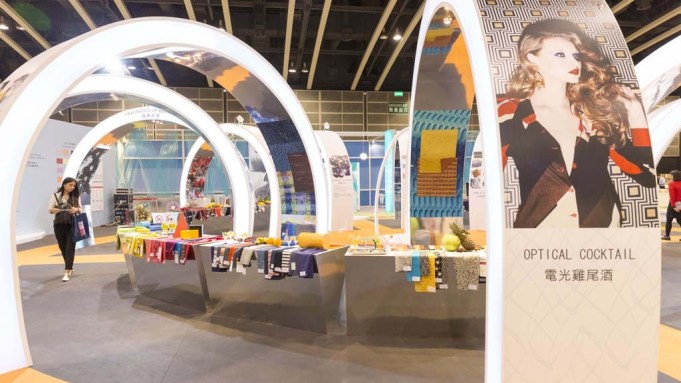 HONG KONG — After almost 30 years, Messe Frankfurt has decided to end the Hong Kong textile fair Interstoff, which took place twice a year, to focus on its shows in China.

The last edition of the fair took place at the Hong Kong Convention and Exhibition Center from Thursday to Saturday.

Organizers pointed to the steady shift in textile manufacturing and fashion buying offices to Mainland China from Hong Kong and said it planned to focus its attention on Mainland China, where its eight textile fairs were expanding rapidly.

When Interstoff opened in Hong Kong in 1987, it was the first international trade fair Messe Frankfurt organized outside Germany. The company gradually expanded into the Chinese market and now organizes eight textile trade fairs in eastern and southern China.

On day two of the fair, exhibitors received a letter from the Organizing Committee that explained: “Due to the favorable market conditions, the eight textile fairs Messe Frankfurt holds in Mainland China are expanding rapidly and the organizer is confident that by leveraging its business know-how and resources from Hong Kong to fairs north of the border, this growth will continue for the foreseeable future.”

Two of the best-performing fairs on the Mainland are the Intertextile Shanghai Apparel Fabrics and Intertextile Pavilion Shenzhen. The Shanghai festival is already the largest textile trade fair in the world and last year drew more than 69,000 visitors from 98 countries and regions. Next year’s fair is expected to be even bigger and in expectation of the increase, the upcoming spring edition will be moved to a larger venue, the National Exhibition and Convention Center.

“The fair has seen a steady upward trend over the past 10 years as its exhibitor number has more than tripled compared to 2004, while visitor number has expanded four-fold,” said Detlef Braun, who is on the executive board of Messe Frankfurt.

The announcement to pull the plug on the fair was made at a reception for exhibitors at the end of the first day of the event and the mood on the fair floor the following day was somber, not helped by the poor buyer turnout.

“I’m not surprised,” said Kohei Yamamoto from Osaka-based Sunwell Group, who has attended twice a year for six years. “Just look around and you can see there are not many people here. It used to be we would see a lot of buyers from America, Europe and Australia, and now they are all from Shenzhen. This time it looks more like a Chinese domestic fair.”

Yamamoto said he and his boss were already scrambling to make plans for next year and would most likely attend the Intertextile Shanghai Apparel Fair and Première Vision in Paris. Admitting that he felt sad that Hong Kong had lost a stable fair, he expressed concern about the future for the city.

“When this fair is gone, will customers want to keep an office here? Maybe it will mean everyone will think Hong Kong is not important any more and move their office to China,” said Yamamoto.

Taiwanese Daniel Wu, president of DJIC Ltd., said the decision to axe the Hong Kong fair was a result of a lackluster global economy that meant that U.S. and European buyers didn’t have the budget to travel and search for materials. He said the Hong Kong Trade Development Council had already initiated talks with him and others in the Taiwanese pavilion.

“Maybe we will do something with the TDC in Hong Kong, but still we need to find another place to exhibit. We are already going to Intertextile in Shanghai,” said Wu.

Buyers were thin on the ground at the three-day fair and there were few Western faces. Anna Zeng from Queen’s Fashion in Shanghai was the only buyer looking over the new fabric display in the center of the exhibition space at lunchtime on day two.

“It’s a shame the fair is closing because although there aren’t many people here, the quality of the fabrics is really good,” said Zeng.

The fair showcased perhaps its most inventive and creative fabrics yet. Fabrics are working much harder now, driven by the demand to be functional as well as fashionable. And eco-friendly yarns that are good to both the planet and the wearer were highly visible, too.

Frank Chung from the Taiwanese company 3RTW, which has been making functional fabric for 12 years and exhibiting it at Interstoff for almost as long, said he was excited to exhibit the foam-cutting technique of their 3-D fabric and that two years ago Armani was the first to snap up the new fabric.

“Before, it was just functional, now it is function and fashion so we are having to rethink our approach about how to be more fashion conscious,” said Chung.

“Knitted garments are sensitive to tension; this treatment helps prevent shrinkage and makes the fabric softer. We have a patent pending,” said In-Yeol Lee, a manager at KOTERI.

Chung will also have to rethink where to exhibit 3RTW’s new fabrics and admits he is a little wary of exhibiting on the Mainland.

“We have taken a patent out on our technology. Already we have been copied by a Chinese company and are taking them to court,” said Chung.

Still reeling from the shock of the decision to end Interstoff, a good number of the regular exhibitors who weren’t already exhibiting at Intertextile Shanghai Apparel Fair said they would probably go there next year.