The men’s wear designer has teamed with Hewlett-Packard and Gilt to create a luxury watch with smart technology. 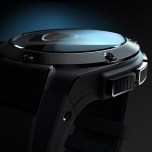 Michael Bastian is getting into the wearable technology game.

This story first appeared in the July 31, 2014 issue of WWD. Subscribe Today.

The men’s wear designer has teamed with Hewlett-Packard and Gilt to create a luxury watch with smart technology. The Michael Bastian Smartwatch looks like a sleek, gentleman’s timepiece but it also can perform a range of functions. These include providing weather, stock updates and sports results; remote control of music; calendar and appointment reminders; e-mail and social media notifications, and texts.

It features a 44-mm. stainless steel case, inlaid button controls and three interchangeable watchbands: black rubber, perforated brown leather and olive green nylon. It has crown bezel bolts and a lighted chronograph, and was inspired by the dashboards and trim details of luxury cars. The watch is water-resistant and has a power reserve of up to seven days. It is compatible with both Android and iOS devices and syncs with an app that allows users to interact with the watch and customize its features.

Bastian has also designed a limited-edition version of the watch, which features an all-black design.

Bastian said the wearable technology pieces currently available in the market are geared more toward function than fashion. “We’re at the beginning of the wave, but the smart part comes before the visual part,” he said. “We felt there was a need for something that feels like a watch first.”

Rob Le Bras-Brown, senior vice president of marketing, printing and personal systems for HP, agrees. “Fashion has always been a fascinating area to explore,” he said. “And we’re revisiting how fashion and technology can come together.” He called the smart wearables market an “interesting platform to explore that idea,” and turned to Gilt to find a designer that would be amenable to the process. “We challenged them to find a designer to work with us as an engineer, not just the brand on the watch.”

The result was the Michael Bastian Smartwatch. “We’re the technology engine to enable the vision of the designer,” Le Bras-Brown said.

The watch has yet to be priced, but will be launched on Gilt exclusively this fall. Tracey Weber, chief operating officer of Gilt, said the watch affords the online retailer “the perfect opportunity” to offer its customers “a gorgeous watch that embodies the ultimate in style and function.”

Le Bras-Brown said he hopes that the watch will be the first of several products offered by HP in partnership with Bastian or other fashion brands. “I think we’ve found a wonderful symbiosis to work with someone who has an eye for fashion,” he said. “We’ll be exploring further opportunities with other partners as well.”