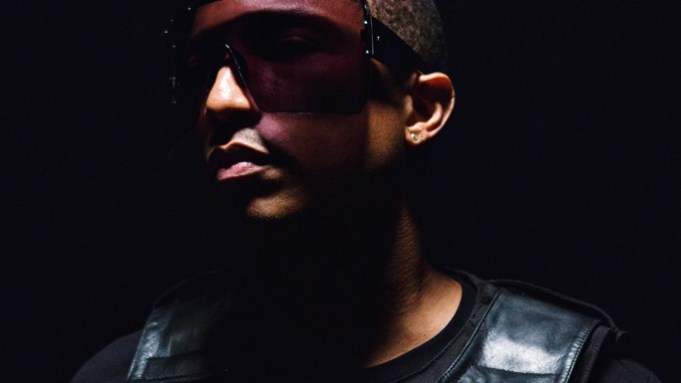 MILAN — Moncler and Pharrell Williams have again teamed for a special project. The three-time Grammy Award-winning musician and producer has designed a men’s and women’s range of Moncler Lunettes sunglasses and will front the advertising campaign for the brand.

In 2009, the American songwriter, music producer, recording artist and fashion designer created a special line of men’s jackets for Moncler.

“He represents the very best of all that is contemporary, creative and international, the same characteristics that underpin the entire Moncler project and the Moncler Lunettes collection,” said chairman and chief executive officer Remo Ruffini.

The sunglasses, which the company described as “halfway between futurism and Fifties Style,” will be officially presented in Paris on Sept. 26 to mark the opening of the new Moncler flagship at 7 Rue du Faubourg Saint-Honoré. The event coincides with the Paris-based eyewear fair Silmo, running Sept. 26 to 29.

The frames, made from a single piece of titanium, are thick on the sides, while the front has a lightweight look. The lenses, in nylon like the arms, guarantee flexibility and resistance. The unisex model toys with the concept of an oversize mask, and the acetate arm is covered with a thin steel laminate.

The Williams-designed models will be available at Moncler boutiques, on the brand’s Web site and in selected multibrand concept stores and international opticians from late September.

Meanwhile, the industry continues to speculate about Moncler’s potential second attempt at an initial public offering. On Thursday, Il Sole 24 Ore reported the Italian brand was aiming to float in Milan in November with a valuation of 2.3 billion to 2.4 billion euros, or $3 billion to $3.2 billion at current exchange. To publicly list that month, Moncler would have to file documents to Consob, Italy’s equivalent of the Securities and Exchange Commission, in September.

As reported in WWD in June, sources in Milan said the Italian brand has chosen a pool of banks including Bank of America Corp., Mediobanca, Banca IMI, J.P. Morgan and UBS to manage the IPO and that it is waiting for the right window. Moncler shelved its IPO in summer 2011, but Ruffini has repeatedly said a listing remains the company’s goal — an objective confirmed in March as parent company Eurazeo identified this as the most likely exit method either at the end of this year or in early 2014.