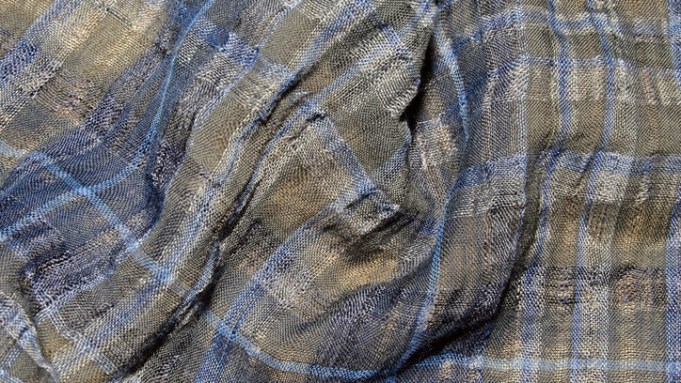 PARIS — It’s all about blending in for spring 2012 fabrics, with high raw material costs pushing weavers to increasingly experiment with alternative fiber mixes.

Designers attending the recent edition of Première Vision here embraced the trend for blends, lauding the innovation on display across collections. Among the fabrics being blended with cotton were linen, viscose, synthetics and cellulose-based fibers like Lyocell, Modal and Tencel.

“It’s a challenge; you have to make something new out of it,” said Lanvin men’s wear designer Lucas Ossendrijver, who cited Japanese woolen mill Nikke among the standouts. “More blends will come out on the market, which I think is more interesting as yarns are a lot more advanced than in the Seventies.”

Several weavers at the show significantly raised prices, while others declined to quote prices in view of market volatility.

“Some prefer to give no prices at all as it means taking a big risk on margins,” said Philippe Pasquet, chief executive officer of PV, which ended its three-day run at the Paris-Nord Villepinte exhibition park on Feb. 10.

Sue Browning, director of fabric research and development at Express, said, “The entire industry is in flux — they are calculating and recalculating.”

Wool prices have risen by around 40 percent over the past year, with cotton prices leaping 160 percent, due to an imbalance of supply and demand. Contributing factors include flooding in major cotton-producing territories in places such as Australia, China and Pakistan, as well as rising demand for cotton from China.

However, while certain experts at the event claimed the price of apparel items could rise by 15 percent as a consequence of the high cost of raw materials, designers at PV seemed generally unruffled by increases on fabrics.

“Maybe for plain cotton items it will cause a problem, but for special items, people are willing to spend,” said Dior Homme’s creative director Kris Van Assche.

“I still think [the increase in prices] is very acceptable when it concerns quality product, with quality of cut, material and ideas,” said Jil Sander, who was shopping for fabrics for her +J collection for Uniqlo.

Both Sander and Raf Simons, who also attended the show, lauded Limonta’s collection.

“It’s dramatic, but doesn’t seem to have affected business yet,” Martin Aveyard, design director at vertical British woolen mill Abraham Moon, said of the cost increases. “In fact, people are placing orders earlier as they are worried wool prices will increase, and they probably will.”

Manish Arora, who was shopping for fabrics for his first spring collection for Paco Rabanne, as the house’s new creative director for women’s wear, lauded the high-tech fabrics at Italian Converter.

“They’re very modern, using multitechniques on one material,” he said.

Collections brimmed with an array of bright colors and prints, from neon-printed silks at Mantero to an array of fun Thirties-style designs, like a banana motif woven fabric by Estamparia Têxtil Adalberto Pinto da Silva.

While synthetics continue to benefit from cotton shortages, the cycle could shift again, predicted Roger Lee, managing director at Tecnon OrbiChem, a London-based marketing consultancy specializing in the chemicals, petrochemicals, plastics and fibers industries. “What we are seeing is not a sea change, it’s a dip due to natural disasters. Cotton production is forecasted to increase and the likelihood is that the cycle will repeat itself again. I don’t think that the consumer will see a huge increase other than his cotton shirt will cost a bit more.”

At Texworld, which ran from Feb. 7 to 10, the mood was mixed, with some exhibitors staying away due to the Chinese New Year and political turmoil in the Arab world. The stand for Egypt’s Wagdy Moamen Weaving Mill was empty, with a sign saying its representatives were unable to attend due to the political upheaval.

Sherif Moamen, the company’s vice president, said by telephone that the mill had initially been forced to close for seven days due to a government-imposed curfew, but had since returned to normal working hours.

“It’s still really tough,” said Natalie McGuinness, buyer for ladies’ formal tops at Marks & Spencer. “We’re looking to do more fabric auctions than we have done before, pooling together all our meterage across the business to try and get better leverage of scale. We’re also looking to different countries to manufacture in to gain duty benefits,” citing Cambodia and Bangladesh as fiscally attractive.

Tim Robert, sales director at Chadwick Textiles Ltd., a British supplier of sportswear fabrics and garments, said prices of nylon and polyester had risen 15 to 20 percent in the last quarter of 2010.

“On some of my basic fabric items that I import into the U.K. and then sell on to Europe, I need to find the same items cheaper,” Robert said. “I’ve had some success at that, but the sportswear suppliers are limited on knits and wovens,” adding that Texworld was traditionally stronger on linen, lace, denim and heavy wovens.

A group of Pakistani denim producers attended the show despite a disastrous season that saw much of the domestic cotton crop swept away by floods. Muhammad Irfan Aslam, manager of fabric sales and marketing at Azgard Nine Ltd., said the company had been forced to raise prices 60 to 70 percent last year due to the cotton shortage.

“Some of the buyers who are our partners, they are accepting those increases, but of course not to the extent to which we had to pay for cotton and yarns,” said Aslam, adding the situation would not improve until the new cotton crop arrives in September.