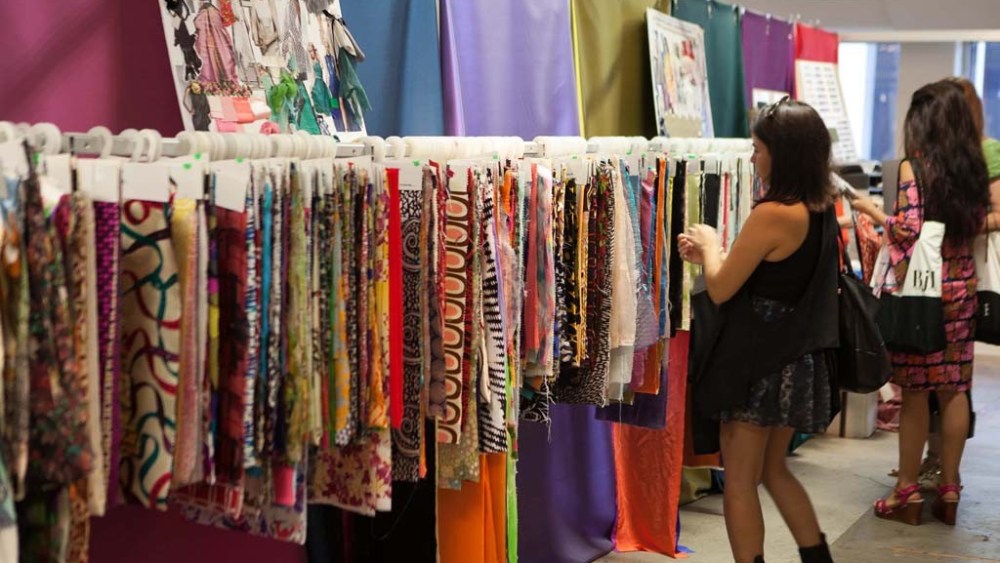 Attendees perused fabrics and trims, as well as design and production services, from companies based in California, Illinois, Thailand, Japan, France and a slew of other countries at the three-day show that ended Oct. 1 at the California Market Center. The Korea Federation of Textile Industries and Korea Trade Investment Promotion Agency sponsored 20 booths as part of Global Korea Textile Week held on the first floor of the market center. A section organized by Lenzing featured 24 exhibitors specializing in knits made of viscose, Modal and Tencel.

The ongoing recovery of the national economy, coupled with a heightened demand for newness from retailers, has contributed to a spate of new fashion businesses. While the number of potential customers is growing, their orders aren’t necessarily yielding sizable volumes. In particular, the up-and-coming designers gave a boost to mills that set low or no minimums for orders.

The plethora of apparel companies in Los Angeles enticed South Korea’s CNC Fashion to exhibit at the trade fair for the first time. Even though it set a minimum of 1,000 yards for a one-month turnaround of orders, it did well with allover lace spun from nylon and spandex costing $2 to $3 a yard that designers selected for making women’s tops.

Blue Jeans Denim, a mill from Thailand that charges about $5 a yard for its fabrics, learned at the show that its mandate of 5,000 yards an order was too high. “Everybody is inquiring about 1,000 yards,” said H.M. Guha, a director at Blue Jeans Denim.

On the other hand, U3 Textile from China made adjustments for the local market by offering exceptions to its 1,000-yard minimum. Jayce Tu, vice president of sales, said he could produce as little as 20 yards, albeit for a higher price. U3’s jacquard and ponte usually cost about $3 a yard.

Other vendors benefited from the Made in USA resurgence.

Mansfield Textiles Inc., a Vernon, Calif.-based producer of novelty knits such as yarn-dyed heather French terry and metallic stripes mixed with low-gauge slub cloth, priced at $2.50 to $7 a yard, said sales have increased about 20 percent in the past year.

“There’s more of a trend to manufacture and produce in the U.S. and ship [fabrics] to other countries than to ship it from [mills in] China and Korea,” said Warren Zaretsky, vice president of sales at Mansfield, who returned to the trade show for the first time in five years.

Valdese Weavers, which weaves jacquard out of cotton, polyester and viscose for $8 to $12 a yard in Valdese, N.C., appeared to have a smooth transition from furniture upholstery to apparel, judging by the popularity of its offerings at the show. Requiring a 30-yard minimum and four weeks between placing an order and shipping, Valdese Weavers attracted fashion designers with its dainty Lurex patterns that resembled foulard scarves and green animal stripes.

That’s not to say business is a breeze for designers who shopped the expo. Online flash-sales and fast-fashion retailers continually pose challenges for Nathalie Seaver, owner and designer of a namesake women’s line of contemporary sportswear and special-occasion dressing in Los Angeles. To differentiate her designs, she sought a variety of organic fabrics, polka-dot prints and other textiles that would fit in her budget of $30 a yard. “It does start with the fabric for me,” she said. “It can’t be too generic.”

For Galina Sobolev, founder and designer of Single, also based in Los Angeles, mills that held inventory in stock were coveted as she was still buying fabrics for her summer 2015 collection. For her following fall grouping inspired by Russian Fabergé eggs, she liked the digitally printed styles from Italy’s Miroglio that layered paisley, feathers and flowers at a price of $7.95 to $16.95 a yard.

The policy of stocking all its fabrics at its headquarters in Sydney helped keep Martin & Savage busy at the show. With no set minimum for orders, it did brisk business for lace appliquéd on cream and black checks, blue kaleidoscopic prints and other styles selling from $2.50 to $22.50 a yard.

The trade show continued to expand its offerings by introducing companies that could help designers with making patterns, samples, garments and even marketing their wares. Jennifer Loel Designs from Cotati, Calif., and Chicago’s V. Mora both made their debuts in Los Angeles.

Even textile designers see a need for extending their brands. Minneapolis-based Josi Severson crafted the domestically printed fabrics that she designs herself into loop scarves and strapless dresses, wholesaling between $18 and $46 apiece.

“You’re limiting yourself by selling only to designers,” she said. “It’s a good way to diversify.”