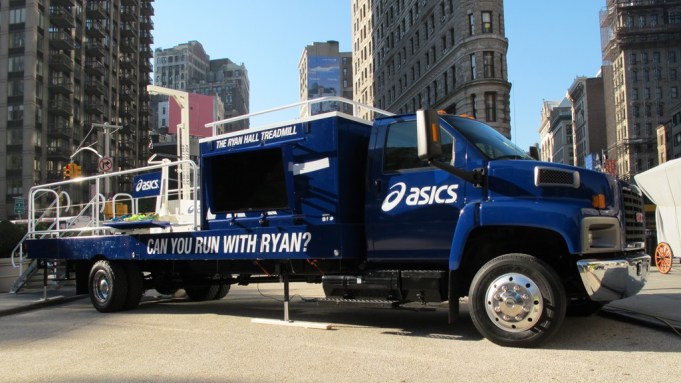 It’s time to move on.

With last year’s 11th-hour cancelation still fresh in their minds, organizers, sponsors and athletes participating in the New York City Marathon are eager to put the past behind them as they get ready to line up Sunday on the Verrazano-Narrows Bridge for a bird’s-eye view of the five boroughs.

The 43rd running of the race is expected to draw as many as 48,000 runners from all 50 states and more than 100 countries and attract some 330 million global viewers.

Last year, Superstorm Sandy caused the city and the New York Road Runners, the race’s organizers, to call the race off after a groundswell of opposition emerged. It was canceled on Friday afternoon, less than 48 hours before the start and after many athletes had already arrived in town.

Even so, according to a NYRR spokesperson, the group has not seen any backlash and its expected participants is “consistent with the field size of past years.”

The number of sponsors is also similar to other years and includes the title sponsor, ING, as well as Foot Locker, Timex, United Airlines and The New York Times. Asics has also returned as the race’s official apparel and footwear sponsor, an association it has had for more than 20 years.

“People are ready to move on,” said Shannon Scott, director of marketing communications at Asics America. “After a while, you have to stop focusing on the negative.”

This year, the brand has a number of marathon-related initiatives including a “We Are Marathoners” marketing campaign that features a traveling treadmill activation and limited-edition commemorative sneaker.

“We came up with a fun idea, which was Run With Ryan,” Scott explained. The company has challenged runners to attempt to run 12.6 miles per hour on a specially equipped treadmill with a harness — the 4:46 per mile pace that elite marathoner Ryan Hall can hold for 26.2 miles. For every minute a runner can hold the pace, Asics will donate $5 to the Mayor’s Fund to Advance New York City, a youth-development program.

The treadmill will travel around the city until race day.

Asics also blanketed the city with “We Are Marathoners” ads that celebrate the average runner. The ads are featured on New York City buses as well as in activations at Time Warner Center and commemorate the one percent of people who ever actually complete a marathon, Scott said.

At the marathon expo at the Jacob K. Javits Convention Center, the brand has a 30,000-square-foot booth that showcases its special marathon collection of apparel, as well as limited-edition Gel-Kayano 20 and Gel-Nimbus 15 shoes that feature a map of the marathon on the insert and other special markings. The shoes are also available at other retailers in the city, including Paragon Sports, Champs and Foot Locker.

Scott said the performance of the special marathon apparel is always contingent on the weather. “If it’s supposed to rain, we sell jackets; if it’s supposed to be warm, we sell short-sleeve shirts,” she said. “But we always do a nice business with outer shells that provide warmth as a layering piece and also serve as a souvenir.”

Other brands also have high hopes for the marathon.

C3fit, a new line of compression apparel, will have a booth within the Paragon Sports store at the expo to introduce its socks, tights, and calf and arm sleeves to the American market. The brand is the second-largest compression brand in Japan.

Arnaud Claude, head of sales, said to attract the running community, the brand is offering whimsical patterns such as hearts and polka dots as well as an array of fashion colors. “It seems the marathon customer likes color,” he said.

The brand introduced its line last year at the expo, but was thwarted by the cancelation. “But that made us want to come back even more,” he said. “We were blown away by the way people reacted. They weren’t happy about the cancelation, but they weren’t angry either. That was a real eye-opener. So this year, we doubled the size of our booth.”