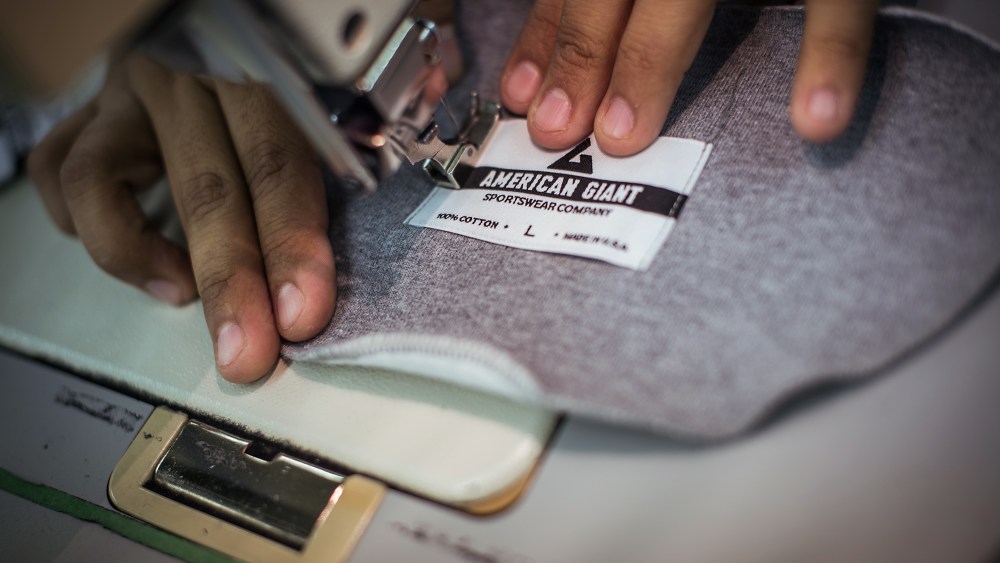 The “greatest T-shirt ever,” made in North Carolina, could be born today.

American Giant, which has garnered much attention and acclaim for the “Greatest Sweatshirt” ever — a hooded zip-up style that wound up having long waiting lists over the last few years, now has a T-shirt counterpart. It’s being launched Monday on the e-commerce-only American-Giant.com.

Made in America isn’t a strategy or a movement for American Giant and its founder and chief executive officer, Bayard Winthrop; it’s the thread that’s woven through the brand’s cotton sweatshirts and T-shirts. The four-year-old e-commerce company counts on U.S. production as the heartbeat of its operation and success, Winthrop explained in a recent interview on a trip to New York.

The “Premium T” will sell for $34.50 and is the result of months of product research and development, Winthrop noted. The women’s T-shirt comes in crew or V-neck styles in colors including jet-black, pearl, evening blue, burnt sage, shell pink and ice blue.

Made from Supima cotton slub yarn, the T-shirt has “weight and substance” — 6.1-ounce fabric — similar to its sister hoodie sweatshirt that had customers, bloggers and magazines declaring it the “Greatest Sweatshirt” ever or the “Great American Sweatshirt.”

The men’s T-shirt has a slightly wider color array and is made in 6.6-ounce combed ring-spun cotton. Both fabrics are slightly heavier than standard T-shirt fabric.

The T-shirts feature a ribbed, knit-collar band, double-stitching along the inner neckline and cotton tape detail at the side seams, all details Winthrop said require extra steps in the production line, along with experimentation on the yarn and fabric development.

“When the company was launched in 2012, it was based on the belief in the validity of U.S. manufacturing and the supply chain,” said Winthrop, an entrepreneur who has headed a number of manufacturing and consumer-products businesses, including accessories and apparel company Chrome Industries before opening American Giant. “The object was to create the next great American brand. The challenge was to strike the right balance between quality and price without deviating from our standard of only using U.S. production.”

Winthrop said it “was really gratifying to get that kind of response” to the sweatshirt.

“But it also represents the fact that we really want to create exceptional American-made products,” he continued. “I hope the T-shirt has the same response, but we leave that to others to decide.”

Winthrop said the waiting list for the sweatshirt came about due to the unanticipated demand and the newness of the operation. Now that production is ramped up and more sophisticated, he doesn’t anticipate the same situation.

Officially headquartered in San Francisco, American Giant manufactures and sources its fabric and materials in the Carolinas, notably Carolina Cotton Works in Gaffney, N.C., and Parkdale Mills in Gastonia, N.C.

Winthrop noted that the company has also invested in three cut-and-sew factories in Raleigh, N.C. , which employ about 300 people combined. American Giant also works closely with the cotton supply chains, including farmers, ginners and yarn spinners.

American Giant has been able to make Made in America viable for several reasons. As an e-commerce business, its overhead allows for a greater percentage of costs to be put into production and materials. As the cost of power has lowered in the U.S. compared to Asia, it has served as a counter balance to higher average production costs.

Winthrop said having a knitwear business also plays into cost control as products such as T-shirts and sweatshirts generally have “less touches and are easier to make then wovens.” Automation in yarn and knitwear production has also allowed for greater capacity without a large increase in labor costs.

“In our case, the way bigger catalysts are in costing and the fact that all our factories operate on a Team Sew method,” Winthrop said.

In the Team Sew approach, adapted from Toyota’s manufacturing process, the seamstresses work on their feet, performing multiple operations and in constant collaboration. Instead of the standard assembly line model, handlers and sewers work in a more circular setup, allowing for flexibility in the process.

This almost always means greater efficiency for the company and more incentives and greater financial reward for the workers.

While declining to give exact revenue figures, Winthrop said American Giant has grown to have sales in the “tens of millions of dollars.” Sales are about 60 percent men’s wear and 40 percent women’s.

The customer profile is 25- to 35 year-olds, with a “Coastal cluster,” meaning East and West Coast predominance, although sales in the Midwest are growing.

“We’re very much part of the ath-leisure movement and are benefiting from the desire of young people and overall for values-based brands,” Winthrop said.

Sweatshirts range in price from about $59 to $89 and make up the largest category, but a growing area is women’s sweatpants, which now make up 11 percent of sales.

“They are better made and designed, and the confluence of ath-leisure and workwear has made them more appealing for everyday use,” he added.

American Giant has been able to utilize domestic manufacturing to produce quality apparel at scale. With a compressed supply chain in the Carolinas, the company has created an innovative apparel production model to make American-made not just a reality, but a viable option for today’s brands. U.S. textile and apparel manufacturing, particularly yarns and knitwear, has seen a resurgence of business in the last few years, especially in the Carolinas and other areas in the South, and pockets of New York and Los Angeles.

In addition to using cotton from local farmers and Supima cotton farms in California, the raw cotton is then cultivated and processed at companies such as Parkdale Mills. Cotton bales are blended to create consistent cotton fibers derived from different fields and harvests, just like blending grapes to get a consistent cabernet. The fibers are then spun into yarn at Parkdale.

At facilities including Clover Knits, in Clover, S.C., the raw yarn is knitted into fabric by knitting machines specifically tuned for the type of fabric being produced. American Giant’s fleece was particularly hard to create, taking nearly a year to develop. At Carolina Cotton Works, the knitted fabric arrives as greige, or undyed, cloth, where it is then dyed and finished.

Finally, at plants such as Eagle Sportswear in Middlesex, N.C., the cloth is spread and cut in preparation for assembling the finished product.

“Consumers have adopted a different view toward how they buy,” Winthrop added. “They want quality not just price, and they they want to know that what thy are wearing is going to last and give them satisfaction. Change is coming in a major way. There’s a genuine desire for American-made.”