Nicaragua emerged as one of the new kids on the sourcing block in the wake of the Central American Free Trade Agreement, but could face challenges as global... 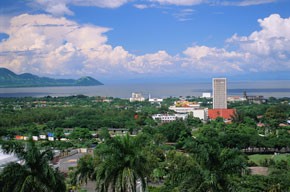 WASHINGTON — Nicaragua emerged as one of the new kids on the sourcing block in the wake of the Central American Free Trade Agreement, but could face challenges as global economic forces exert pressure on trade.

Just over two years have passed since Nicaragua fully implemented CAFTA. Like other countries in Central America, Nicaragua emerged from years of political and economic strife to become an attractive, nearby place for U.S. companies looking to diversify sourcing, counteract rising costs in some Asian countries and enhance speed-to-market.

In 2007, textile and apparel companies in Nicaragua exported $968.2 million worth of goods, a 10.1 percent increase from the previous year. Denim products, shapewear, knit tops and casual and workwear bottoms are key categories being produced in the region. Textile manufacturers are producing denim and twill there as well.

As of February, there were 66 apparel companies and two textile firms operating in Nicaragua’s free trade zone.

In a speech given in Nicaragua in February, Christopher Padilla, undersecretary of international trade for the U.S. Commerce Department, said Nicaragua had seen more export growth from CAFTA than any other country.

“Nicaragua has the most flexible and open market treatment for textiles of all its Central American partners,” he told the American Chamber of Commerce of Nicaragua.

Cone Denim opened a production facility outside the capital city of Managua in April that has a capacity of 28 million yards annually of finished denim fabric, according to the company. The factory will employ about 850 people.

Tom McKenna, president of Cone Denim, said the firm sees Nicaragua as a key platform for its denim production in the Americas.

“Nicaragua has tremendous jeans potential,” he said. “We have been encouraged by the amount of investment we’ve seen [in the country] and expect to see in the next year or two.”

Some companies, such as Montreal-based Gildan Activewear, have operated in Nicaragua since before CAFTA. Gildan has two sewing facilities in the country, established in 2004 and 2005, that manufacture T-shirts, polo shirts and underwear. The company employs 3,000 people in Nicaragua, said Claudia Sandoval, director of communications for Gildan Centro America. Strategic location, trade benefits under CAFTA and the availability of labor were factors in the company’s decision to establish operations in the country, she said.

General Sportwear, which manufactures denim jeans for Kohl’s, Belk, Vanity Fair and Old Navy, has been producing garments in Central America since 1993. A few years ago, the company shifted 60 percent of its cutting and sewing capacity to Nicaragua, said president Jeff Rosenstock.

Low-cost labor in Nicaragua and a preponderance of denim manufacturing there made it an attractive location, he said. The company opened a 100,000-square-foot facility last year that employs 750 people. The initiative has been “very successful,” Rosenstock said.

“Fashion is all going the way of Asia,” he said. “We can’t compete with those items. But basic items, where speed-to-market and reliability come into play, there is room for that business to be in [the Western] Hemisphere.”

Much of the draw to Nicaragua for apparel companies comes from benefits and incentives derived from the regional free trade agreement, which includes tariff preference levels and tax incentives.

The tariff preference levels only granted to Nicaragua under CAFTA are important, sources said, because they allow companies to manufacture goods made with up to 100 million square meter equivalents of cotton and man-made fabric produced outside the CAFTA region.

With challenging times ahead for industries all over the world, it’s uncertain whether Nicaragua can sustain the growth it has seen since CAFTA was implemented.

“Historically, denim apparel production has been a strong engine of economic growth and employment in some of the poorer developing countries,” said Helga Ying, director of worldwide government affairs and public policy for Levi Strauss. “I think it still can be today, but I am concerned about recent trends in trade policy that are making it difficult for denim-apparel producers in some of these countries to compete.”

Trade experts also noted that wages in Nicaragua have gone up significantly in the last year as the government tried to address inflation. Average monthly wages increased on Feb. 1 by 15 percent to 1,901 cordobas, or about $100. That followed an 18 percent wage hike last summer.